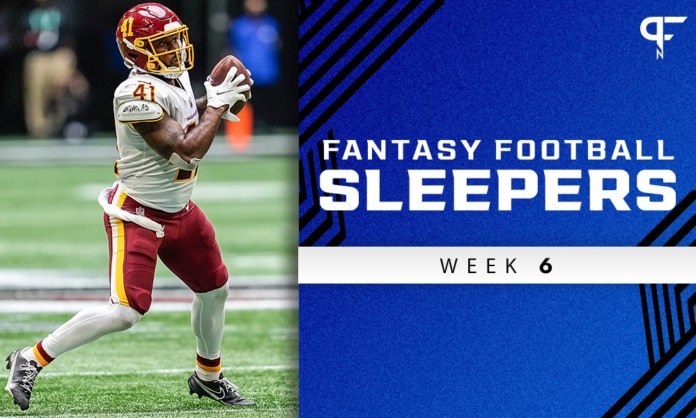 It's easy to play your stars in fantasy, but what about under-the-radar players? Let's take a look at fantasy football sleepers for Week 6.

There are sleepers, and then there are fantasy football sleepers. The former encompasses all of us. The latter encompasses a select few — the players who might make or break your season. They are not obvious calls. But their Week 6 upside is too good to ignore, so let’s dissect some potential fantasy sleepers heading into this week’s action.

Which Week 6 fantasy sleepers should you target?

Let’s look at a few undervalued players who could perform well in Week 6.

How did J.D. McKissic earn only 3 touches in Sunday’s home loss to the Saints? Antonio Gibson has been playing hurt. Taylor Heinicke couldn’t connect enough with Terry McLaurin. Curtis Samuel was knocked out early. Undrafted rookie Jaret Patterson doubled his career rushing attempts with 4. What the heck happened?

Reportedly, McKissic was battling an ankle injury heading into Week 5. Last year, he was the 17th-best fantasy RB while leading all backs with 110 targets. He’s flashed again this season, finishing as the seventh-best RB in Week 2 while ranking as RB14 in Week 4. Next week, McKissic will face a Chiefs defense that’s yielding the third most yards per carry (5.2) and is tied for the most rushing scores allowed (9). Keep an eye on his practices this week. If he’s good to go next weekend, he’ll be an under-the-radar bargain.

When Clyde Edwards-Helaire got hurt on Sunday Night Football, all eyes turned to Darrel Williams and Jerick McKinnon. How will these two split touches going forward? While it’s still too early to know, Williams has the edge over the 29-year-old McKinnon, who hasn’t been the same since two brutal season-ending injuries marred a once-promising career. The Chiefs fed Williams down the stretch and should feature him as no less than a 1A RB next weekend against a beatable Washington club.

Here are two rookies that might augment your fantasy rosters on Sunday.

Javonte Williams and Co. are facing a Raiders defense in Week 6 that has yielded 4.6 yards per carry and 7 rushing scores. The rookie back has gradually asserted himself as Denver’s most efficient rusher. Don’t buy into his declining usage the past two weeks. In both instances, the Broncos were playing from behind. In their three wins, Williams has averaged a healthy 14.7 touches. The touchdowns will come.

Meanwhile, Melvin Gordon has slowed since his Week 1 breakout. Despite racking up a couple of scores, he’s run relatively poorly in three of his last four games: 2.4, 3.3, and 3.8 yards per carry. From a distance, this looks like a split backfield — and in many ways, it is. But Williams is the future and is arguably more talented this season.

Remember when Trevor Lawrence was struggling? Despite his team’s struggles, the highly touted rookie posted nearly 18 fantasy points in Week 4 and was in the top 10 among QBs in Week 5. Next up is a home tilt against one of the league’s worst passing defenses in the Dolphins.

Jacksonville’s recent acquisition of Dan Arnold has ever so slightly helped compensate for the loss of DJ Chark, while James Robinson’s dominant running has kept the chains moving a little more than expected. Lawrence is a fantastic streamer next week and should be available in most leagues.