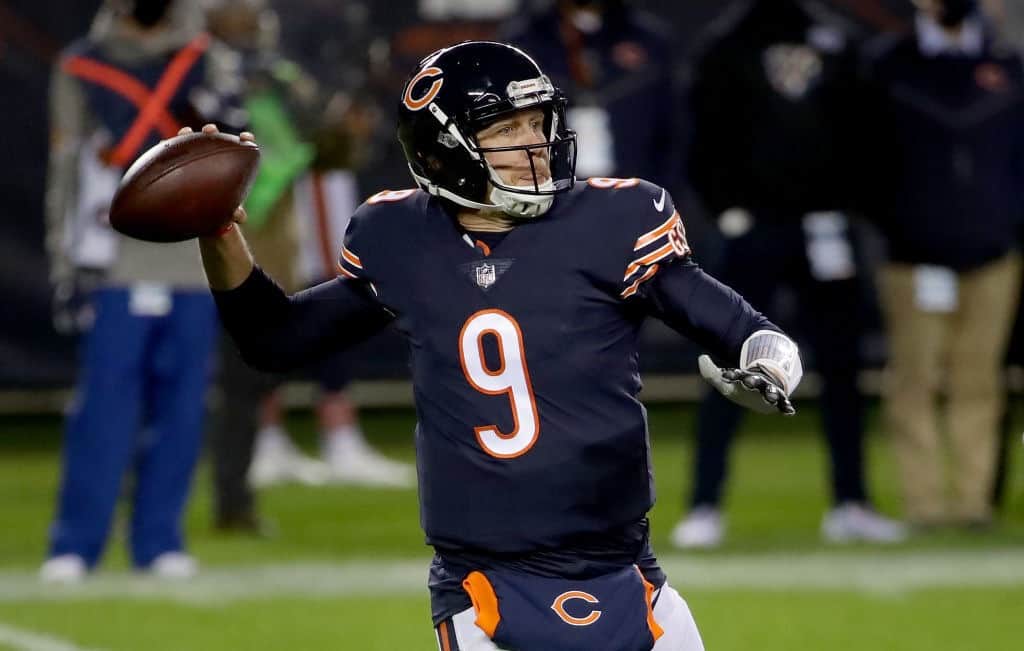 The Chicago Bears couldn’t have asked for a much better game from Nick Foles on Thursday night. Thursday was Foles’ second appearance as a starting quarterback for the Bears, as he led them to their fourth win this season. The Bears now find themselves with a 4-1 record for the first time in nearly a decade. There were several things that went right for the Bears to secure the victory, but Foles’ performance really added some real value to the Bears in their success.

Things just seemed to click for Foles on Thursday. After a bit of a slow start, he seemed to adjust and really dialed in on his receivers. His accuracy and aggressive targets were well above average, which is a must-have when playing a higher-caliber defense like Tampa Bay.

While there were several skill players on the Bears offense that had a good night, Foles’ performance carried a higher influence on the team’s overall success. When measured on his individual performance, Foles put up an OVM grade of 33.56. This is a fantastic grade for a quarterback. While it’s not unusual for a QB to score above a 30.00 on the metrics, these are normally grades that we’ll find when a passer has a near-elite performance.

This type of quarterback influence is exactly what head coach Matt Nagy was hoping for with the decision to sideline Mitch Trubisky last week. For comparison, since the 2018 season, Trubisky had only outscored Foles’ Thursday night OVM grade just one time — Trubisky scored a 37.14 OVM in Week 13 of 2019. It’s obviously way too soon to call this move an upgrade, but there’s definitely a sigh of relief in Chicago right now. 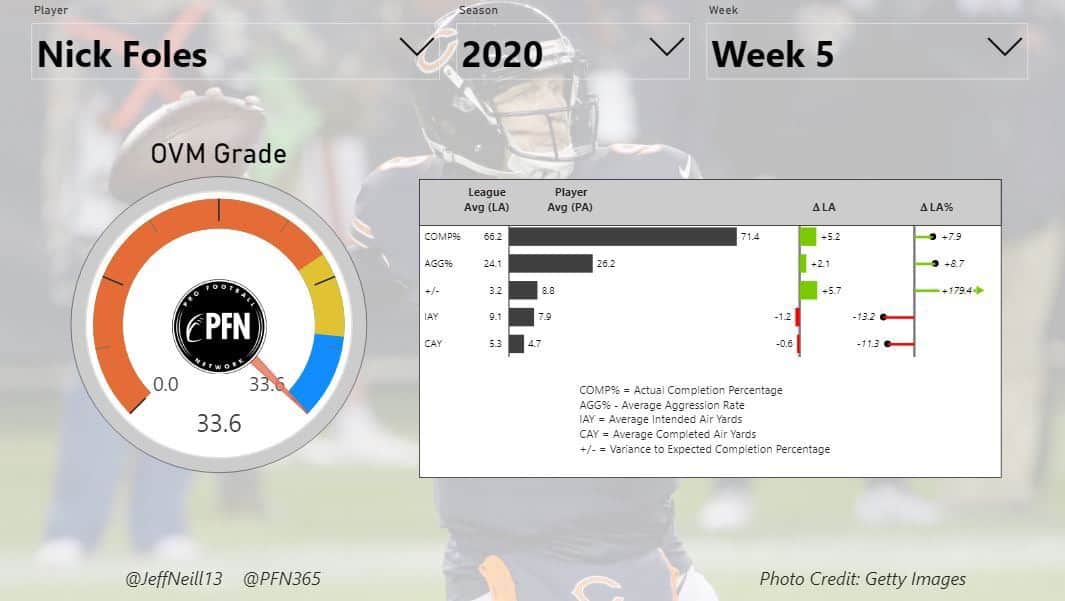 Foles ended the day with 30 completions for 243 yards and a touchdown. His completion percentage was a solid 71.40%. He also managed to find some tight windows with his receivers with an aggressive pass percentage of 26.20%. He had one interception on Thursday, but that was the only real blemish on his stat sheet.

Foles’ touchdown came late in the second quarter, just seconds before the half, putting the Bears ahead by one (after the PAT) heading into intermission. His 12-yard connection to Jimmy Graham was his only passing touchdown on the night but was the momentum swing that the Bears needed at just the right time. Allen Robinson, Foles’ leading receiver on the night, put up 90 total receiving yards by the end of the game.

Foles’ awareness in the pocket was good, and he was able to handle pressure fairly consistently from the Tampa Bay defensive line. He established chemistry with Robinson as well as running back David Montgomery throughout the night. Robinson was targeted 16 times during the game; Montgomery was targeted eight.

The Bears moving forward in 2020

It’s safe to say that Nagy will stick with Foles for now as the starting quarterback. The next several weeks will give a good opportunity to see what the future will look like with Foles facing the Rams and Saints. But if Foles can keep up the consistency, and the Bears defense can do their part, this could be a great season for Chicago.

There is the looming concern of injury, however. Foles does have somewhat of a history of being sidelined. The offensive line will have to ensure that they can keep Foles protected if they want him to be the new QB1 for the remainder of 2020.

Overall, this is an exciting time for the Bears. Their last 4-1 start back in 2012 ended in a 10-6 record. That should be good enough for a post-season shot in 2020. If Foles truly is an upgrade at the quarterback position, he might be exactly what Chicago needed to become a contender.