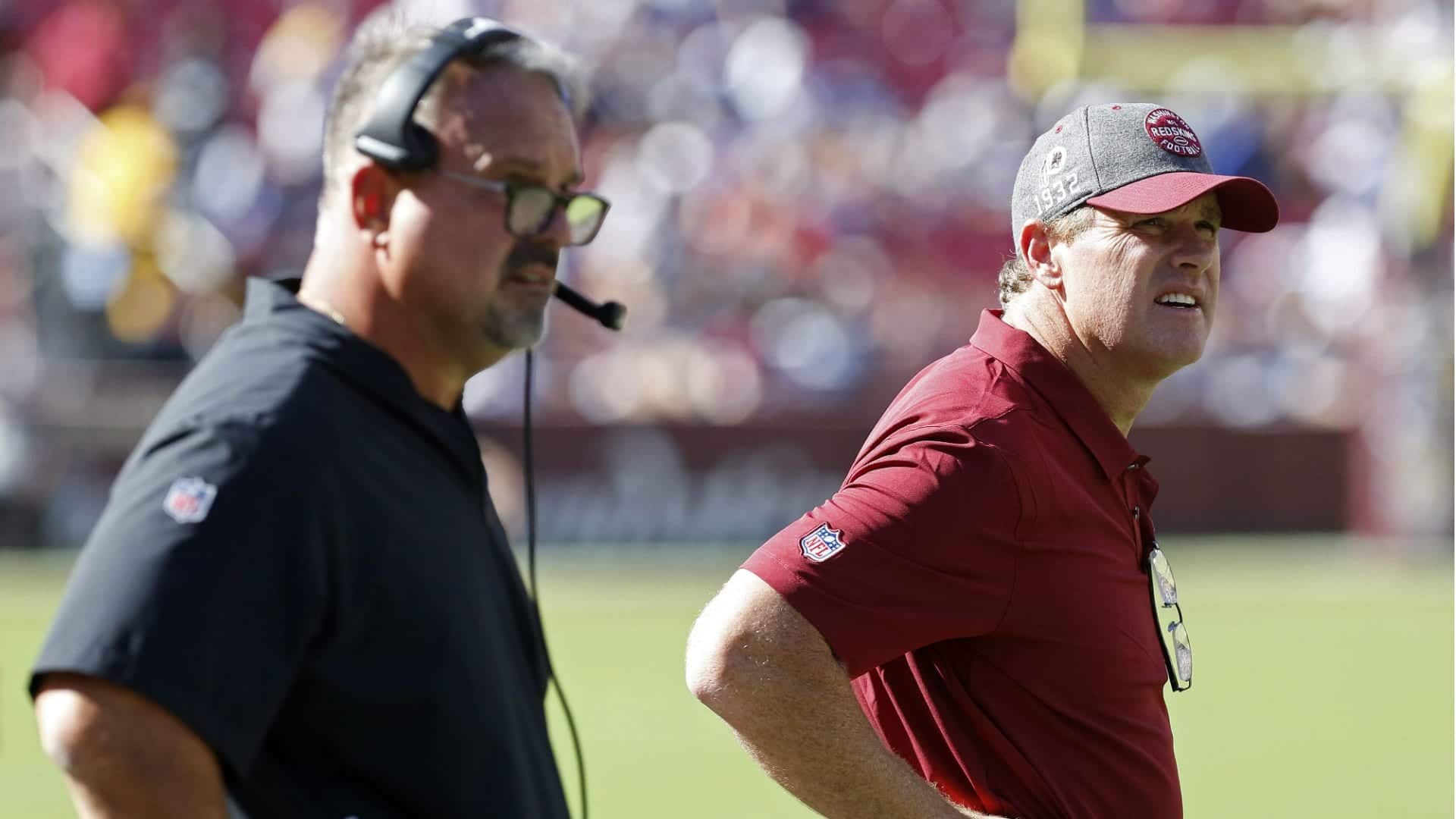 After a tumultuous beginning to the 2019 NFL season, head coach Jay Gruden has been fired by the Washington Redskins. The Redskins will make OL coach and assistant head coach Bill Callahan their interim coach for the remainder of the season.

The move comes as little surprise, rumors of the parties parting ways have been circulating for the past few weeks. Pro Football Network’s own Bill Riccette wrote an excellent piece earlier this week on how hot Gruden’s seat was. The Redskins are still winless on the year, suffering through a mess at the quarterback position, and arguably viewed as one of the worst teams in the league. It has been a long, difficult road for Gruden and the team, but the rebuild officially begins now.

After news of head coach Jay Gruden being fired, general manager Bruce Allen called a press conference for this afternoon. He obviously had a number of questions to answer regarding Gruden and the direction of the Washington Redskins. The team has started the season 0-5 and suffered an embarrassing loss to the New England Patriots this past Sunday.

Allen started the conference by naming Bill Callahan the acting head coach of the team. He has been in charge of the running game since his arrival in 2015. Kevin O’Connell will be taking over play-calling duties as he auditions for a head coaching job as well.
He then spoke about his conversation with Gruden early this morning. According to some media reports, Gruden arrived at the Redskins training facility at around 5 am. Allen spoke with him nearly an hour later to inform him that he was no longer the head coach for the team.

#Redskins President Bruce Allen is addressing reporters on @nflnetwork: “It was a brief conversation” with Jay Gruden to fire him. More Allen: “To make a decision like this was difficult, but it was necessary. We had much different expectations for the beginning of the season.”

It wasn’t a surprise for Gruden, he was quoted after the loss Sunday saying “If my keys still work, ill be there Monday morning”.

Obviously, the next couple of questions revolved around rookie quarterback Dwayne Haskins. Gruden had been criticized for the way he handled his new play-caller, and Allen was asked if Haskins would now be named the starter. He was vague but ultimately left the decision up to new head coach Callahan.

#Redskins President Bruce Allen on the QB plans: “It’ll be up to Coach Callahan who plays at any position. We’re thrilled to have Dwayne here. We think his future is bright.” But says it’s up to Callahan.

Lastly, Allen denied rumors that Gruden was let go because of unsubstantiated claims of a video being released where the former head coach seemed to be inebriated. He made it very clear that Gruden was not let go for cause.

Drama in the offseason

Gruden had been the head coach for the Washington Redskins since the 2015 season. His career with the Skins started off quite promising with a division title in only his second year at the helm. Unfortunately, since then, he has a combined .423 winning percentage as the coach, which ranks 18th all-time in Redskins history. Obviously, the slow destruction of the team cannot all be put on Gruden’s shoulders. Some of the Redskins problems started before the first kickoff of the 2019 season.

The troubles for this Washington team started during this past offseason when star left tackle Trent Williams decided to hold out. It came as a surprise to many, but the 31-year-old staple of the Redskins offensive line decided to step away from the team. Williams has not spoken publicly about the reasons for his holdout but it is believed that he is upset with the team’s medical staff and does not trust the organization.

Williams has been with Washington for nine seasons and is seen as one of the leaders in the locker room. He has lost close to $4 million in fines and missed game checks during his holdout. Allen and the team have refused to extend him to a lucrative deal, and have yet to trade him. While the left tackle has been away, the team has given up nine sacks and the run game has been inefficient. The team has allowed an asset that could bring in a lucrative return waste away. The mishandling of the Williams situation was just the beginning of the end for Gruden.

The mistakes have been piling up

Many pundits deemed the Washington Redskins performance during the 2018 NFL draft one of the best. The best decision of the draft for the team was apparently grabbing Ohio State sensation Dwayne Haskins 15th overall. Haskins was expected to go early in the top-10, but instead, the local Maryland kid became a Redskin. Fans were in a complete state of ecstasy when they saw Haskins put on the red and gold. What followed was another example of complete and utter mismanagement by the organization.

Rumors started to surface during the offseason that Gruden didn’t want to draft Haskins. According to reports, it was the front office that made the decision to get the quarterback at 15. Nothing seemed to come from these reports early on, and the excitement of the beginning of the season silenced most criticisms. Case Keenum and/or Colt McCoy were named the starters with Haskins as the backup.

“A person with knowledge of (Jay) Gruden’s thinking has confirmed that the head coach did not want (Dwayne) Haskins.”

As was heavily rumored on draft day, Haskins was handpicked by #Redskins owner Dan Snyder.https://t.co/90zzXrHHt5

The team was completely embarrassed the first three weeks of the season, and Keenum put up terrible performances. In Week 4 against the New York Giants, Gruden decided to inject Haskins into the middle of the game to provide some motivation to the team. He threw in a rookie quarterback, who has had little time to work with the starters, and who has heard rumors all season of his head coaches disdain for him. Obviously, Haskins didn’t look great. What does this all mean? Gruden injected a rookie quarterback into a game that he wasn’t ready for when it was already out of reach. He completely mismanaged his rookie “franchise” quarterback.

Redskins owner Dan Snyder was reportedly furious after the team’s loss to the Giants. He left the stadium and refused to speak to media. Haskins finished the game 9-17 for 107 yards and three interceptions. He had the second-lowest Offensive Share Metric of the year with 10.19.

The mishandling of Haskins could have finally been the last nail in the coffin for Gruden. The terrible win percentage and complete lack of any accolades besides a single division title also contributed to his firing.