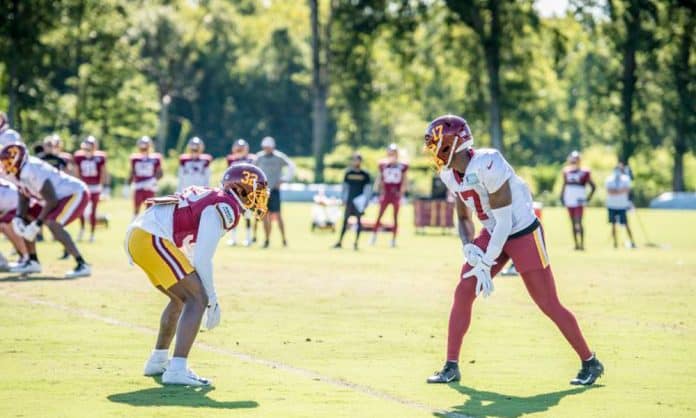 Tough decisions are on the horizon in D.C., and very few players are safe. Who do we see staying on the squad in our Washington Football Team roster prediction for 2020?

There hasn’t been an offseason quite like this in Washington for a while. Long stuck in coaching purgatory, the Washington Football Team now seems to be setting off on the right foot and into a new era. How will Washington’s new coaching staff trim down the roster, and who will they choose to be on their final 53-man squad? This final Washington roster prediction for the 2020 season serves the purpose of attempting to answer these questions.

Dwayne Haskins has now officially been named the starter, which was unsurprising to most as he’s taken every first-team rep in camp and has performed well. Kyle Allen, meanwhile, has some utility as a backup and has a history in Washington’s scheme from his time with the Carolina Panthers.

The wild card here is Alex Smith. While Washington’s coaches would love to have him suit up on game day, he hasn’t yet taken contact in practice drills, and he might start the season on injured reserve with a designation to return, while he continues to re-train his leg.

Running back is surprisingly pretty straight-forward for Washington this year. Adrian Peterson, Antonio Gibson, and J.D. McKissic are all essentially locks for the roster. Peterson brings security and a veteran presence, while Gibson and McKissic both offer valuable versatility in Scott Turner’s scheme. Bryce Love appears to be in a battle with Peyton Barber for that fourth spot, and given his youth and relative upside, he seems like the pick.

The fifth and sixth spots deserve the most attention for Washington, as the first four-receiver slots are locked up. At times in camp, it has seem as though new names and journeymen could have proven themselves, but it now looks like the team will instead roster some familiar faces instead. Cam Sims has been particularly proactive, making plays at training camp with his 6-foot-5 frame, and Trey Quinn has the experience and nuance to be a solid backup.

Logan Thomas has gotten closer to seizing the TE1 mantle than anyone would have expected him to this offseason. With his athleticism and chemistry with Haskins, he’s firmly separated himself. Marcus Baugh has also gotten plenty of first and second-team work, and his history with Ron Rivera likely gives him an edge. Rivera could keep four tight ends, but he frequently kept only three in Carolina. Thus, Jeremy Sprinkle is a good choice to round out the pack, possessing good size and offers utility as a backup.

Talk about a “yikes” position group. Morgan Moses is a mediocre starter who has a chance to rebound from a relatively poor 2019 season, but behind him, there’s no proven talent to speak of.

Saahdiq Charles will likely start the season on the PUP list, or potentially even be designated to return on injured reserve. Geron Christian figures to be the starter at left tackle, but he has yet to generate any confidence since being drafted in the third round back in 2018.

Free-agent addition Cornelius Lucas was slated to be the swing tackle, but he reportedly hasn’t done enough to set himself apart from the rest of the depth players in camp. Consequently, the Washington Football Team traded for David Sharpe in a low-round pick swap. The trade of assets makes it seem like Sharpe has some roster security.

Given the uncertainty at tackle, I also have them keeping Timon Parris as a fourth option.

How the interior line shakes out will be an intriguing storyline on Saturday. The top three guys all have their spots locked; Brandon Scherff and Chase Roullier are both at least solid starters, while Keith Ismael, a fifth-round rookie, has versatility between the guard and center spots.

For the final two spots, it’ll likely be two of Joshua Garnett, Wes Martin, and veteran Wes Schweitzer. Washington has $4 million in dead cap to pay if they cut Schweitzer, but given that Garnett has been taking some first-team reps at left guard since his signing, they might favor him over the journeyman with less upside.

Generating pressure is one of the most critical functions of defense in the modern NFL, and the Washington Football Team shouldn’t have any trouble doing that this season. Chase Young and Montez Sweat form one of the most athletic, high-upside edge duos in the league. Behind them, seasoned veteran Ryan Kerrigan has the potential to thrive in a more efficient rotational role.

As is most often the case, the depth is where most of the discussion will take place at this position. Several players have cases to be kept, but I think 2019 seventh-round pick Jordan Brailford and 2020 seventh-round pick James Smith-Williams will be the choices. Brailford is an explosive edge rusher who’s healthy after missing all of 2019, and Smith-Williams has an intriguing size-athleticism combo that may give him security.

The first three interior linemen listed here have 37.0 total sacks since 2018. Matt Ioannidis, in particular, has been a wrecking ball on pass-rushing snaps, and his counterparts Jonathan Allen and Daron Payne bring a lot of upside heading into 2020.

Tim Settle returns for another season as the fourth interior lineman. He’s trimmed over 20 pounds since being drafted in 2018, and he should be able to provide a spark off the bench, as he did last year.

With Rivera and Jack Del Rio both being former linebackers, it’s no surprise that linebacker has been the most unpredictable position to track in the lead-up to Washington’s roster cutdown. The team has been rotating players through the first-team defense, and Thomas Davis, Cole Holcomb, Kevin Pierre-Louis, Jon Bostic, and Shaun Dion Hamilton have all gotten looks there.

Reuben Foster was poised to make a case for himself if he was able to offer Washington the Reuben Foster of old. However, he has not been consistent against the third-team offense, which doesn’t bode well for his roster hopes.

The team may instead keep Ryan Anderson, a run-defending linebacker with some versatility as a former edge rusher, and fifth-round rookie Khaleke Hudson, an energetic enforcer, and likely special teamer.

Washington could end up having three new starters at cornerback in 2020. Kendall Fuller and Ronald Darby, both free-agent acquisitions, are locked into those roles. Darby has particularly impressed in camp with his instincts and quickness. Fabian Moreau, meanwhile, has been phased out of the slot cornerback job by Jimmy Moreland, but he should still frequently rotate in on the boundary, as Fuller will no doubt be moving around the field.

Behind the starters, Greg Stroman seems like a sensible choice for the fifth cornerback spot. He’s been making plays all through camp and has rebounded nicely after missing all of 2019. With Fuller having been sidelined for a few days, Washington might want extra insurance at cornerback. Ryan Lewis can fulfill that role well, as he’s an elite athlete with some regular-season experience.

This was probably the group that a lot of people had at the beginning of the offseason, but there’s been a slight change in the order. Troy Apke is now expected to start at free safety, as opposed to free-agent signing Sean Davis.

Apke offers elite athleticism, and he’s reportedly been impressing with the first-team defense in training camp. Davis will back Apke up, and longtime special teams standout Deshazor Everett will likely reprise his role backing up Landon Collins.

This is the easiest part of our Washington roster prediction in 2020, as we are now at six years and counting with the same special team’s group. I love long snapper battles more than anyone, but I doubt anything’s changing here.