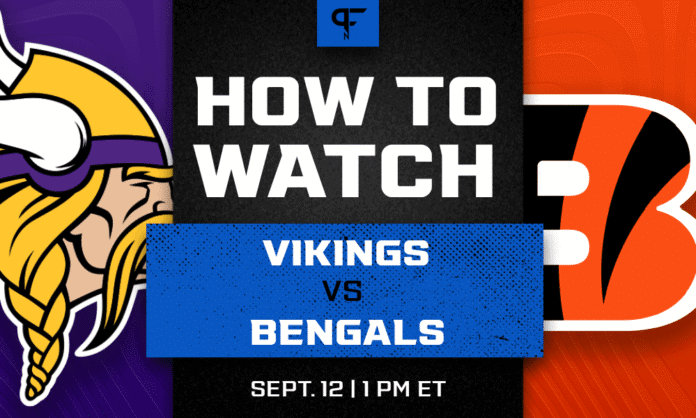 Vikings vs. Bengals prediction, how to watch, odds, and game preview for Week 1

What channel is Vikings vs. Bengals on, where can you live stream it, and what are the latest odds and predictions for the Week 1 tilt?

Following disappointing seasons in 2020, the Minnesota Vikings vs. Cincinnati Bengals game kicks off a 2021 campaign where expectations for both teams are much higher. Let’s take a look at the current NFL odds, TV channel, how to live stream, and a prediction for the Vikings vs. Bengals Week 1 NFL game.

The Bengals will welcome back to the field the No. 1 overall pick of the 2020 NFL Draft, Joe Burrow. Burrow had a strong rookie season last year before a terrible knee injury ended his year just 10 games into it. But in those 10 games, Burrow averaged 268 passing yards per game, including five with 300+ yards passing — third-most ever by a quarterback in their rookie season.

The Bengals also added Burrow’s former college teammate at LSU, WR Ja’Marr Chase, to an already talented group. Whether or not bypassing offensive tackle Penei Sewell was the right decision remains to be seen.

Meanwhile, the Vikings finished under .500 last year for the first time since 2014. But under head coach Mike Zimmer, the Vikings have never missed the playoffs in two consecutive years. To reach the postseason in 2021, however, Zimmer’s defense will have to be better.

The Vikings allowed 6.1 yards per play in 2020, the sixth-worst figure in the NFL. Of course, that led to having the fourth-worst scoring defense in the league, surrendering 29.7 points per game.

If Minnesota’s defense is not improved in 2021 despite the additions of Dalvin Tomlinson and Patrick Peterson (and the return of a healthy Danielle Hunter), then it won’t matter how many points Dalvin Cook, Justin Jefferson, and the Minnesota offense can score.

Despite being on the road in Week 1, the Vikings find themselves in a favorable matchup against a second-year quarterback who has admittedly been rusty in his return to the field. You should expect to see the Vikings put some points on the board and force Burrow to throw the ball 30+ times to keep up. That’s probably not ideal for the Cincinnati offense in Week 1.

How to watch Vikings vs. Bengals

Odds for Vikings vs. Bengals

The total feels low, and it’s fair to expect it to rise a bit between now and kickoff. The over is 4-1 in the last five games in which the Vikings are favored to win. On the flip side, the under has cashed in five of the last eight games the Bengals have played.