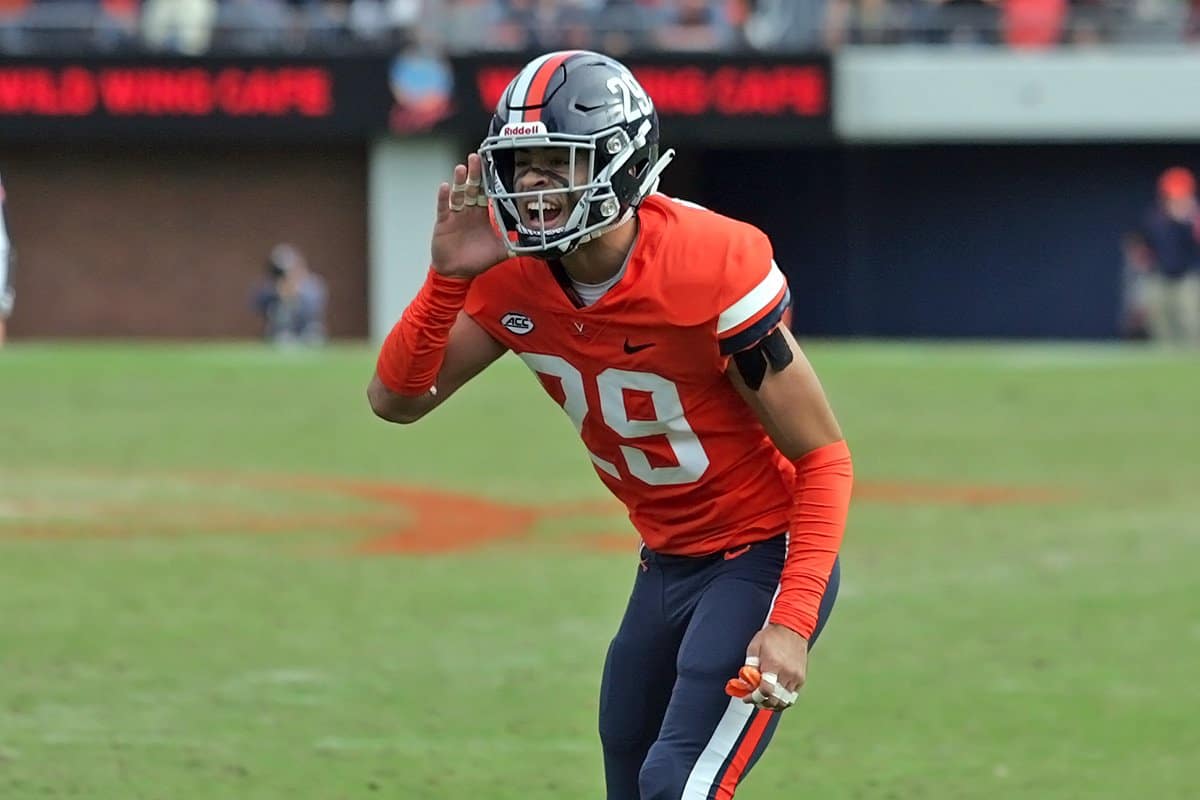 The ACC boasts a vast array of defensive playmakers poised for next-level success. While much of the conference talent consists of what many would consider household names, several prospects have gone overlooked throughout the evaluation process. The Virginia Cavaliers, who have now seen Quin Blanding, Juan Thornhill, Tim Harris, and Bryce Hall graduate to the professional ranks in recent years, have yet another defensive back in the pipeline. Joey Blount has gradually transitioned from key reserve to defensive centerpiece for UVA football over the past three seasons. If the gritty defender continues his ascension, his draft stock should continue to soar in the coming months.

Following a standout high school career at Landmark Christian (Atlanta, Georgia) in which he thrived as a two-way player, Joey Blount experienced a relatively smooth transition to the collegiate game.

Despite a talented Cavaliers secondary that featured the likes of Quin Blanding, Juan Thornhill, and Bryce Hall, Blount managed to find playing time as a freshman. Blount, one of 17 true freshmen to earn playing time for the Cavaliers in 2017, appeared in 13 games (one start). The lengthy defensive back yielded 34 tackles and a pass breakup in a prominent reserve role. Blount’s first career start came in place of an injured Juan Thornhill against the Pitt Panthers. He registered two tackles and a pass breakup from his cornerback spot in a blowout loss.

In addition to his defensive contributions, Blount’s fearless mentality and tackling prowess translated over to special teams, where he led the unit in tackles (15).

Although injuries proved to be a minor hindrance to Blount in his second season, it failed to disrupt his momentum. Blount attacked the offseason with a full head of steam, parlaying Quin Blanding’s departure into a prominent role on defense.

The 6-foot-1, 190-pound defender got off to a roaring start by reeling in his first career interception in the season-opener against Richmond. Still, Blount’s signature performance came in an early-season affair against Indiana. Playing on the road is never an easy task, especially for a young player, but Blount rose to the occasion. The Atlanta native turned in a brilliant performance, accounting for 13 tackles (1.0 for loss) and a pass breakup in a narrow loss to the Hoosiers.

In the Belk Bowl, Blount amassed four tackles (1.0 for loss), a pass breakup, and a forced fumble against South Carolina.

Following the departures of Thornhill and Tim Harris to the professional ranks, the onus fell on Blount and fellow defensive back Bryce Hall to carry the torch. However, Hall was lost for the season merely six weeks into the 2019 campaign. Blocking on a punt return, a Miami Hurricanes player awkwardly rolled his leg. After closer examination, it was determined that Hall suffered a broken fibula.

After years of Virginia boasting an embarrassment of riches in the secondary, ascending junior Joey Blount was the last man standing.

Blount served as a defensive centerpiece for the Cavaliers. The rangy defender compiled 95 tackles (6.5 for loss), 3.5 sacks, three passes defended, three interceptions, and a forced fumble over 14 games (11 starts).

Much like his sophomore season, Blount wasted little time making his presence felt. In the season-opener against a talented Pitt Panthers team, Blount notched seven tackles, an interception, and recorded his first two career sacks. He accumulated 16 tackles between the ACC Championship Game and the Orange Bowl and earned third-team All-ACC honors.

Among the most unheralded defensive backs in college football, Blount has evolved into a heady playmaker over the second half of his career after spending his early years toiling in a reserve capacity. One of the most versatile back-end players in the country, Blount is a fast-flowing force against the run and a bonafide ball-hawk in coverage.

However, what separates Blount from many of his counterparts is his innate instincts, ability to manipulate quarterbacks by disguising his coverages, and astute football intelligence. He broke into a crowded Cavaliers secondary as a freshman and continued to elevate his play over the past three seasons.

Early-season matchups against Georgia and Clemson will be critical in determining Blount’s draft stock. Still, his unwavering confidence and extensive resume suggest he will rise to the occasion once again.