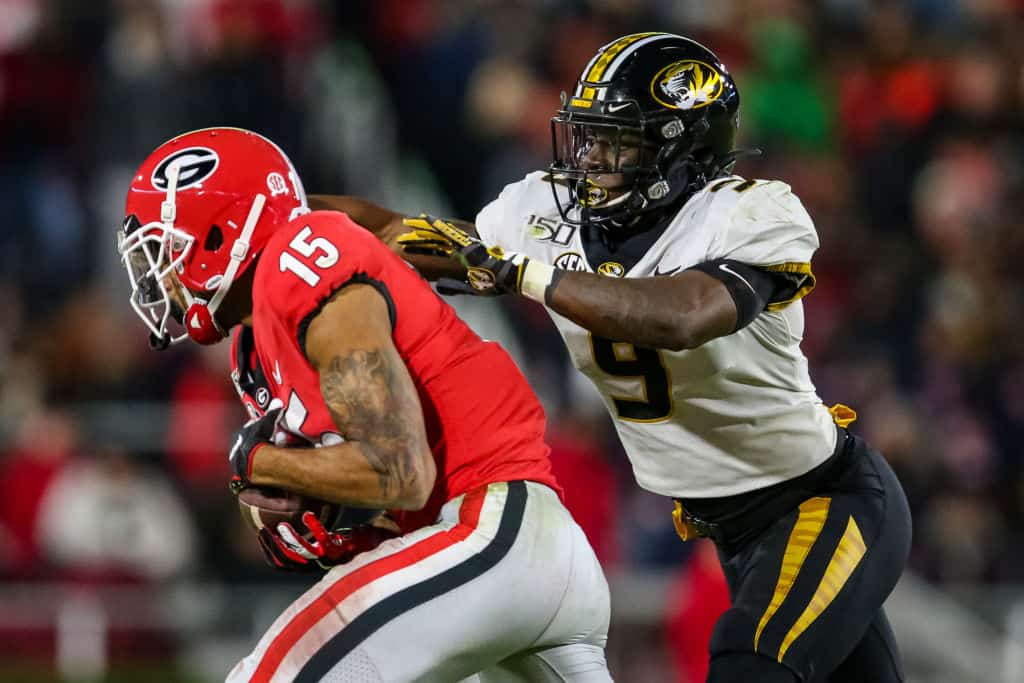 The safety position is one of the most versatile in football. The rangy, single-high terror is the most marketable archetype, but most safeties don’t fit that description. Every safety is different, and every safety provides value in different ways. How does Missouri safety Tyree Gillespie provide value, and what kind of upside does he provide as an NFL Draft prospect?

Positives: Nice-sized safety who flashes big-time ability. Keeps the action in front of him, tracks the pass in the air, and possesses a solid closing burst. Explosive, hard-hitting, and effectively times pass defenses. Quickly reads and diagnoses the action, fires upfield defending the run, and wraps up tackling.

Negatives: Often gets stuck in cement and struggles redirecting to ball handlers. Lacks great speed to the sidelines.

Analysis: Gillespie has flashed ability the past two seasons in both coverage and defending the run, and he displayed a lot of skill during Senior Bowl practices. He’s a developmental prospect who could make a roster as a ninth defensive back and special teams player.

Tyree Gillespie played at multiple positions in high school. Listed as an athlete, he logged snaps at running back and safety, and he also occasionally contributed as a returner. In his final season, Gillespie logged 40 tackles and two interceptions as a safety. As a running back, meanwhile, he produced 555 yards and seven touchdowns on the ground, with just 39 carries.

Gillespie didn’t have the volume or top-tier athleticism that other prospects had. Nevertheless, with his strong frame and 36-inch vertical, he drew some modest interest as a three-star prospect. Among other schools, Gillespie had offers from Iowa State, Indiana, Marshall, and New Mexico. Yet, Missouri presented Gillespie with an opportunity to both play in the SEC and see the field early. Gillespie couldn’t turn it down.

Gillespie’s energy on the field helped him avoid redshirting his true freshman campaign. Gillespie wasn’t yet a defensive contributor, but he managed to be a core special teamer for the Tigers early in his career. Gillespie carried that role into his second season, but he’d soon get his chance on the defensive side of the ball.

In October of 2018, Missouri’s starting free safety was benched, and Gillespie took hold of the starting job. From there, he maintained it for two and a half years, becoming one of the Tigers’ best defenders. In 2018, he managed to put up 48 tackles, 1.5 tackles for loss, and a sack, and in 2019, he took another leap.

As a true junior, Gillespie earned career-highs in almost every category. He put up 50 total tackles, 4.0 tackles for loss, and a sack, and he also amassed seven pass deflections in coverage. He carried over this impact into 2020. Despite playing just nine games in a season marred by uncertainty, Gillespie accumulated 46 tackles and four deflections.

Gillespie never earned All-SEC recognition, but on a Missouri team known for underachieving in football, Gillespie broke the mold. Now graduated, Gillespie aims to further distinguish himself in the 2021 NFL Draft. He also received an invitation to the Senior Bowl in January.

The 2021 NFL Draft safety class isn’t all too inspiring, but Tyree Gillespie redeems it a bit. The Missouri safety has decent size, but his aggressive style is what pops off the screen. Gillespie has a fairly quick trigger diverting course to the ball, and he can come downhill with a lot of momentum.

Gillespie has great short-area explosiveness, and in run defense, he generally takes good angles to the ball carrier. He’s able to swim through blockers on his way to the contact point, and once he reaches it, he has the density and physicality to dish out some big hits. The same can be said for Gillespie’s ability in coverage. Gillespie does a good job keeping his eyes on the quarterback. The Missouri safety closes in quickly on interior routes, and he has the force to knock balls loose.

Gillespie’s instincts also impress. In the box, the Missouri safety has a way of always being around the ball, and he has enough lateral quickness to sidestep blockers and stay engaged. In the deep third, he generally does a good job roaming and maintaining his positioning. He has more range than his speed implies, because of his burst and quick reaction times.

What are the concerns with Tyree Gillespie?

While Gillespie has good explosiveness and reaction quickness, he doesn’t always display his top speed. He ran a 4.43 at his pro day, but that number doesn’t always show up on tape. Especially in single-high, a position which Gillespie was asked to man quite a bit at Missouri, he doesn’t always possess the long speed to track deep threats across the field consistently. His redeeming traits also don’t adequately compensate in situations where he has to cover the length of the field.

Gillespie’s range concerns are mitigated somewhat in the box, where he doesn’t have to cover long distances to make a play. However, even in the box, Gillespie can be a bit inconsistent. At the contact point, he sometimes fails to wrap up and simply throws himself into the runner. This can cause underwhelming contact, or even whiffs on Gillespie’s part. When he does everything right, he can put up some impressive teeth-rattling tackles. However, he needs more consistency.

Additionally, Gillespie’s play strength isn’t the best. He’s not always able to impose his will at route stems, due to average strength and length. He needs to be consistently physical and disrupt receivers’ timing in man coverage because he doesn’t have the speed to stay in their hip pocket otherwise.

The verdict on Tyree Gillespie

Even though Gillespie is a good athlete with solid fluidity and explosiveness, his speed remains a question — and the derivation of his speed concerns — remains a question. His 4.43 40-yard dash time only compounds matters. If Gillespie is this fast, why didn’t it always show up on tape? Are there issues with reaction quickness to take into account? Can he play to his athletic ceiling more often?

Either way, in the NFL, Gillespie will need more consistency if he wants to be relied upon in single-high alignments. That’s not because of his instincts. That’s just because, at this moment, his combination of speed and reaction quickness might not be where it needs to be. Gillespie also doesn’t quite have the sheer length to make up for it at the catch point.

Having said that, it’s easy to be a fan of Gillespie’s game. He’s smart, he’s physical, and he’s incredibly aware. Plus, he has the short-range explosiveness you want for a box safety, as evidenced by his 35.5-inch vertical. When the field is smaller for him, Gillespie has the necessary range to make plays, and he has the awareness and quick reaction speed to stay around the ball.

One play against Georgia in 2019 encapsulated Gillespie’s skill set well. In the red zone with 7:43 left in the third quarter, Georgia ran a play-action fake that got most of the defense to bite. In the commotion, a tight end masquerading as a blocker started running to the end zone, finding open space quickly.

For a moment, it looked like the tight end faced no resistance. But Gillespie, who was near the line of scrimmage, had noticed the tight end breaking free from the group. Gillespie flipped his hips, turned upfield, and got there in time to deflect the pass, taking six points off the board for the Bulldogs.

Having the instincts to switch gears that quickly and convert on the play is impressive. That’s what Gillespie brings to the table.

Tyree Gillespie is an intriguing player. He’s not one of the best safeties in the class, and his range questions may limit his versatility at the NFL level. Still, there exists a role for him on the professional stage. Regardless of the questions surrounding his profile, Gillespie is physical, instinctive, and has good closing burst. I can think of a couple 2020 rookies who had similar — though not identical — profiles: Jordan Fuller and Kamren Curl.

Fuller and Curl are both bigger than the Missouri safety, but aside from that, they’re fairly similar archetypes. Both Fuller and Curl came into the NFL with concerns surrounding their range and athleticism. Yet, in niche roles that kept them near the box or in two-high, they were able to thrive with their short-area explosiveness and physicality.

So long as Gillespie doesn’t have to cover the expanse of the field, he can be a solid player in the right role. As a strong safety with utility against tight ends, he has starting potential. And if he can play to that 4.43 speed more consistently, he has potential beyond even that.

Having said that, I want to see more consistency from Gillespie as it pertains to the physical aspects of his game. His flashes are no doubt bright, but I’m not sure how his frame will translate to the NFL. Nevertheless, Gillespie’s foundation gives him some potential as a strong safety prototype, and in the middle rounds, he’s an exceptional pick. He could be a good fit for teams like the Cowboys, Raiders, Ravens, and Lions.

At the very least, Gillespie provides good depth and special teams ability with his experience in multiple alignments. However, Gillespie also has starting potential in a role that adequately attunes to his best traits. That’s what defense is all about these days — mixing and matching players to use them for what they do best.

Gillespie is a natural in the box, and he can also read the field in two-high looks and close in on in-breaking routes with tremendous anticipation. With a team that hones his specific abilities, he could potentially be a playmaker. He still has more to prove, however.