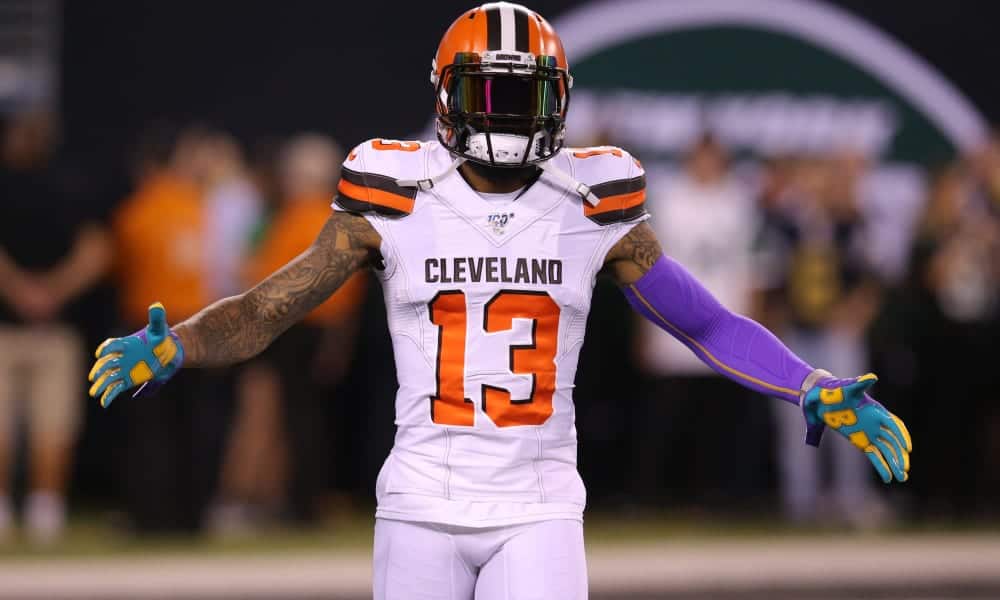 As preparation begins for the NFL GMs and scouts to make their draft picks virtually, the rumor wheel is spinning along. A move that is viewed as a game-changing deal might be smoke and mirrors, while other selections could have been the plan all along. Who’s to say which whispers are real and which will have your brain explode.

The 2020 NFL Draft is already going to be full of mayhem and madness before the Cincinnati Bengals start the countdown. With the ability to pause selections and use the clock in your favor, small technical difficulties could change social media and have people guessing what happened. Throw in the draft day trades of potential star talent, little sleep will be had come Thursday night.

The Two Minute Warning will be gearing up for the draft just like you, so let’s look at the burning ears and try to cool the fan bases before draft night.

Will Odell Beckham Jr. be traded on draft weekend?

This is one that didn’t come as a shock, but the team mentioned perhaps did. WFAN’s Marc Malusis reported the Browns and Vikings were in discussions about a deal that would send star receiver Odell Beckham Jr. to Minnesota for a second and fifth-round pick next year.

No first-rounder? Yeah, they debunked the rumor quick. According to ESPN’s Adam Schefter, both teams never discussed any deal of the sort. That, however, could be changing rather soon.

The #Vikings and #Browns are discussing a trade that will send star WR Odell Beckham Jr. to Minnesota for a a 2nd and 5th round picks next year, according to @MarcMalusis

The #Browns traded a 1st round pick, a 3rd round pick and Safety jabrill Peppers for Odell last season.

Beckham’s frustration vehemently grew throughout his first year in Cleveland. So much so, that a video of him telling San Francisco to “come get me” went viral down the stretch. Cleveland parted with a first-round pick to acquire one of the top wideouts in the NFL around this time last year. Understandably, it would make sense that the asking price be roughly the same this year. Perhaps this could be an opportunity for San Francisco to “get him” out of there.

Despite lacking in fantasy points, Beckham still had a productive year with Cleveland, finishing with 74 catches for 1,035 yards and four touchdowns. The 22nd ranked offense in 2019 has been improved in this offseason with the additions of Jack Conklin and Austin Hooper. However, Andrew Berry could be looking to move to a receiver who will have a lower cap hit and be less of a distraction over the next few years.

If a team is willing to offer a first for the veteran wideout, Cleveland very well might take it. In a loaded wide receiver class and their recent appraisal for Boise State’s Ezra Cleveland, the Browns could add a top-three receiver in the top-10 before grabbing their franchise left tackle. It’s strange to say the team is done with OBJ, but he certainly isn’t “off” any trade block.

When the Jets won Super Bowl III, Joe Namath became a household name in the NFL as well as the face of the organization. He might have been a humble boy from Pennsylvania, but Broadway Joe was already a star thanks to his time under Bear Bryant at Alabama.

If the Jets want to contend, adding another Bama boy could be the right move. Good news for them, three could be on the table when they pick.

A recent report from SNY’s Ralph Vacchiano stated that New York “loves” Alabama wide receiver Henry Ruggs III. They also have been a fan of his teammate Jerry Jeudy, who finished with back-to-back 1,000-yard seasons and 26 career touchdowns. However, the team has needs on the offensive line as well, leading some to believe offensive tackle Jedrick Wills Jr. could be the selection should he be on the board.

Ruggs has the speed that was lost when Robby Anderson departed this offseason. Additionally, he scored a serviceable 24 touchdowns over three years in an offense that had him playing a decoy role thanks to his vertical presence. An immediate upgrade over the now Carolina Panther, Ruggs would become a deep threat for Sam Darnold, stretching the field and giving the 30th ranked offense a chance to score.

Jedrick Wills did this pic.twitter.com/mya1PkZzE2

On the flip side, Jeudy is the more polished route-runner and has the size to go up against larger cornerbacks. His speed is adequate, while his ability to change direction would come in handy for an offense needing a viable lead target. However, if the Jets are looking to establish their offensive line, Wills should be their guy. Having played both tackle positions in college, the junior could be a multi-tool piece and even begin his career inside to help bolster the trenches.

One of these three names should be the pick. They don’t call Tuscaloosa “Title Town” without a reason. Expect another Bama product to be rocking gang green in 2020.

The biggest question surrounding the Dolphins right now is whether Tua Tagovailoa or Justin Herbert is their man. Not so fast, Fin fans, there’s another player that has piqued Chris Grier’s interest.

According to PFN’s Tony Pauline, the Dolphins have done their homework on Utah State’s Jordan Love this past offseason and have “liked him” for a while. The former Aggie regressed in his final year, but the tools, arm strength, and mechanics could have him geared up to become one of the top pocket-passers in the league by 2022.

If the Dolphins do love, well, Love, would they use the fifth overall selection on him? According to Pauline, it would “be shocking” to see it. Still, the need for offensive tackle is relevant, leading to perhaps Miami selecting Louisville’s Mekhi Becton in the top-five and taking Love later at the 18th pick.

From NFL Now on @nflnetwork earlier today on Jordan Love’s stock. I’m with @MoveTheSticks on this one. Could be into the latter part of the first round before we hear his name. pic.twitter.com/SzOOdAz1qQ

However, all of this could be smoke and mirrors to push down an offensive lineman. Since the beginning, the “Tank for Tua” trend has gone viral across the internet. By forcing teams to perhaps move up for “their guy”, the Dolphins could stand pat, grab their quarterback and see players they expected to be gone drop in their lap later.

There’s no reason to believe just days before the draft, Miami isn’t interested in a player they’ve liked for months. Until otherwise, Tua should be putting on sunblock. South Beach will burn you if you forget.