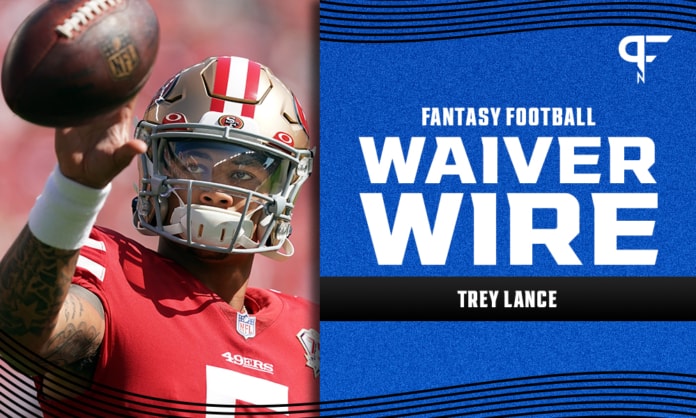 It's unclear if the 49ers rookie QB will make another start soon. But is Trey Lance worth a waiver wire addition in advance of Week 6?

On the field, Trey Lance’s first NFL start was up-and-down. In fantasy, it was hard to ignore how sizable his impact could be in the near future. The question is whether he can help fantasy football managers after the 49ers’ Week 6 bye. Should you pick up the rookie on the waiver wire?

How good is Jimmy Garoppolo and what does it mean for Trey Lance?

From a Super Bowl appearance to last place in their division, it was a tale of two seasons for the 49ers heading into 2021. Injuries took a huge toll last year, and Jimmy Garoppolo’s regression didn’t help — not that he was all that impressive in 2019. But when a high-priced acquisition looks no better than Nick Mullens and C.J. Beathard, it’s time to look elsewhere.

And that’s what San Francisco did, snagging the high-flying Lance with the third overall pick in the NFL Draft this past April. There is no questioning Lance’s inevitable rise. The question simply has been “When?”

That’s because Garoppolo has proven to be merely a capable quarterback — certainly not the offensive centerpiece the 49ers envisioned when they wrested him from the Patriots for a second-round pick before the 2017 season. Since then, Garoppolo has been more “capable” than “exceptional.” While in a Niner uniform, he’s thrown 51 touchdown passes and 28 interceptions on 1,001 attempts. Additionally, he has picked up a modest 104 rushing yards in 35 games.

The NFL is loaded with good quarterbacks. Few are great. Garoppolo is not at that high level, and it appears he never will be. This bears out in fantasy, where last year he averaged fewer points per game than Mullens. This year, he’s 27th in QB fantasy points per contest. Tied for last place in the brutal NFC West, the 2-3 49ers desperately need some wins if they are to have any shot at the postseason. Given his skill set, it would be shocking if Garoppolo started many more games.

Should you pick up Trey Lance off the waiver wire?

Lance’s 14.6 fantasy points in Arizona on Sunday were a good sign. He absorbed a barrage of pressure from the Cardinals’ defense while scampering for 89 yards on 16 carries. He threw poorly yet still racked up 192 yards on 29 attempts. This is a guy who’s barely played since his sophomore season at North Dakota State University in 2019. Nevertheless, he showed he belonged on the sport’s biggest stage.

It would not be surprising for San Francisco to go back to Garoppolo after the bye. He’s fundamentally sound. He’s safe.

But at some point, the team will need more — or else they’ll need to see what they have in Lance heading into next season. Either way, stash Lance if you can, especially in deep leagues. His fantasy playoff schedule (Weeks 15-17) includes tilts against the Falcons, Titans, and Texans. You don’t want to have to face Lance in the fantasy playoffs. So add him off waivers before one of your opponents does.