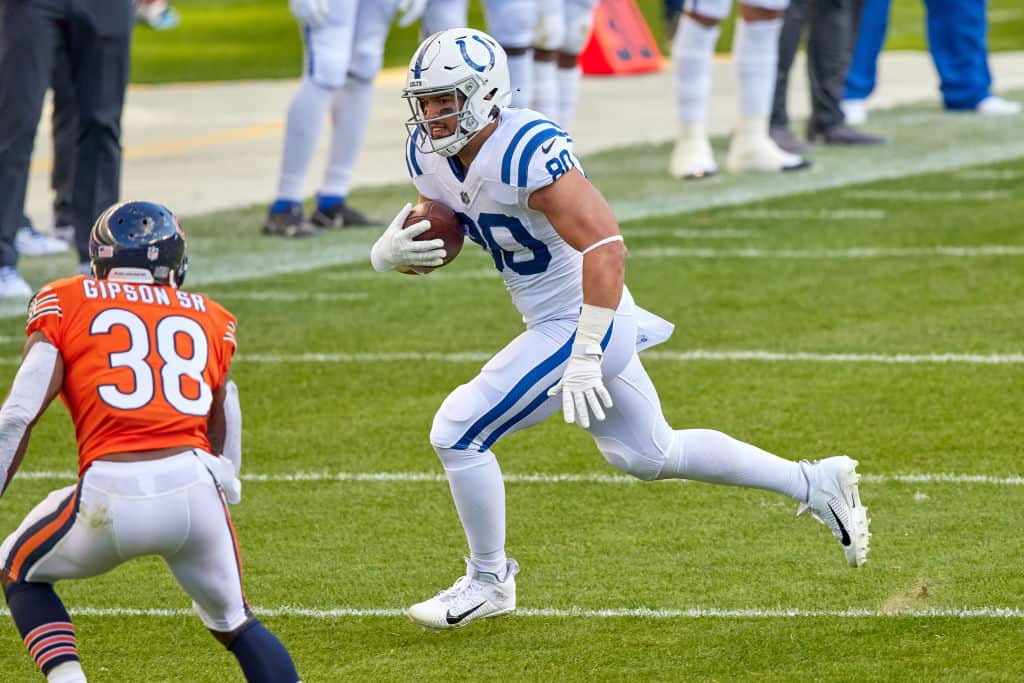 CHICAGO, IL - OCTOBER 04: Indianapolis Colts Tight End Trey Burton (80) runs with the football in game action during a NFL game between the Chicago Bears and the Indianapolis Colts on October 4th, 2020, at Soldier Field in Chicago, IL. (Photo by Robin Alam/Icon Sportswire via Getty Images)
What's in this article? Click to show
Trey Burton has been quietly active since his return to the lineup
Trey Burton gets a middle of the road matchup with the Bengals
Want more fantasy football news and analysis?

There are times in fantasy football where you might need to get creative when looking for players to start in your lineups. One such player who could see some sneaky value in Week 6 is Indianapolis Colts TE Trey Burton. With Mo Alie-Cox ruled out for the game, is Trey Burton worth a play in fantasy this week against the Cincinnati Bengals or is this a case of “getting too cute?”

There has been no denying that Mo Alie-Cox has been the undisputed TE1 for the Colts. Catching 11 of his 14 targets for 194 yards and two touchdowns, Alie-Cox got off to a hot start. However, in the last two weeks, he has slowed down. He had seen his targets drop to just three in both Week 4 and Week 5 combined, catching one for 13 yards and a touchdown. What led to this sudden drop in effectiveness? How about the addition of Trey Burton.

After missing the first three weeks of the season due to a nagging calf injury, Mo Alie-Cox had virtually no competition, which fantasy GMs loved. However, since making his debut in Week 4, Burton has been the player Philip Rivers has looked to the most.

In Week 4, Burton actually led the position in targets with five, catching two for 16 yards. This was overlooked by many fantasy GMs and analysts because Mo Alie-Cox was the one to fall into the endzone, which salvaged his day.

In Week 5, Burton caught five passes on six targets for 33 yards. While the six targets might not seem high, it was the second-highest on the entire offense. What is important to watch moving forward is that Burton has seen three targets in the red zone, including two in the endzone.

Over the past two weeks since his return, Burton has led the Colts tight ends in routes ran at 35, with Jack Doyle running 25, and Alie-Cox running just 13. Rivers is targeting the tight end on 21.3% of his attempts, and if Burton is going to be the primary recipient, he instantly gains value in fantasy moving forward.

Allowing 13.34 PPR points per game to opposing tight ends, the Bengals rank #12 in the NFL. However, they have gone against some really good tight ends at the same time. They’ve played against Mark Andrews, Hunter Henry, Zach Ertz, and Austin Hooper – all players who are routinely ranked in the fantasy top ten each week.

It worries me that Burton won’t see the volume to be a consistent play in Week 6. Even with Mo Alie-Cox out, there is still Doyle who will see his fair share of attempts thrown his way. Even if Burton sees 65% of the tight end targets, that is only 6.5 based on the ten per game average the Bengals are facing. Without getting into the endzone, it’s hard to see that being more than 30 yards.

Catching 69% of his passes for an average of seven yards per reception, we end up with a projection of four catches on six targets for 28 yards.

Even in PPR, where each reception gets a boost, that’s too low of a floor to trust. Sure, he could get into the endzone, but I have a hard time seeing Trey Burton being anything more than a shaky at best fantasy TE2 in Week 6. I think you can do better than starting Trey Burton in fantasy.