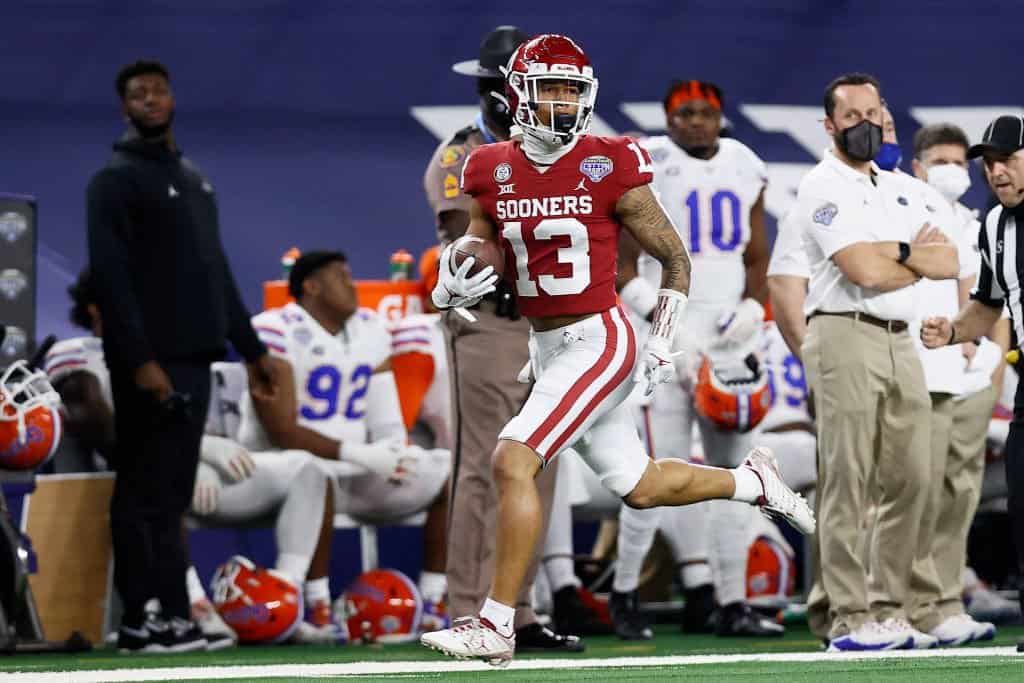 After tying for the second-most interceptions in the NCAA this past season, Oklahoma cornerback Tre Norwood has a tangible NFL Draft footprint. In a cornerback class that has suspect depth, he could be a riser late in the process. What does Norwood bring to the table? And does he have a chance to go early in the draft?

Positives: Athletic defensive back who lined up at corner and safety for Oklahoma. Plays heads-up football, keeps the action of front of him, and works to make plays. Quick-footed in reverse, smooth flipping his hips, and tracks the pass in the air. Displays a nice move to the ball and explodes out of his plant.

Negatives: Does not always play under control and overpursues the action. Easily knocked from his angle of attack. Not a sure-handed tackler.

Analysis: Norwood is a quick, competitive defensive back with size and strength limitations. He has the ability to line up in dime packages at the next level and would be best in a zone system or backed off the line of scrimmage.

There’s a strange dichotomy present in the Big 12. There’s a constant need for competence on the defensive side of the ball due to the conference’s offensive production. Yet, a relatively small percentage of defensive backs become legit NFL Draft prospects.

There’s great opportunity to be had. Especially with football modernizing and trending toward the pass. Tre Brown capitalized on that opportunity this season. Brown always had the tools to do so. That’s why he had a healthy interest as a recruit in the 2017 recruiting class.

Norwood was a three-star prospect, and he had a 35.5-inch vertical on his résumé. He would have been higher on the board, had he not weighed in at 167 pounds. Still, Norwood had offers from teams like Notre Dame, Louisville, and Tennessee. He also earned an offer from the Oklahoma Sooners, which he accepted.

Despite his three-star billing, Norwood’s college football career picked up relatively quickly. The Oklahoma cornerback played in 14 games in his true freshman season and wound up starting five of those contests. Along the way, he accumulated 30 total tackles and seven pass breakups, flashing his playmaking instincts early.

In 2018, Norwood returned as a key player on the Sooners’ defense. He started all 14 games, earning 58 total tackles, 2.0 tackles for loss, 1.0 sack, one interception, and five pass breakups. The Oklahoma Sooners DB rotated between cornerback and safety. He stood out in a secondary that otherwise allowed too much clearance to opposing players.

Norwood’s injury, and subsequent return in the 2020 season

Norwood was expected to expand upon his role in 2019. However, his path took a sudden turn close to the season. In the first week of camp in early August, Norwood tore his ACL in a non-contact incident. The injury sidelined him for 2019 and put his long-term future in question.

Norwood continued to persist and stayed diligent during his rehab. By December, he was jogging again. Through the ensuing offseason, he continued to grow closer to 100 percent. By August of 2020, Norwood was ready to go. He entered 2020 as Oklahoma’s best defensive back, and he only solidified his status.

In 2020, Norwood logged 23 tackles, five interceptions, and two deflections. He earned All-Big 12 honorable mention recognition in the process. He and Tre Brown formed a fierce tandem, but some of Norwood’s best work came in the slot. His pick-six on Kyle Trask also earned him national attention, as well as defensive MVP honors for the game.

After the season, Norwood officially declared for the 2021 NFL Draft. He also accepted an invite to the Reese’s Senior Bowl.

Norwood was tied for second in the NCAA in interceptions in 2020, and it wasn’t by accident. The Oklahoma cornerback has a number of traits that translate to solid ball production in coverage.

Norwood is a good athlete. He has solid hip fluidity, burst out of his breaks, and vertical explosiveness. His vertical athleticism might be his best quality. With his ability to rise and contort, Norwood has a large disruption window when covering receivers. He’s very proactive when it comes to seeking out the ball and very natural when coordinating his hands.

Additionally, Norwood also shows flashes with his ability to read plays. As evidenced by his pick-six in the Cotton Bowl, Norwood has the route recognition capacity and brisk closing speed to hawk on slower passes. Norwood’s combination of athleticism and ball skills gives him an exciting floor in coverage. His versatility provides an avenue for him to use that potential in different ways.

What are the potential issues with Tre Norwood?

In coverage, Norwood has a lot of NFL upside. However, his size and average length may limit him in other phases. For the time being, Norwood measures in comfortably under 200 pounds. We’ll have to wait to confirm at the Senior Bowl, but for the purposes of projection, Norwood’s size may limit his ability to help set the far edge in run defense. He also doesn’t have the play strength to muscle players down on a consistent basis.

Additionally, Norwood’s size may limit his consistency in press and in bouts with more physical wide receivers. Although Norwood uses his length to be proactive, he can afford to add more polish with his hands. Down the field, there are times where there is a fine line between proactive and irresponsible with hand usage. Lighter DBs also tend to over-compensate with their physicality, so Norwood will have to be careful on that front.

Tre Norwood undoubtedly ended his college career on a high note. However, some questions remain regarding his stock. He didn’t particularly stand out at the Senior Bowl, and his athletic testing numbers weren’t great — among them a 4.58 40-yard dash, a 33.5-inch vertical, and a 123-inch broad jump.

Going further, some of Norwood’s potential issues, such as how his slight frame will impact his translation to the NFL level, will have to be answered in action next September and onward.

With his playmaking ability alone, Norwood brings definite appeal. And at around 6-foot-0, 192 pounds, his size isn’t a trump card for his productivity. Additionally, Norwood’s experience on the boundary, in the slot, and at safety will be invaluable for his draft stock. Versatility in the secondary is more important than it’s ever been, and Norwood has the potential to be a chess piece with his wide-ranging experience and athleticism.

Which teams might desire Norwood in his projected range?

With that in mind, for our purposes, Norwood is a cornerback first. He played in the slot down the stretch at Oklahoma, and he profiles fairly well there. However, he also has the athletic traits and ball skills to produce on the outside and at safety.

In this cornerback class, Norwood is undoubtedly a player in the Day 3 range. For teams like the Dallas Cowboys, Las Vegas Raiders, Washington Football Team, and Denver Broncos, Norwood would be a good addition. He has high potential value in the mid-to-late rounds.

Even after his career season, Norwood’s draft stock still remains masked under subjectivity. The Oklahoma cornerback has undeniable talent, and he rebounded about as well as he could have from a major knee injury. Now, it’s time to use that opportunistic gene one more time, and start building buzz as April approaches.