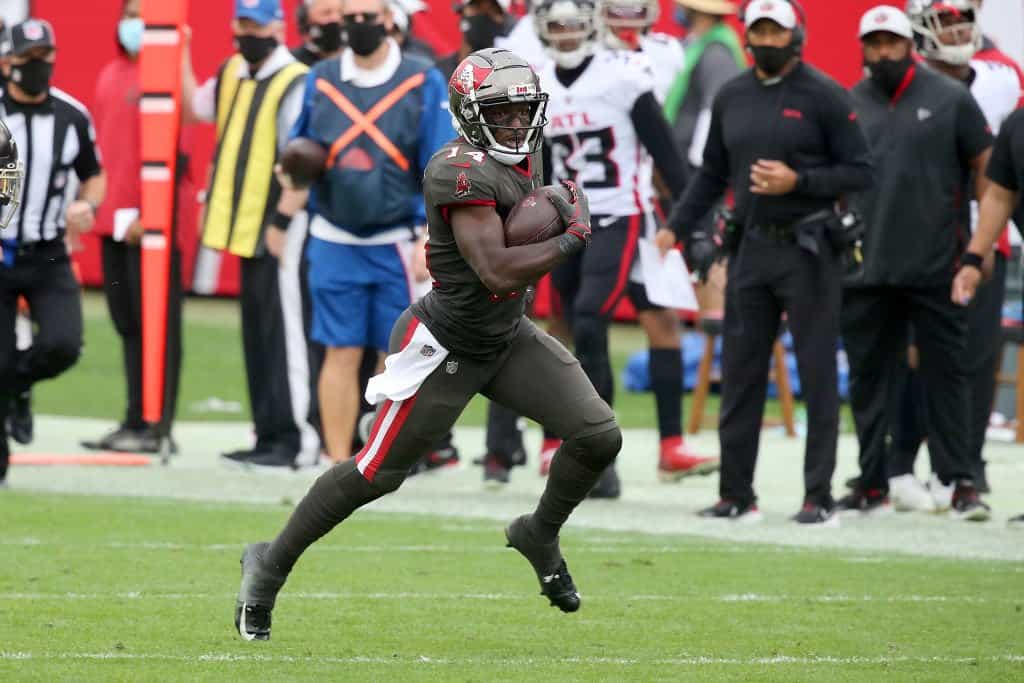 TAMPA, FL - JANUARY 03: Buccaneers receiver Chris Godwin (14) runs with the ball after making a catch during the regular season game between the Atlanta Falcons and the Tampa Bay Buccaneers on January 03, 2021 at Raymond James Stadium in Tampa, Florida. (Photo by Cliff Welch/Icon Sportswire via Getty Images)
What's in this article? Click to show
Buccaneers’ 2021 free agents — how much cap space does the team have?
The Buccaneers’ offense has multiple skill-position players set to hit free agency
The Buccaneers have three key defensive players from their front seven set to hit free agency
Who are the other Buccaneers’ 2021 free agents?

Entering the 2021 offseason, Tampa Bay will have their hands full as the Buccaneers 2021 free agent list includes 30 players who are set to hit the open market. As head coach Bruce Arians and general manager Jason Licht switch their focus towards the Buccaneers’ free agency, we’ll examine who their top free agents are this NFL offseason for offense and defense.

Buccaneers’ 2021 free agents — how much cap space does the team have?

With the projected salary cap expected to be set at $176 million — a decrease of 11.2 percent from 2020 — the Buccaneers still find themselves in good shape financially. According to Over the Cap, the Buccaneers are set to have $30.3 million in spending dollars for the 2021 free agency.

Tampa Bay’s offseason will start in mid-March at the beginning of the new league year, with them having the eight-most cap space in the NFL.

Leonard Fournette took on a different role in 2020. Fournette signed a one-year, “prove-it” deal with Tampa Bay shortly after being released by Jacksonville. With uncertainties to how he would adapt to Arians’ offense with several running backs already in place, Fournette still found the end zone six times while averaging 3.8 yards per carry.

LeSean McCoy struggled to accumulate touches in Tampa Bay this season, given the competitive backfield situation. McCoy only carried the ball 10 times and hauled in 15 receptions during the 2020 regular season.

His best days are well behind him, and he’ll hit the free agent market as he approaches his age 33 season. McCoy’s experience in the NFL can supply a team with young running backs a surplus of knowledge moving forward. However, the on-the-field production may be in the rearview mirror.

Chris Godwin’s 2020 campaign wasn’t the monster season he put up in 2019 when he recorded over 1,300 yards and eight touchdowns. However, his downtick in production wasn’t solely reliant on Godwin himself. The Buccaneers’ WR group is arguably the deepest unit in the NFL. With so many mouths to feed, something had to give.

Needless to say, Godwin was still a productive receiving option, totaling 840 yards and seven touchdowns on 84 grabs. Godwin is still young and talented, and the Buccaneers will almost assuredly have a plan to retain his services.

The résumé of Antonio Brown speaks for itself, statistically. However, his antics and off-the-field circumstances have hindered the interest from teams throughout the NFL. Ultimately, the Buccaneers rolled the dice on the four-time All-Pro, and he served as Tom Brady’s No. 3 wide receiver.

While Brown didn’t demonstrate the superstar talent he showed during his time in Pittsburgh, his relationship with Brady remains strong. With Brown and Godwin set to be pending free agents, the Buccaneers could be in a position to bring at least one of them back.

After retiring following the 2018 season, Rob Gronkowski felt the urge to play with one of the most decorated quarterbacks in NFL history once more. After time away from the game, Gronkowski returned and showed periodic glimpses of his normal self.

The four-time All-Pro tight end wasn’t the offense’s focal point like he was in New England. However, Gronkowski still offered his feisty approach catching passes and run blocking.

After a 2019 season in which Shaquil Barrett posted an NFL-leading 19.5 sacks, his play in 2020 regressed a bit. The Buccaneers were hesitant in giving Barrett a long-term deal as he was a product of playing on the franchise tag.

Just a year later, Barrett’s status in Tampa Bay remains unknown while he’s set to be a coveted pass rusher at the top of the free agent market. Barrett still managed eight sacks and 11 tackles for loss, which should treat him well in his pursuit to get paid this offseason.

Linebacker Lavonte David has been a staple in the middle of the Buccaneers’ defense over the last nine seasons. While he’s approaching his age 31 season, David has shown zero signs of slowing down.

The long-time Buccaneers LB has recorded 100 or more tackles in all but one season. With the production of David’s stature, his All-Pro recognition hasn’t quite developed since making the team in 2013.

The 2020 season saw Ndamukong Suh post his highest sack total (6) since 2015. Suh was a major contributor in the Buccaneers’ stout efforts of being the No. 1 ranked run defense. After spending two years in Tampa Bay, Suh could be seeking his final multi-year payday this offseason.

Who are the other Buccaneers’ 2021 free agents?

The Buccaneers’ other free agents served primarily as depth pieces. Backup quarterback Blaine Gabbert will depart Tampa Bay after only playing one time in Week 16. Center A.Q. Shipley retired after suffering a season-ending neck injury. Kick and punt returner Jaydon Mickens will become a free agent after serving as the Buccaneers’ deep man on special teams for the 2020 season.