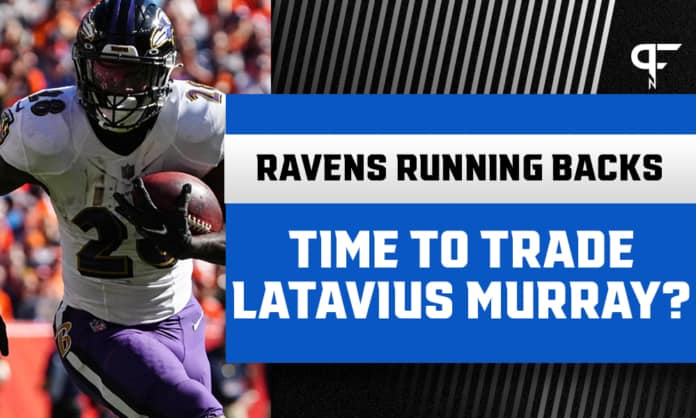 By BJ Rudell
October 11, 2021
What's in this article? Click to show
Four Ravens RBs to choose from
Ty’Son Williams
Latavius Murray
Le’Veon Bell and Devonta Freeman
Which Ravens RBs should you roster?

Heading into tonight’s contest against the Colts, the Ravens appear to have finally settled on a bell cow running back. Latavius Murray has scored in three of the last four games and appears poised (along with Lamar Jackson) to anchor Baltimore’s rushing attack. But Murray is not a long-term solution — and Ty’Son Williams, Le’Veon Bell, and Devonta Freeman clutter the matter. Here’s why you should sell high on one specific Ravens RB as soon as possible in your fantasy football leagues.

Four Ravens RBs to choose from

Which Ravens RB will have the most value in the committee? Do they all limit each other’s upside?

After season-ending injuries to J.K. Dobbins, Gus Edwards, and Justice Hill, 25-year-old Ty’Son Williams was the last man standing heading into Week 1. While the Ravens quickly signed three veterans, Williams led the team in the opening game with 12 touches for 94 yards and a touchdown. Murray ran 10 times for a measly 28 yards and a score. Williams appeared to be the lead back heading into Week 2.

But the coaching staff saw differently. Offensive coordinator Greg Roman explained that “We’re not going to put in one back and have him play the whole game. Those days are over.”

Savvy managers saw the writing on the wall, even as Williams impressed again with 93 yards on 15 touches in Week 2. He has since been phased out and was inactive last week. One theory is that Baltimore might be shopping him to RB-needy teams and don’t want to risk an injury. Regardless, while Williams might be the most talented runner in this backfield, the coaches clearly don’t see him as an ideal lead back — at least not now.

I traded Latavius Murray a couple days ago for Sony Michel. At the moment, it doesn’t seem like a good deal. Murray is the Ravens’ clear No. 1, while Michel is comfortably behind Darrell Henderson on the Rams’ depth chart. But I trust Murray to continue leading Baltimore’s rushers about as much as I trust Henderson remaining healthy.

Entering Week 5, the 31-year-old Murray was chugging along as an RB4, with a majority of his fantasy points coming off touchdowns. That’s not sustainable. Now, while we can’t simply remove TDs from the equation, we should ask ourselves what kind of fantasy contributor Murray would have been if he hadn’t yet found the end zone.

That’s why I traded him for Michel. And that’s why you should trade him before he’s worthless.

Bell saw his first action of the season last weekend: 4 rushes and 1 target. Devonta Freeman has averaged 2 touches per contest since joining the fray in Week 2. Both are post-prime, and neither seems capable of carrying the load. They are probably worse stashes than Williams, in that we know what they can do and it’s probably not on par with what Williams can do. Still, they could be a thorn in the side of Murray in the coming weeks, as Murray’s limitations remove him from a featured perch.

Which Ravens RBs should you roster?

If you thrive on TD dependency, stick with Murray for now. But you deserve better, and “better” means stashing Williams if you have bench space in the hope he gets back into Baltimore coaches’ good graces or gets traded to a team (Houston? Las Vegas?) that desperately needs a backfield shot in the arm. Otherwise, steer clear of this group and don’t look back.