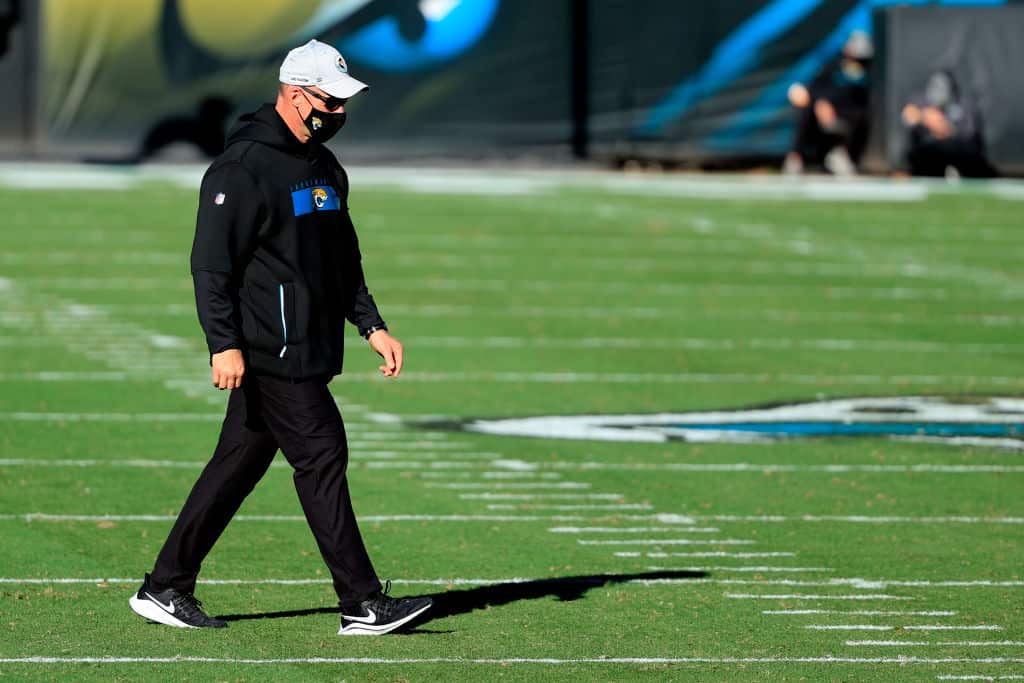 Doug Marrone has officially been fired by the Jacksonville Jaguars after finishing 1-15 in 2020. As such, the focus now turns to the Jaguars head coach candidates. While the Jaguars don’t have a general manager yet, there are some expectations that the head coach will pick his own GM.

Why was Doug Marrone fired?

Doug Marrone led the Jaguars to the AFC title game in 2017, but the team fell apart in the following years. Marrone compiled a 23-43 record in his five years in Jacksonville. The Jaguars officially clinched the #1 overall pick in the 2021 NFL Draft. Two weeks later, Doug Marrone was fired.

Jacksonville is an appealing job for many coaches

The Jacksonville Jaguars job will be appealing to many head coach candidates. Other than the fantastic weather, the team has plenty of intrigue. They are currently armed with 11 draft picks in the 2021 NFL Draft, including the #1 overall pick and another first-round pick.

The team will have an estimated cap space of $96.9M, giving them plenty of opportunity in the free-agent market. More importantly, the team will end up with one of the best quarterback prospects in recent memory in Trevor Lawrence.

Here are the top names for the Jaguars head coaching candidates.

Meyer has become the hot name for the Jacksonville Jaguars head coaching job. He’s reportedly been assembling a staff, expecting to be hired in Jacksonville. Meyer is best known for his collegiate tenure, winning multiple NCAA championships with the Florida Gators and Ohio State Buckeyes.

The intriguing part of Meyer isn’t necessarily his schematic genius, but rather his ability to be a CEO type of head coach. Urban Meyer had numerous successful assistants at the NFL level and has developed quite a coaching tree. His connections into the coaching world and the appeal of the Jaguars’ job could bring in some quality assistant coaches to his staff.

Robert Saleh has done an outstanding job this season as the defensive coordinator for the Niners. Despite the number of injuries the 49ers have sustained, they are sixth in Defensive DVOA. Saleh has been a hot name for a few jobs so far, including the Detroit Lions and Atlanta Falcons.

Saleh worked for the Jaguars from 2014-2016. The Detroit Lions are strongly pursuing Saleh. However, the Jaguars are an incredibly appealing job for any coach. With the opportunity to forge the team’s identity with the amount of draft capital and cap space, Saleh could bypass a long rebuild in Detroit or Atlanta for Jacksonville.

Hackett is a young candidate who is viewed as “energy bringing” and he plays a big role in the Packers’ offensive identity despite not calling the plays. The son of Paul Hackett, Nathaniel Hackett has been around football his whole life.

The Packers are first in offensive DVOA this season. Aaron Rodgers has had a career resurgence this season and looks to win the MVP this season. While Head Coach Matt LaFleur is the one calling plays, Hackett is viewed as an integral part of the Packers’ offense. The Packers’ coaches and players rave about his IQ and energy as a coach, even going so far as to quote Hackett’s favorite movie, Goldfinger, often.

While fans might be upset or concerned about hiring a coach who was an integral part of Marrone’s staff for years, Hackett has spent a couple of years developing his own identity with the Packers. Combining his own knowledge with Matt Lafleur’s will be intriguing. If he can bring the Packers’ offensive success with him, he’ll be a great head coach candidate for the Jaguars.

Be sure to stay up to date with all the latest news from around the NFL with our Black Monday Tracker. Additionally, be sure to check our head coaching profiles and potential head coaching candidate articles.

On Sunday, Adam Gase was the first head coach to be fired following the conclusion of the 2020 NFL season. The New York Jets joined the Detroit Lions, Atlanta Falcons, Houston Texans in looking for a new head coach. With the firing of Marrone, the Jaguars now also add their name to that list.

In addition to teams looking for head coaches, a number of teams are also looking to fill general manager roles. The Jacksonville Jaguars fired Dave Caldwell earlier in the season. They, along with the Lions, Texans, Falcons, Panthers, and Washington are all looking to hire a new general manager in the coming days and weeks.