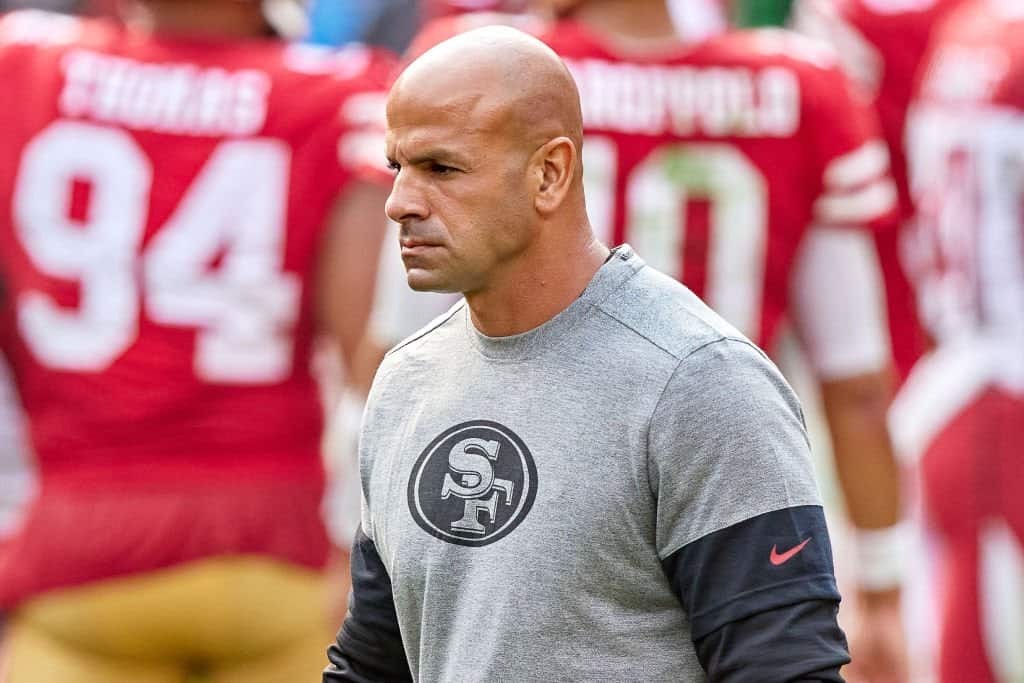 One of the most sought after head coaching candidates of this hiring cycle is now off the market. The New York Jets announced on Thursday night they have reached an agreement with San Francisco 49ers defensive coordinator Robert Saleh to be their next head coach. PFN’s NFL Insider Benjamin Allbright reported strong interest by the Jets in Saleh on Tuesday, including what his hiring might mean for quarterback Sam Darnold.

So what does Robert Saleh bring to Florham Park as the new Jets head coach?

There was a time when Saleh wasn’t one of the most popular assistant coaches in the NFL. He started his coaching career as a complete unknown, as many do. After graduating from Northern Michigan University, Saleh got a job as a defensive assistant at Michigan State University in 2002. After two years, he took on the same job at Central Michigan University. By 2005, his work earned him an opportunity at the esteemed University of Georgia.

Later in that same year, the Houston Texans recognized Saleh’s potential and made him a defensive intern. Saleh then began his long journey up the NFL ladder. He remained with the Texans until 2010 when the Seattle Seahawks brought him on as a defensive quality control coach. He helped the Seahawks maximize their defensive performance in the “Legion of Boom” era, capitalizing on his stint with a Super Bowl victory in 2013.

Saleh’s success in Seattle led him to his next step up the ladder, the Jacksonville Jaguars, as their linebackers coach. Saleh manned that position from 2014 to 2016. By the end of that stretch, Saleh’s linebacker unit was one of the better groups in the league, boasting the talents of players like Myles Jack, Telvin Smith, and Paul Posluszny.

By now, many teams had become privy to Saleh’s work. In 2017, he reached the highest echelon of the defensive hierarchy, taking the position of defensive coordinator for the San Francisco 49ers. He’s been there for four years, and along the way, he’s only proven that he can keep rising.

Saleh has been the defensive coordinator of the San Francisco 49ers from 2017 to 2020. He’s turned the 49ers’ defense into one of the best resistance units in the league through that time period.

In 2016, before Saleh’s arrival, the 49ers’ defense distinguished itself in a different way: coming in dead last in the NFL in average yards allowed per game. They were the only team in the league to allow over 400 total yards per game on average, and they were also the only defense in the NFL to allow over 30 points per game.

Saleh provided an immediate boost in his debut season with San Francisco. In 2017, his defense ranked 24th in the NFL in total yards allowed per game, eight spots higher than the previous year. It also saw a massive decrease in points allowed per game, from 30.0 to 23.9. Saleh’s growth continued in 2018, but things didn’t truly come together until 2019. In that season, Saleh once again helped his team reach the Super Bowl.

The San Francisco 49ers went 13-3 in 2019, winning the NFC West and the NFC Championship. A big reason for their success was the coalescence of Saleh’s defensive vision. With standouts such as Nick Bosa, DeForest Buckner, Fred Warner, and Richard Sherman, Saleh’s defense thrived, earning a mark as the second-best defense in terms of total yardage. They also allowed the eighth-least points per game in the NFL.

Diving further into the details, the performance of Saleh’s 2019 defense only becomes more impressive. The 49ers generated pressure at the second-highest rate in the NFL in 2019. They also logged the second-most sacks, coming just behind the Pittsburgh Steelers. The turnover department also proved lucrative for Saleh’s squad, as they logged 27 total turnovers, the sixth-highest figure in the league, and a seven-turnover increase from the 2016 season.

Despite a slew of injuries in 2020, Robert Saleh has kept the 49ers’ defense more than respectable. Despite losing players such as Buckner, Bosa, Dee Ford, Kwon Alexander, and Solomon Thomas, either to injury or departure, and losing Richard Sherman for most of the season, Saleh has kept the 49ers’ defense near the league middle statistically. He also draws exceptional play from his unit against short passing offenses.

Even more impressive than Saleh’s quantifiable improvement of the 49ers’ defense is the impression he’s left as a leader. Saleh is widely regarded as a strong leader of men — an archetype frequently sought out when considering defensive coaches. Veteran cornerback Richard Sherman, who’s been around successful defensive head coaches before, said exactly that about Saleh when talking about his defensive coordinator on November 29.

The strengths of Robert Saleh’s resume

There’s a reason his name has been circulating for weeks as a head coaching candidate.

Everywhere he goes, Robert Saleh helps enable defensive improvement and catalyzes success on that side of the ball. Beyond that, he’s also shown an ability to be flexible and change up his approach when things aren’t working or when injuries strain personnel versatility. That adaptability is priceless for a head coach.

Watching games, you can see the fire Saleh brings on the sidelines. His personality resonates well with his players; it’s not grating, as it can be for other coaches. Players are fired up by Saleh’s energy and passion for the game. As a head coach, his impact there could be magnified.

Saleh has a long history of coaching defensive players up, in addition to generating schematic success. In San Francisco, beyond the obvious names like Warner and Bosa, he’s helped lesser-known players like Emmanuel Moseley, Dre Greenlaw, and Kerry Hyder produce.

Robert Saleh as a head coach

There is some uncertainty with Robert Saleh, as there is with all first-time head coaches. But in terms of what teams like to see from defensive candidates, Saleh checks several boxes. He’s a smart, versatile defensive mind who has a proven track record of success. Additionally, his traits as a leader will be invaluable in a head coaching role, where culture creation is key.