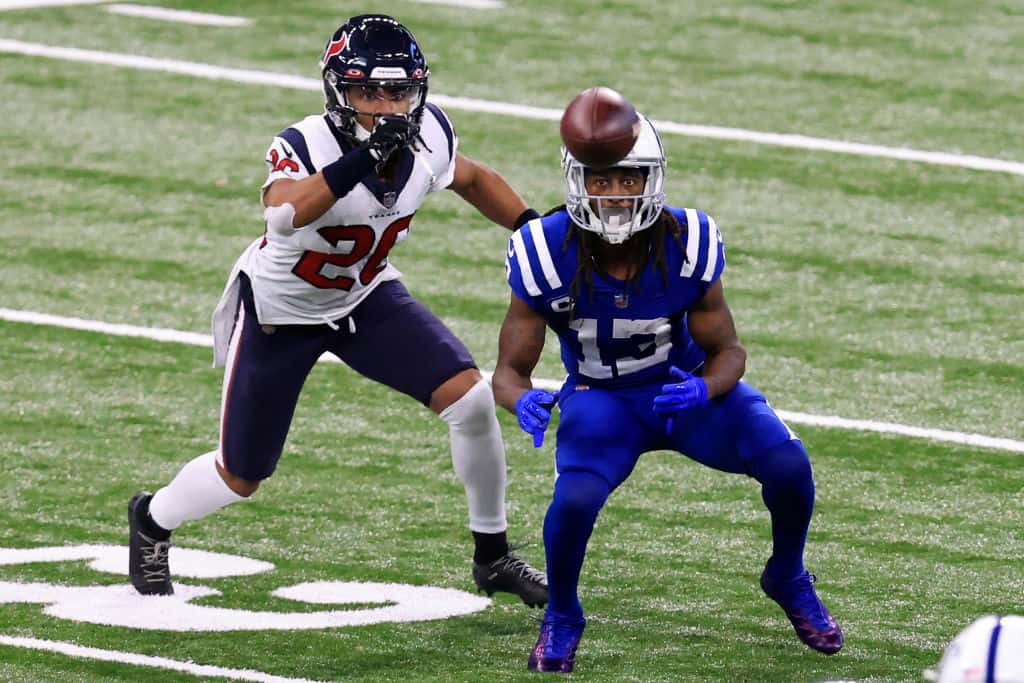 INDIANAPOLIS, INDIANA - DECEMBER 20: T.Y. Hilton #13 of the Indianapolis Colts attempts to catch a pass while being defended by Justin Reid #20 of the Houston Texans during the fourth quarter at Lucas Oil Stadium on December 20, 2020 in Indianapolis, Indiana. (Photo by Justin Casterline/Getty Images)
What's in this article? Click to show
The Colts will be large players in free agency in 2021
Following Anthony Castonzo and Philip Rivers’ retirement, the Colts will assuredly be players in the OL and QB market.
Indianapolis Colts’ 2021 offensive free agents
Indianapolis Colts’ 2021 defensive and special teams free agents
Want more NFL news and analysis?

After an 11-5 2021 season that landed the Indianapolis Colts in the NFL‘s Wild Card Weekend, they head into free agency with 22 (16 UFA) players who will be free agents. One looming question over the Colts is how will they upgrade the offensive line, and who will play quarterback for the team next season?

The Colts will be large players in free agency in 2021

If you were to make a list of the best general managers in recent years, Colts’ GM Greg Ballard could be at the top of the list. Not only has he helped get the Colts into contention in the post-Grigson era, but he has also been one of the best drafters in the NFL, as well as balancing the cap.

Due to this, the Colts are a team that can compete and has the salary cap to make large moves in this upcoming offseason. According to Over the Cap, the Colts have an estimated cap space of $65.13 million, the third-highest in the NFL. Where most teams will face cap constraints due to the cap’s reduction of roughly $22.8 million, Indianapolis is in the market to be large players in free agency in 2021.

Following Anthony Castonzo and Philip Rivers’ retirement, the Colts will assuredly be players in the OL and QB market.

On a one-year, $25 million deal for one last shot at the elusive title, Philip Rivers came to Indianapolis. Unfortunately, that journey came up short, and Rivers announced his retirement on January 20th. His next stop will be on the sidelines as the St. Michael Catholic High School football team’s head coach in Fairhope, Alabama.

Related | 5 quarterbacks that could replace Philip Rivers in Indianapolis

Rivers was an upgrade over the ultra-conservative Jacoby Brissett, but even he is a free agent in 2021. As for a solution on the roster, the Colts would turn to 2020 rookie Jacob Eason. It’s hard to tell if a season on the bench learning the game has the former Washington Huskies QB ready for the NFL.

The name everyone will throw around is a reunion with Carson Wentz and head coach Frank Reich though I don’t believe this will happen. The Eagles decided to move forward with Wentz when they fired Doug Pederson. Taking on that contract is not a move that fits Ballard’s motives.

With the sudden but not surprising retirement of Anthony Castonzo, a franchise left tackle just jumped up the list of needs Indianapolis must address this offseason.

Left tackle is a position that hardly gets to free agency — especially top-end talent. The Colts and their fans know as well as anyone how important it is to protect a QB and what could happen if they are hit all the time (see: Luck, Andrew). There are a few that could interest Indianapolis if they choose to get a short-term answer right now. Trent Williams and Jason Peters are names in free agency to watch.

Drafting a left tackle seems to be the likely answer. It is a deep tackle draft, with Alijah Vera-Tucker, Samuel Cosmi, Liam Eichenberg, Jalen Mayfield, Alex Leatherwood, and many more that could be in range when the Colts pick at 21 and again at 54.

The Colts are likely to let WR T.Y. Hilton walk as a free agent in 2021

Some players need to be looked at with the head rather than the heart. T.Y. Hilton, who has been a fixture of the Colts’ offense, won’t be back in 2021. Hilton manages to put together a solid back half of the season but is past his prime and could be an expensive contract for a 31-year-old WR.

According to Spotrac, Hilton carries an estimated $10 million market value per season on a three-year, $30 million contract. It would need to be front-loaded as well, given the likelihood Hilton could retire before it runs its course. If the Colts are going to spend up, why not spend that money on one of the elite options in this free agent class?

I can see anyone of Allen Robinson, JuJu Smith-Schuster, or Chris Godwin in Indianapolis. Even going a tier down for Corey Davis and Curtis Samiel could fit, though the Colts will look for an alpha to fill the WR1 role on the offense.

It seemed as if fate was against Marlon Mack, who was in a contract year with the Colts. If not for a torn Achilles in the second week, it’s hard to tell how good of a season he could have had. However, there was no way he could have held off former Wisconsin Badgers RB Jonathan Taylor, the best rookie running back of the season.

Mack deserves to be either a starter or in a 1A-1B committee approach. Despite the devastating injury, Mack is just one season removed from 1,091 rushing yards and 8 touchdowns of production with the Colts during 2019.

There is a chance Mack comes back on a one-year “prove-it” deal to show he is fully healed from the injury and use it to get a larger contract in 2022 once the salary cap vaults back up.