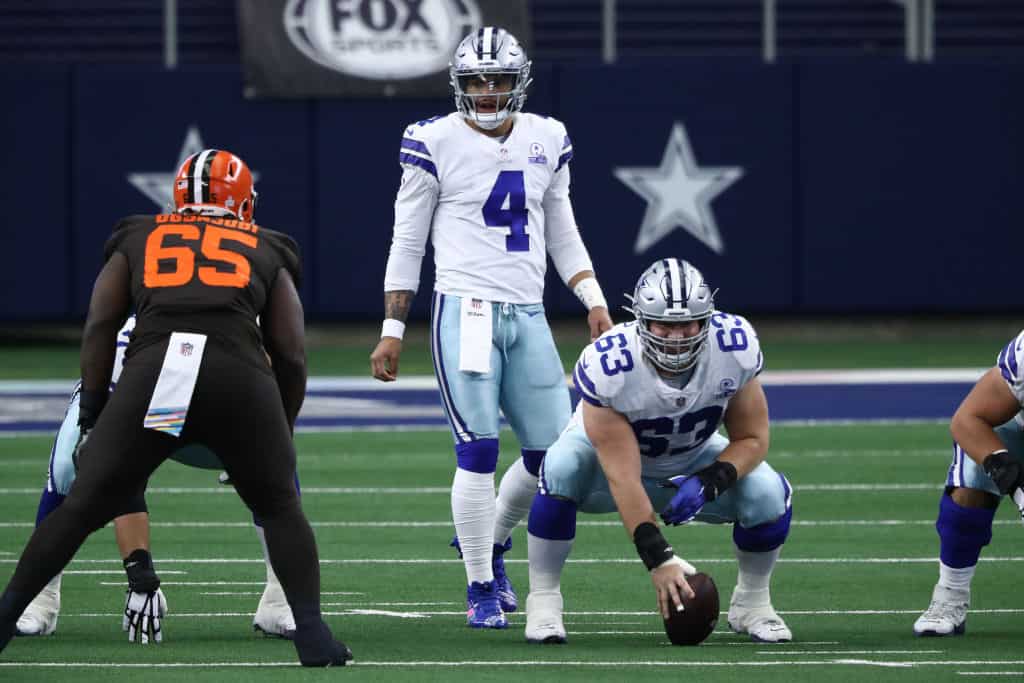 ARLINGTON, TEXAS - OCTOBER 04: Dak Prescott #4 of the Dallas Cowboys walks off the field at AT&T Stadium on October 04, 2020 in Arlington, Texas. (Photo by Ronald Martinez/Getty Images)
What's in this article? Click to show
Could Nick Mullens get attention as a Restricted Free Agent in 2021?
Which quarterbacks rank 5-10 in the 2021 free agent class?
Will any team be willing to take a chance on three former first-round QBs in 2021?
One name stands clear as the potential best free agent quarterback option in 2021

After a 2020 offseason that saw several high-quality quarterbacks available, how does the 2021 free agent class shape up? Which QBs are set to be free agents in 2021, and how do they rank?

Could Nick Mullens get attention as a Restricted Free Agent in 2021?

With just two accrued seasons in his time in the NFL, Nick Mullens enters the 2021 offseason as a restricted free agent. The San Francisco 49ers will have an opportunity to make a “qualifying” offer to Mullens. Mullens will then be able to negotiate freely. If he accepts an offer sheet from another team, the 49ers would have the right of first refusal on matching that offer. If the 49ers do not match, they will receive compensation in the form of a draft pick or picks.

Yet, it seems unlikely Mullens will be high on anyone’s list this offseason. The 25-year-old QB has 12 touchdowns and 12 interceptions on the season. However, he will miss the remainder of the year with an elbow injury. If healthy, Mullens could have garnered a small amount of attention, but it seems most likely he will end up a free agent who has to prove his health during the offseason.

The lower end of the 2021 NFL free agent quarterback class lacks star power. However, could these five all be serviceable backups in 2021?

Any hope Newton had of reviving his career with a successful stint in New England has passed. In the 2020 season, he has just five passing touchdowns and 10 interceptions. He has also added six fumbles while also being replaced by Jarrett Stidham during games.

Newton’s most likely situation is that he is offered a veteran minimum backup role on a roster that runs a similar offense to the style he ran early in his career.

Tyrod Taylor’s shot at a career redemption was derailed by the Chargers medical team’s unfortunate incident. The 31-year-old QB did little to impress in his one game as a starter. If he is not back in Los Angeles as the backup to Justin Herbert, chances are he lands on another roster as the veteran backup to a young QB.

His relationship with the Chargers appears to be intact, so it seems likely he remains in Los Angeles, especially as there is unlikely to be much demand for his services as a starter in 2021.

Jacoby Brissett proved in 2019 that he was a capable emergency QB after Andrew Luck retired. Brissett threw for 18 touchdowns with just six interceptions as the Colts went 7-9. He also added 228 yards on the ground as well as four touchdowns.

While Brissett is unlikely to be in high demand as a starter, he presents a solid pair of hands to guide a team when a starter gets injured. His services as a backup could have a market, assuming the Colts do not look to re-sign him themselves.

It has been an up and down season for Dalton as a starter. Moreover, playing behind a poor Cowboys offensive line, Dalton has gone 4-4 and kept the Cowboys in the NFC East race right up until the end of the season. Two fourth-quarter comebacks and three game-winning drives say a lot about the level Dalton can still offer.

While not the exciting option many fans will want, Dalton provides a backup option that can take even a mediocre team to a .500 record. That is a valuable trait when it comes to free agent QBs. His services should be in high demand this offseason.

One of the more fascinating potential free agents QBs. Fitzpatrick has been his usual entertaining self in 2020. Thirteen touchdowns and eight interceptions while leading the Dolphins to a 4-3 record do not tell the full story. The Dolphins have turned to Fitzpatrick in pressure moments to be the risk-taker under center. As a 16-year veteran, the journeyman QB is a player many teams will be interested in.

A telling aspect about Fitzpatrick and his leadership will be the interest the Dolphins show in keeping him. If they fight hard to keep him on the roster, it speaks wonders to what he brings to this team and their rookie QB. If they allow him to walk, he will be a highly sought after part of the 2021 quarterback free-agent class.

Will any team be willing to take a chance on three former first-round QBs in 2021?

There is no shortage of quarterbacks with high pedigrees among the 2021 free agents. All three of these potential free agent QBs were selected in the top half of the first round in the past six years.

Washington released Haskins following their Week 16 loss to the Carolina Panthers. He may not even make it to traditional free agency if a team decides to take a chance on him heading into the offseason. While his leadership and decision making have been questioned, this is still a player that was considered a first-round talent. That will carry weight with some teams, who may feel the talent level is worth the risk of signing Haskins.

It may be concerning to teams that Jameis Winston was not the first QB the Saints turned to after Drew Brees got injured. However, the circumstances are somewhat extraordinary. Winston is, to some extent, a known quantity, while Taysom Hill is not. The Saints needed to see what they had in Hill, and it should not count against Winston.

There is no doubt that serious question marks remain around Winston’s decision making. 88 interceptions in 75 games highlight that perfectly. However, Winston also threw for over 5,000 yards with 33 touchdowns in his final season as a starter. If the Saints decide Winston is not their backup in 2021, expect someone else to consider him an interesting piece regarding the 2021 free-agent quarterbacks.

The last four games have seen Trubisky re-invigorate his career somewhat. A 68% or higher completion rate with seven touchdowns and two interceptions will do that for a quarterback.

Whether he remains in Chicago depends largely upon Ryan Pace and Matt Nagy’s future, but if he is released, there will be teams interested in seeing what he has. He may not start, but a quarterback drafted second overall in the last five years is likely to be a free agent teams consider carefully in the 2021 offseason.

It seems a long time ago that Dak Prescott was carted off the field in Week 5. In his first four games, Prescott threw for 1,690 yards with nine touchdowns and three interceptions. Prescott was on pace to throw for over 6,000 yards with 36 touchdowns following the first quarter of the season. While that pace would have likely slowed down, it does demonstrate just how high his potential is.

Prescott was playing on the franchise tag in 2020. That tag was worth $31 million and will rise to $37 million if the Cowboys tag him again in 2021. Despite his injury, Prescott will likely be asking for a huge deal — perhaps one of the highest ever among free agent QBs. He is by far the best quarterback of the 2021 free agent class. If he hits the open market, there should be many interested suitors.