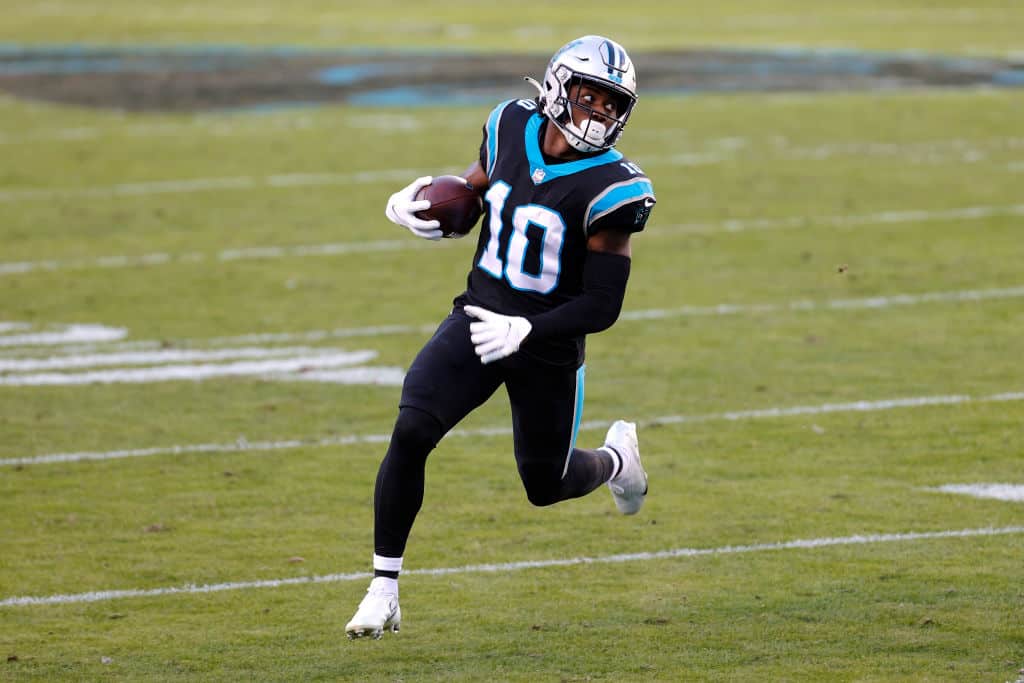 CHARLOTTE, NORTH CAROLINA - DECEMBER 13: Curtis Samuel #10 of the Carolina Panthers carries the ball during the fourth quarter of their game against the Denver Broncos at Bank of America Stadium on December 13, 2020 in Charlotte, North Carolina. (Photo by Jared C. Tilton/Getty Images)
What's in this article? Click to show
The 2021 offseason will be critical for the Panthers if they look to make headway in the NFC South
The Panthers have to make decisions on several of their potential 2021 free agents
Carolina Panthers’ 2021 offensive free agents
Carolina Panthers’ 2021 defensive and special teams free agents
Want more NFL news and analysis?

After three consecutive losing seasons, the Carolina Panthers head into the 2021 NFL‘s free agency period with several positions that need addressing. Before they can attack arguably the most significant offseason in the team’s history, the Panthers must address the numerous players on their roster who will be free agents once the 2021 season kicks off in March.

I don’t think anyone realistically thought the Carolina Panthers would be players in the NFC South. Among the three other teams, the Panthers are on the bottom looking up. However, that is a script that could soon flip on its head, as massive changes are on the division’s horizon.

The shifting tides of the NFC South

Matt Ryan could be in his final season with the Falcons. Drew Brees could very well retire this offseason. And Tom Brady has only the 2021 season remaining on his contract with Tampa Bay.

If the Panthers make the right moves, they can be poised to capitalize on the turmoil that will fall on the other teams. Whether it is 2022 or 2023, the Panthers could be sitting on top of this division.

Head coach Matt Rhule and offensive coordinator Joe Brady helped to inject new life into the offense. However, we have to watch for Brady to leave and become a head coach. He was already in meeting rooms for several coaching vacancies around the NFL.

They have an up and coming defense after spending every 2020 NFL Draft pick on the unit, including potential Defensive Rookie of the Year Jeremy Chinn. Carolina has the best running back in the NFL in Christian McCaffrey — the Panthers are a QB away from competing week in and week out.

How much cap space do the Carolina Panthers have in 2021?

According to Over the Cap, the Carolina Panthers come into the 2021 free agency period with $7.132 million on cap space.

This offseason will be an interesting one for new Panthers general manager Scott Fitterer. While he looks to make his mark on the team, he is hamstrung due to the salary cap reduction.

By playing most of the games without fans, the revenue took a massive hit due to no money coming in the gates every Sunday. Current estimations have the salary cap at $176 million, down $22.2 million from the previous season. The NFL and NFLPA agreed to a salary cap floor of $175 million.

The 2020 offseason was dominated by the massive trade of DeAndre Hopkins to the Arizona Cardinals in what was arguably the worst trade imaginable. Well, there was a second one that was nearly as bad that no one mentions.

The Panthers’ shipping of Trai Turner looks ominous in hindsight

The trade involved the Panthers moving Trai Turner to the Chargers for Russell Okung.

Not only did the Panthers trade away Turner, a 26-year-old Pro Bowl guard, but they traded him for an older and more expensive player who was non-committal on retirement the year previous.

Okung is now 32, only played in seven games, and carried a $13 million cap hit. The trade alone forced the Panthers to eat $9.6 million in dead cap last season. Essentially, the Panthers paid $10 million and turned two seasons of a 26-year-old Pro Bowl guard into one season of a 30-something tackle who’s coming off a season in which he missed 10 games.

Having now played in only 13 games in the last two seasons, the Panthers need to cut bait and let him walk in free agency. Addressing the offensive line will be critical for the Panthers in both free agency and the draft, but Okung should be kept far away from those plans.

What will the Panthers do with two key offensive weapons possibly leaving?

I don’t know if there was a more surprising performance than RB Mike Davis last season. First off, the fact that anyone not named Christian McCaffrey was in the backfield was odd enough, let alone someone who had the season he did. After taking over for the injured McCaffrey in Week 2, Mike Davis finished the year with 1,015 yards and 8 touchdowns from scrimmage.

He has already predicted himself that “free agency this year is about to be crazy.”

After inking McCaffrey to a four-year, $64 million deal, the Panthers might choose to bring down his touch count to keep him on the field, and Davis proved to be a great second option. The issue is he played so well that he is assuredly going to get several calls from teams trying to get the Panthers’ free agent to sign with them.

Can the Panthers keep from losing Curtis Samuel in 2021?

While they do have WRs D.J. Moore and Robby Anderson, Samuel showed his versatility in this offense. Even last year, before the season kicked off, OC Joe Brady said Samuel “fits the mold of what we’re looking for.” It took some time to figure out the role for him given the offseason, but once they did, Samuel was all over the field.

Samuel ended the season with 77 catches on 97 targets for 851 yards (career-high) and 3 touchdowns. He was utilized in the run game as well, carrying the ball 41 times for 200 yards and 2 additional touchdowns.

Now a free agent, Curtis Samuel overperformed the $1.2 million he received from the Panthers last season. According to Spotrac, he enters free agency with an estimated $12.4 million market value on a four-year, $49.96 million deal.

Given the cap constraints placed on the team by both the reduced salary cap and questionable decisions by the former management, the Panthers might be forced to lose Samuel in the 2021 free agency period.