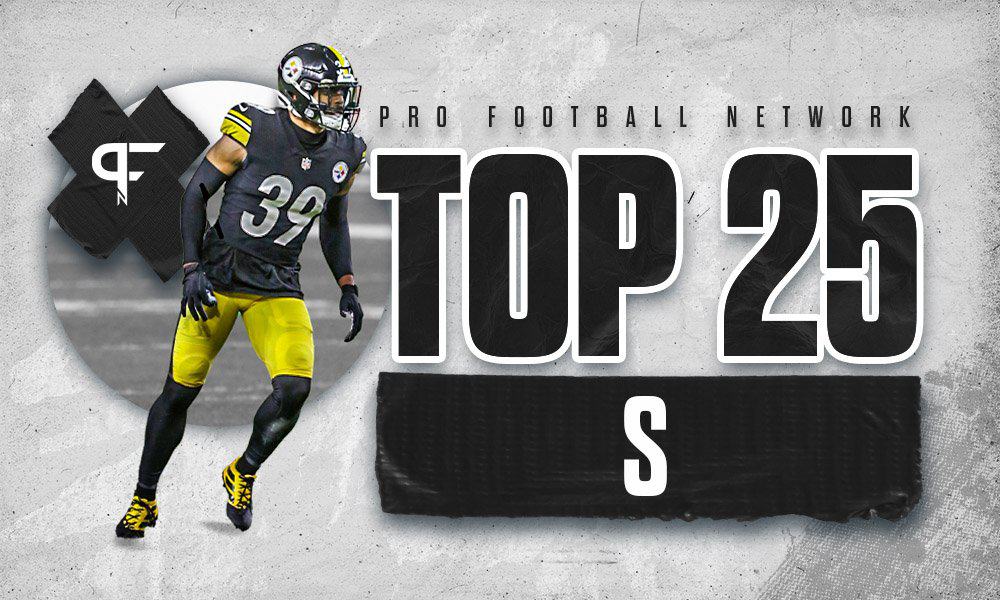 Who takes the cake as the best safety in the league?

Adams has been exposed more in coverage situations since moving from the East Coast to the West Coast. Nonetheless, his ability to make plays around the line of scrimmage is unbelievable. He provides upside as a legitimate pass rusher and still flashes enough in coverage to not drop him too far from his No. 5 ranking in 2020.

Harris struggled alongside the rest of the Vikings’ defense in 2020, but he’s not done yet. He still has some great football left in him. Philadelphia’s defensive line has names we can actually recognize, which should help him rebound as one of the top safeties heading into 2021. Harris is a traditional, rangy free safety who boasts a fantastic résumé in coverage.

Eddie Jackson’s ball production hasn’t matched his 2018 output in the past two seasons, but his ability hasn’t disappeared. He’s one of the guys on the back end that can truly do a little bit of everything. There’s no real weakness in his game, but there are so many great safeties in the league it was tough to rank him higher.

Amos has been disrespected for far too long. He’s played at a high level consistently since he stepped onto an NFL field. He’s been especially stout when paired with Darnell Savage and Jaire Alexander. Amos is seen as more of a box safety, but he can do everything necessary as one of the top safeties in the league.

Byard landing outside of the top 10 is a testament to the immense talent at the safety position. He’s a traditional free safety whose ball production throughout his career speaks for itself. The Titans’ defensive line was reminiscent of Remember the Titans — in that, they looked like a high school team trying to rush the passer. It’s difficult to find production as a defensive back when the quarterback can pitch a tent in the pocket.

This is sad. James might be the single-most gifted defensive back in the league outside of Jalen Ramsey. I had him as the top safety last year, and for good reason. He’s an unbelievable talent. Unfortunately, he’s only played five games since 2018. A healthy James is a game-wrecker, but the best ability is availability.

Smith has done it forever, just like McCourty. He aligns in the box and in the slot more often than as a traditional back-end safety for the Vikings. Yet, his versatility and ability in coverage make him one of the top safeties of the current generation. He’s an unbelievable talent, and despite playing behind a poor defensive line in 2020, he prevailed.

Baker received an All-Pro nod in 2020, and he’s a fantastic player overall, especially on an Arizona defense that is nothing to write home about. He can play anywhere on the defensive side of the ball. He has even flashed ability as a blitzer. Despite the accolades, he is on that next tier behind the upper-echelon safeties in 2021.

With a premium put on coverage, Williams deserves a place high on the list of the best safeties in the league. He’s the quintessential free safety who possesses excellent range and the propensity to get his hands on passes downfield. What makes him so special is his overall ability. This young man misses tackles less often than we flip the calendar during the NFL season. It wouldn’t be surprising to see him grab an All-Pro spot at some point soon.

Like Baker, Maye has been outstanding despite playing on an underachieving football team. The Jets haven’t had a pass rusher to get excited about since Maye entered the league. What makes him so impressive is his change of responsibilities in 2020. He played a more versatile role with the departure of Jamal Adams. He’s a traditional, rangy free safety who proved he can do it all in 2020.

The final four spots were nearly impossible to stack. Simmons is one of the top coverage safeties in the NFL as a traditional free safety. The Vic Fangio defense suits Simmons incredibly well, and adding Patrick Surtain II and Kyle Fuller to that defensive backfield will only make things easier for Simmons.

Fitzpatrick played many roles for Alabama and the Dolphins. Since his trade to the Steelers, he’s moved to a more traditional free safety position, and he’s been one of the most productive defensive backs in the league. He immediately transformed Pittsburgh’s defense to the chagrin of Miami fans around the world.

Mathieu is one of the most recognizable names and faces in the NFL. Additionally, he’s one of the best players in the league. His versatility as a defensive back is, and always has been, his calling card. The do-it-all defensive back tackles well, covers well, and is a playmaker in the secondary.

Bates is the best pure free safety in the league heading into 2021. His success at the highest level is proof that struggling as a run defender coming out of college isn’t a death sentence. It helps when you can cover a continent as a single-high safety. He still has issues finishing tackles at times, but any free safety that affects the passing game like Bates doesn’t need to be Jamal Adams against the run. He was the Bengals’ first All-Pro since 2015.