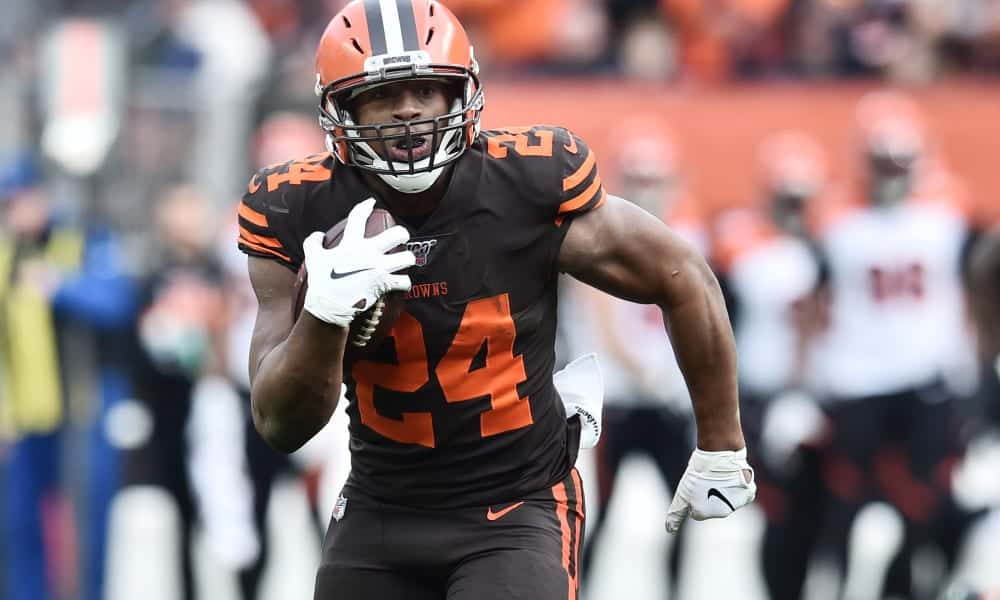 I mentioned David Montgomery as a breakout candidate earlier, and Kenyan Drake is another player poised for success in 2020. After essentially wasting away in Miami, Drake was dealt to the Arizona Cardinals last October. In eight games, Drake rushed for 643 yards on 123 carries. With only Chase Edmunds and Eno Benjamin behind him, and one of the better receiving corps in football, Drake finally finds himself in an ideal position to thrive.

Austin Ekeler made the most of his opportunities last season, establishing himself as one of the more dominant all-purpose running backs, rushing for 557 yards and bringing in 92 receptions for 993 yards and eight touchdowns. Melvin Gordon signed with Denver in free agency, so the backfield officially belongs to Ekeler. If he proves he can withstand the rigors of a full slate of games, it’s feasible he amasses 1,800 all-purpose yards in 2020.

The Jets’ big-ticket free agent addition a season ago didn’t quite pan out as expected, but that had little to do with Le’Veon Bell and everything to do with Adam Gase’s offense. When he wasn’t shaking off defenders in the backfield, Bell showed glimpses of the dynamic player he was in Pittsburgh. With a retooled offensive line and a healthy Sam Darnold, Bell should return to prominence.

One of my favorite running backs in the game today, Chris Carson brings a downhill, physical element to the Seahawks backfield. Considered more of a volume runner, the more carries Carson gets throughout a game, the stronger he gets — and the more defenses relent late in games. Carson’s punishing running style has often led to various injuries throughout his career, but when healthy, there aren’t many power runners you’d rather have.

When Jordan Howard left to join the Miami Dolphins in free agency, the Eagles’ backfield was officially turned over to the ascending Miles Sanders. The Penn State product came on strong in the second half of the season, establishing himself as a three-down running back. I wouldn’t rule out a 1,200-yard rushing season from Sanders, who I project to add another 50-plus catches in the passing game.

Another player who has battled a myriad of injuries during his young career, Aaron Jones started all 16 games in 2019, rushing for 1,084 yards and 16 touchdowns and adding 49 receptions, 474 yards, and three touchdowns in the air. The Packers selected Boston College running back A.J. Dillon is the second round, giving Green Bay their own version of Thunder and Lightning, which should only keep Jones even more fresh for what many expect to be his coming-out party.

Josh Jacobs burst onto the scene as a rookie last season, rushing for 1,150 yards and seven touchdowns in 13 games. The Las Vegas Raiders added the draft’s premier deep threat in Henry Ruggs III, to go along with Bryan Edwards and Lynn Bowden, which should create more opportunities for Jacobs to find running room this season.

If the Browns didn’t have Kareem Hunt backing up Nick Chubb, there is a good chance Chubb makes a run at the rushing title in 2020 — he’s that special. While I certainly expect Hunt to take some carries away from Chubb, I still anticipate the Georgia standout to put together his best season to date. Chubb is one of the best blends of power and finesse at the running back position in the game today.

As talented as Joe Mixon is, he tends to get overlooked because of where he plays. The 6-foot-1, 220-pound runner possesses innate patience at the line of scrimmage and outstanding contact balance while navigating through traffic. Mixon eclipsed the 1,000-yard rushing mark in two out of his three seasons thus far, and with the key offseason additions, he could be in store for his best campaign to date.

Alvin Kamara is one of the game’s most prolific receiving threats out of the backfield and has tremendous vision and elusiveness as a runner. He should continue to lose some goal-line touches to Latavius Murray, but Kamara is still among the best at his position.

If his playoff performances were any indication of what he could be with that kind of volume, there is a good chance Derrick Henry finishes as the top running back next season. A true volume runner, Henry will need to prove he can withstand the rigors and shoulder the load for a full season, but his running style and athleticism is conducive to sustained success.

Prior to last year, Dalvin Cook hadn’t been healthy for more than 11 games in a single season. In 2019, Cook played in 14 games, rushing for 1,135 yards and 13 touchdowns. Cook has the luxury of having one of the league’s top backups in Alexander Mattison, who offers starter upside, which kept him fresh throughout the season. If the Vikings’ 1-2 punch proves to be just as effective in 2020, I foresee a 1,300-yard campaign from the Florida State product.

The Cowboys have an abundance of offensive weaponry, with Ezekiel Elliott being the centerpiece. Whether he’s catching the ball out of the backfield and manufacturing yards after the catch or surging ahead and ripping off chunks of yards at a time on the ground, Elliott is one of the more complete running backs in the game. With an improved passing attack, Elliott should put up big numbers.

Saquon Barkely’s production dipped in 2019, largely due to missing three games due to an ankle injury, but between the key additions to the offensive line and Daniel Jones’ expected sophomore surge, Barkley, the Giants’ primary offensive weapon should have little trouble getting back on track.

The NFL’s premier all-purpose running back now gets to work with the innovative Matt Rhule, a revamped receiving corps, and a new quarterback. Christian McCaffrey will once again be the focal point of the offense, but it will be interesting to see all the different ways they choose to deploy the 2019 first-team All-Pro. I expect McCaffrey to build off a prolific third season, effectively making himself a frontrunner for Offensive Player of the Year.