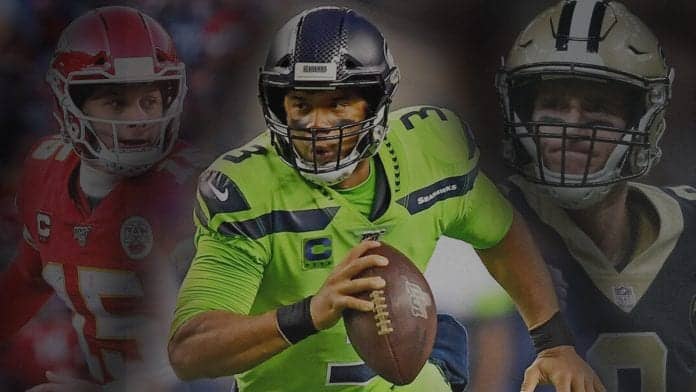 The top 25 NFL quarterbacks heading into the 2020 season

Ranking Big Ben this low was rough for me considering my admiration for the way this guy plays the game. But having evaluated the top 39 NFL quarterbacks heading into 2020, I was surprised by Roethlisberger’s low quality of play these past five seasons. While he’s been notably consistent dating back to 2017, the production hasn’t been as much him as those surrounding him. He’s not getting any younger, either.

Although Goff led the Rams to a Super Bowl in 2018, his best season was his sophomore year. His team helped him a lot the following season, and in 2019, Goff had his worst season since his rookie year, according to my evaluation. I ranked him 32nd overall in 2019, but ninth out of a qualifying 25 passers over the past three seasons. Goff may never find his way inside the top 10 in this league, but he can play like it at any time.

Another surprising find was Carr’s efficiency despite the heavy criticism that follows him. In 2019, only Drew Brees had a higher on-target percentage. And when it came to wild throws, only three quarterbacks proved better. The problem with Carr lately is one of elevating those around him. While 2019 was his best year since ’16, he still has a ways to go. The upside is still there, though.

Let’s start with the bad news. Tom Brady is on the decline. It’s real this time. Watch any game from 2018 and 2019, and you’ll see an aging passer who struggles to push the ball down the field consistently. The good news? He’s still Brady. And with a new group of (very) skilled players around him, I’m curious to see if his declining quality of play continues.

Don’t agree with my take on the film? Well, just look at the supporting data: According to Pro Football Network’s Offensive Share Metric, Brady was the 29th, 22nd, and seventh-ranked passer of 2019, 2018, and 2017, respectively.

Related: Tom Brady vs. the Patriots: Who will get more wins this season?

While former #Patriots QB, Tom Brady's arm has been trending ↘️ since '16, his quality of play is still better than 2/3 of the league over a 2-yr evaluation. He's at his best in rhythm and on-time. That's when his ball placement is still upper echelon. #Buccaneers #NFLtopQBs pic.twitter.com/1Uz6SWrHYx

With all the contract talk surrounding Prescott, you’d hope he’d rank higher. However, players like Goff and Roethlisberger are making $33.5 million and $34 million, respectively, on an annual basis. Both of those guys I consider lesser quality players heading into 2020. With that said, Prescott was a star the year he replaced Tony Romo, and while he came down to earth the following season, he’s been improving ever since.

Wentz played in all 16 games for the first time since his rookie season. His quality of play over that time has been impressive (at times). Outside of some availability concerns, it’s Wentz’s inconsistencies that have been the Philadelphia Eagles’ undoing. Even so, over a three-year evaluation of 25 qualified passers, Wentz has only been outshined by quarterbacks Russell Wilson, Drew Brees, and Aaron Rodgers. Not too shabby.

Speaking of inconsistencies, Vikings quarterback Kirk Cousins has frustrated his fans with remarkable feats in-season and less than stellar play when it matters most. Regardless, Cousins is vastly more dependable than Wentz at this time in his career. Since 2015, he’s started in all but one contest, completed 69% or more of his passes three times, and threw 25 or more touchdowns each year. I get the frustrations, but he’s easily top 12 at the position.

During my evaluation of Cousins' previous 5 seasons, I scoured through some of 2019's film study from Oct. The guy has a lot to love. I know he has some inconsistencies, but I still don't get the grudge from #Redskins and #VIkings fans. It could be way worse. #Skol #NFLtopQBs pic.twitter.com/aW9yE5AeNh

Jackson has taken over the NFL in as little as 22 starts over two seasons. During that time, the Ravens have won 19 of 22 regular-season games on their way to two playoff appearances. According to my quality-of-play evaluation, no quarterback graded higher than Jackson in 2019. And to prove that 2018 was no slouch either, Jackson was my 13th ranked passer of 29 qualifying quarterbacks in his rookie season.

His game is revolutionary but very dependent on speed, escapability, and offensive rhythm. He’s utterly a dominant force when on time, but situational stats show an above-average player in the 4th quarter with a tendency to sputter with the game on the line.

Ryan could be much higher if it weren’t for his up and down career. Luckily for him, his lows are still pretty high, though. Plus, in an era where guys like Newton, Roethlisberger, Wentz, and Brees have fell victim to injury, Ryan has been steadily dependable starting all 16 games in nine straight seasons (2010-2018). In fact, he’s only missed three games in his 12-year career. Since 2015, Ryan has completed 65% or more of his passes each season and topped 4,000 yards in nine consecutive years.

Stafford is an excellent example of falling victim to injury recently. After eight seasons of perfect attendance, Stafford missed eight games in 2019. But despite playing only half the year, Stafford averaged 312.4 yards per game (second most in the NFL) and threw more touchdown passes (19) than Jacoby Brissett (15 games), Mitchell Trubisky (15 games), and Andy Dalton (13 games).

I'm probably much higher on Matthew Stafford going into '20 than most, but this guy HAS & still DOES ball out on a year-to-year basis. He's consistently productive and brings the "JUICE." This was supposed to be a stout #Chargers secondary in 2019 #Lions #OnePride #NFLtopQBs pic.twitter.com/DARSFvFLG6

In 2019, Watson didn’t have his best season. In fact, it may have been his worst as a pro. Still, Pro Football Network’s OSM says he was 10th best at the position last year. Watson does so much for a franchise hell-bent on destroying itself, and I don’t believe they’ll ever be able to fully implode unless they let one of the top NFL quarterbacks in 2020 go elsewhere. He’s too good.

While Rodgers’ tape indicates a slight loss of the arm talent he’s so known for, he still proved highly effective in leading the Packers to a 13-3 record. In the past two seasons, Rodgers has thrown for nearly 8,500 yards with 52 scores to just six interceptions. His career is surely winding down, but there’s only a handful of guys I’d rather have under center than Aaron Rodgers.

The most important attribute for a quarterback, in my mind, is accuracy, and no passer has been more accurate in recent history than Drew Brees. We all remember 2018 when it seemed Brees lost his luster late in the season, but he must’ve taken it personally.

In 2019, one of the best preparers in the game completed a career-high 74.3% of his passes and concluded the season with a 116.3 passer rating, albeit in 11 starts. Still, it’s the highest passer rating he’s had for a single season in his illustrious 19-year career.

#Saints QB, Drew Brees held the highest on-target % of any #NFL passer in 2019. In fact, it wasn't even close. And all trick shots aside, the dude brings it every week and is undoubtedly my highest graded QB in regards to accuracy. #NFLtopQBs pic.twitter.com/vg5o9XprfI

Mahomes is not my top NFL quarterback ahead of 2020, but he’s very close. The truth is, Mahomes has been so good in such a short amount of time that I’ll probably get blasted for not ranking him number one. No one expected he’d replicate 2018’s numbers, so I have no qualms with his ’19 tape, it’s all good. Mahomes’ statistics, success, and effectiveness late in games give him a shot at being the NFL’s top quarterback for 2020 and beyond.

Russell Wilson received my hypothetical vote for MVP in 2019. I’m not taking anything away from Lamar Jackson, but the Ravens could’ve still won their division with several other quarterbacks. At the same time, the Seahawks were often kept afloat by Wilson alone. Only Brady and Rodgers graded better in a five-year evaluation. And over the last three seasons? Wilson reigns supreme with only an aging Drew Brees nipping at his heels.

He’s tossed 31 or more touchdowns in three consecutive years, having thrown single-digit interceptions in five of eight. Having been consistently pressured, sacked, and pushed to his limits, Wilson has yet to miss a single start in his career. Russell Wilson is unequivocally the best representation of what a franchise is looking for in a signal-caller and my top NFL quarterback of 2020.

Six players with just one season to assess were excluded from this list, and here’s how I stacked them up against one another.