This year's rookie class was chock full of talent. Which player is going to be good enough to take home the 2020 NFL Offensive Rookie of the Year award come February?

Last season, the Kansas City Chiefs had one of the most incredible runs in recent memory as Super Bowl champions. Then, the offense got arguably even better with the first-round selection of Clyde Edwards-Helaire in the 2020 NFL Draft. So why is Colts rookie RB Jonathan Taylor on this list instead?

Though there isn’t as strong of a correlation between an “Elite” RAS grade and winning Offensive Rookie of the Year as there is with the defensive award, a trend is still present. Of the 13 winners who registered a RAS grade, only four scored below the “Elite” level. Two of those four were running backs, and only Eddie Lacy’s RAS grade was lower than Edwards-Helaire’s RAS grade of 5.43.

Taylor, on the other hand, fits well within the RAS parameters and was considerably more productive at the college level than his former LSU counterpart. Taylor turned in a RAS grade of 9.53 at the Combine, scoring as “Elite” in the speed category thanks in part to his blazing 4.39 40-yard dash. He also posted a “Great” explosion grade and “Good” agility scores. The athleticism is there, but will the opportunity be? 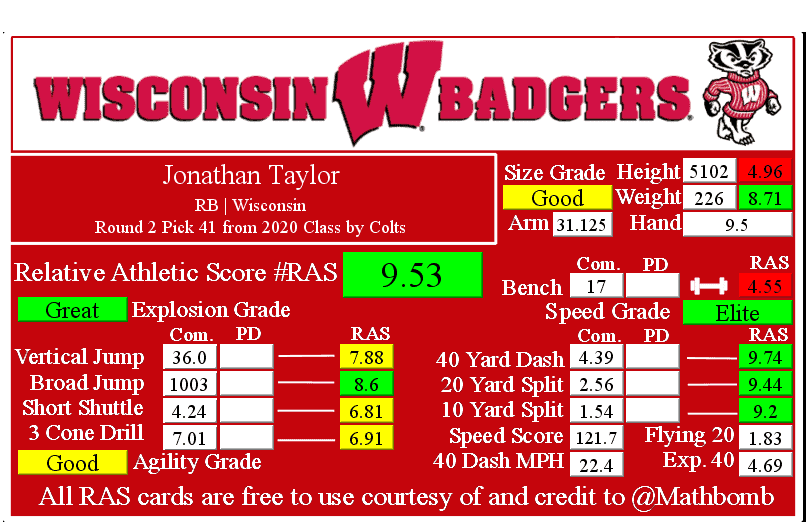 Taylor is looking at a split backfield with incumbent running back Marlon Mack. Mack is an elite athlete in his own right, posting a RAS grade of 8.78 in 2017. However, the fact that Indianapolis drafted Taylor at all should tell us something. They also spent considerably more draft capital on Taylor, a second-round pick, than Mack, a former fourth-round selection.

Taylor is likely going to see a majority split of the hand-offs in the Colts offense, with Mack being the primary pass-catching running back. However, don’t discount Taylor’s ability in the passing game. He was not asked to do much in the way of receiving at Wisconsin, but it is a trait he displayed pretty well on tape in his final season with the Badgers.

The last of our candidates for 2020 NFL Offensive Rookie of the Year is a bit of a longshot. Athletically, Washington Redskins rookie Antonio Gibson fits the bill. Gibson turned in an “Elite” RAS of 9.29 at the NFL Combine, with “Great” speed scores and “Okay” marks in the explosion testing, while not participating in the agility drills. 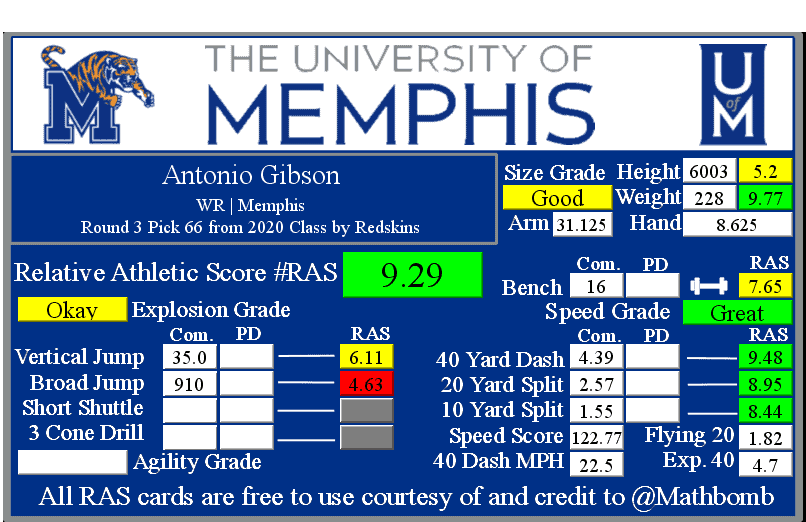 The question with Gibson, like many of the other candidates on this list, is going to be the opportunity. What the Redskins choose to do with Gibson’s unique skill set will go a long way towards determining if he can be a viable candidate for the award. Gibson should provide the offense with a chess piece that poses a match-up nightmare for opposing defensive coordinators.

As a running back, Gibson be a nice change-of-pace back to pair with Derrius Guice. Gibson would handle the lion’s share of the pass-catching duties in that scenario, and would also take some of the pressure off the oft-injured Guice in handling the carry load, along with Adrian Peterson. As a receiver, Gibson can line up in the slot and make coordinators choose whether to assign a linebacker, safety, or corner to cover him.

If used well, Gibson’s production as both a runner and receiver should put in him the 2020 NFL Offensive Rookie of the Year conversation. He may not come home with the award, but he should at least be in the conversation.