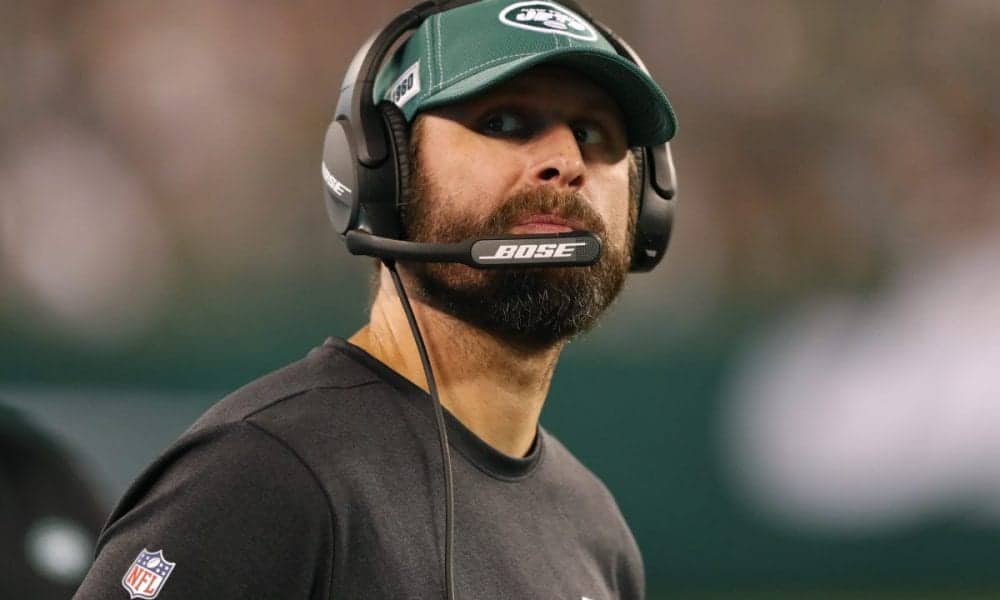 Every week, I open up the mailbag for anyone to send me their questions on the current college football season, the NFL, or the 2020 NFL Draft. This week, the mailbag includes questions on Chase Young, Joe Burrow, and Zac Taylor, and Matt Rhule. But we start with some information on Adam Gase’s future with the New York Jets and what Jets General Manager Joe Douglas might have to say about it in an upcoming press conference at 5:30 PM ET today (Tuesday).

There has been a lot of talk that head coach Adam Gase could be fired soon by the New York Jets. What are you hearing and what is your take on the job Gase has done this season?

I spoke with several people about the Gase situation in recent days and there is no sense or belief he will be fired any time soon. Joe Douglas is expected to hold a press conference on Tuesday at 5:30 PM and I would expect him to say as much. He’ll likely also address the trade rumors around Le’Veon Bell, Jamal Adams, and Robby Anderson.

It could be a situation where he is fired during the final few weeks of the season if the Jets continue to play awful football, which I expect. But there are some people who think Gase will return next year. Some feel the contract given to him by the Jets in January plus the fact that Gase green-lighted the hiring of Joe Douglas, will get him a year reprieve.

I don’t have the same opinion.

If the Jets continue to be doormats every game and still bring Gase back, the franchise risks completely alienating the fan base which is already turning apathetic – and nothing could be worse.

As far as my take on the season, I’m not surprised one bit and Gase has delivered everything I expected – awful football. I thought he was a bad hire and said as much during interviews the days after the Jets fired Mike Maccagnan. My quotes were consistent on the situation – the Jets were running out of warm bodies and desperately needed a coach after being snubbed by Matt Rhule and giving a half-hearted effort toward Mike McCarthy. Gase desperately wanted to stay in the league as a head coach. It was a marriage made in Heaven – or a lot further south if you like.

All one needs to do is look at how well Ryan Tannehill has been playing for the Titans in recent weeks to see the Jets made the wrong choice at head coach.

Tony, if Jadeveon Clowney and the Bosa brothers couldn’t get legit Heisman talk, should we really expect Chase Young to do so? Is he your Heisman favorite right now?

The answer to Chase Young is no. That said, the reason for that is because of two factors – there is plenty of dynamic offensive talent from many of the top contenders this season and it’s tough for a defensive player to get serious consideration for the Heisman Trophy.

The pecking order could change based on next week’s LSU-Alabama contest. The loss to Kansas State last week hurts Hurts (ha-ha!). Fields has been very good and while his TD numbers are terrific his overall yardage is down compared to the rest as Ohio State has blown out teams from the get-go and Fields often does not have to throw the ball in the second half.

Is Zac Taylor really going to be a one and done head coach for the Bengals instead of leading a young roster for years to come after they’re done rebuilding?

I’d be shocked if Taylor is fired after this season. Putting aside the fact he walked into a bad situation, it’s not the style of Cincinnati Bengals owner Mike Brown to cut a coach with so many years left on their contract. It’s more than just giving Taylor a fair shot – it has to do with the Bengals and Mike Brown being cheap.

I think we can all agree Matt Rhule has done a great job at Baylor. However, should I be even more worried now than last year about losing our head coach this upcoming offseason?

Yes – it could be to another big-time college football program (Tennessee? Mississippi? UCLA?) or to an NFL team.

I’m sure right about now Jets owner Christopher Johnson is wishing he had not been so adamant on selecting Rhule’s assistant coaches, or letting Mike Maccagnan hire them, as a pre-requisite for hiring Rhule as the head coach.

From what I recall, you’re not one that is too big on comparisons. But I can’t resist, I have to ask: Is Khalil Tate’s ceiling as an NFL quarterback similar to that of Indianapolis Colts’ Jacoby Brissett?

You could make the argument Tate is a better athlete than Brissett. But when looking at both players at equal points in their career, Brissett was head and shoulders a better passer and overall quarterback prospect than Tate – it’s not even close.

I thought Brissett was incredibly underrated coming out of North Carolina State. He was smart, patient, played from the pocket and did a great job leading the offense. He had a poor week of practice at the Senior Bowl which hurt his draft stock, but I knew if coached correctly he could play in the NFL. No irony that the Patriots drafted him. I think Brissett’s success also tells us a lot about Frank Reich.

Tate is just too up and down. He’s never shown any consistent progress or development in his game since his sophomore season when many predicted he would be the next great quarterback prospect.

For the heck of it, I pulled out the Analysis section of my scouting report on Brissett prior to the 2016 draft:

“Brissett is an athletic signal-caller that can play from the pocket or throw on the move. He possesses the physical skills to play the next level and is advanced as a passer. He offers possibilities in a variety of offensive schemes and if coached properly could develop into a productive starter on Sunday.”

What do Tristan Wirfs and other highly regarded tackles need to do to get close to the level of Georgia’s Andrew Thomas?

I don’t know that they can. As far as athleticism, agility, footwork and being a natural fit at the all-important left tackle position, Thomas is much better than anyone else on my board.

Wirfs has a size and power advantage, but the athletic and agility factor lends to more versatility for Thomas.

I don’t think Hurts ends up in the first round – rather, he’s a day two selection. Burrow could move into the top half of round one if he has a productive and mistake-free game against Alabama, continues to play at the level he’s been playing, and then (and this is most important for Burrow) shows up at the Senior Bowl and plays well.

Chase Young could go very early in the draft. He’s a natural pass rusher and forces the action up the field. How many teams, starting with the Jets, regret passing up on Josh Allen these days? Ditto for those who might do the same with Young.