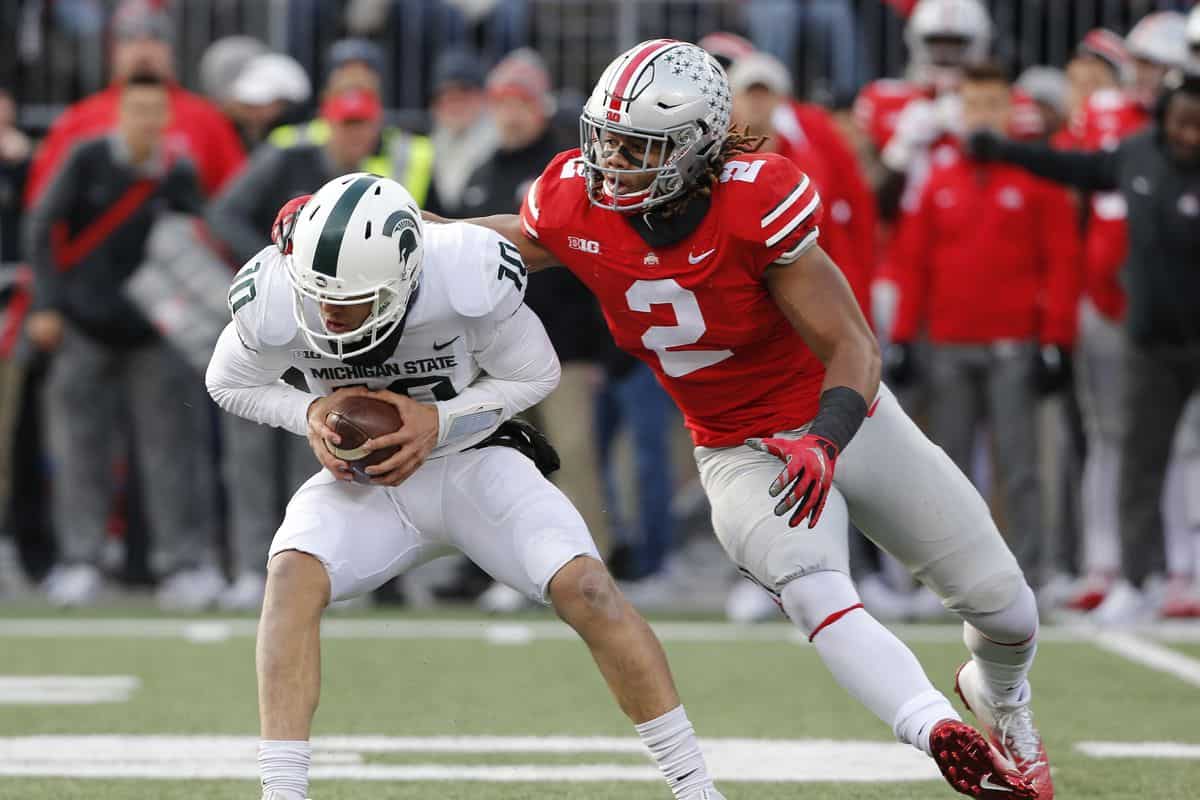 Chase Young has burst onto the scene in 2019, looking like not just the best prospect in the 2020 NFL Draft, but the best player in the entire country. He’s the leading case for a defensive player to make it as a Heisman finalist and has dominated every single opponent the Ohio State Buckeyes have played this season. He’s posted an incredible 15.5 tackles for loss and 13.5 sacks this season, to go with five forced fumbles in just eight games. He has a chance to break Terrell Suggs’ single-season record of 24 sacks.

Young appears to be a lock for a top-5 selection in the upcoming 2020 NFL Draft, and only a quarterback can keep him out of becoming the number one overall pick of the draft. How does Young compare to the top pass rushers of the last few drafts?

While there aren’t any official numbers on Chase Young just yet, it’s obvious he is going to test like a complete freak. We can take a stab at guessing his numbers next to the other players.

The combine is still months away, but we can still make some educated estimates. The bottom line is that Young is an athletic freak on the level of Myles Garrett.

Of this group, the only player who comes close to Young’s overall athletic profile is Garrett. Garrett’s combine dominance certified him as the number one pick in the 2017 NFL Draft, and Young’s testing at the combine could do the same for him. Young’s explosiveness in his lower half should gives him a slight edge over the pack.

Young has more sacks than all but Garrett at this stage, but by season’s end, he will likely match that production. It’s also important to note that Bosa had injuries, as well as snap counts, that cut into his production. Garrett has the edge per game, however, so we will give this one to the 2017 number one pick.

There’s a lot to break down in this category so there are a few areas I’ll highlight under the umbrella of pass-rush skills: bend, “Pass Rush Plan” (moves/counters), motor, and first-step. I use these as grading points in my grading scales for pass-rushers as prospects. Here were my grades (out of 10) for past players:

Garrett’s ability to bend at 272 pounds was just downright uncanny, and Young has that same ability as a pass rusher. His ability to corner at the top of his rush is elite, and when combined with his explosiveness off the line of scrimmage, Young puts pressure on opposing offensive tackles almost immediately. I don’t think Young is as developed as either of the Bosa’s in terms of their overall pass rush plan right now. Joey has been the only 10 I’ve ever given in this category to a pass-rusher, as his ability to string together multiple pass-rush moves was incredible in college, and it still is in the NFL.

See why Garrett has been the popular pro comp for Young so far?

Much like “pass-rush skill”, “run defense” is an umbrella term for different categories. I use “Power at Point of Attack” (POA), “Anchor” (ability to set the edge), and “Block-Shedding”. Again, here are my grades out of 10 in each of these areas. I believe run defense is important for pass-rushers, and is often overlooked with prospects.

Grading Young against the run is still a work in progress. Much like Garrett, teams often run away from Young. When he gets the opportunity, he is a disruptive force, but his tape is just too limited in this area to give him an edge over others in this grouping.

Bradley Chubb had the best overall power of all of these players, which is why he has already had great success in the NFL and recorded as many TFLs as he did. Both of the Bosa’s were great against the run, but Joey got sloppy or lazy sometimes and wasn’t effective against many double teams in college, while Nick just didn’t have the overall strength that the others on this list showed. Teams constantly ran away from Myles Garrett, so it was difficult to gauge just how effective of a run defender he was.

I know there have been questions about how Young stacks up against the premier pass rushers of the past few years. Pro Football Network’s Tony Pauline and I disagree on this topic. Tony believes that Young is an athletic pass-rusher in need of development and isn’t on the level of either Bosa or Myles Garrett. While Chase Young is not as developed as Joey or Nick Bosa in terms of their pass-rush plans, Young has developed in this area tremendously this season and still has plenty of traits to build off of in this area. I also believe that Chase Young is not a liability against the run, akin to Myles Garrett coming out of college. All of these pass rushers were drafted in the top-5 of their respective NFL Drafts, and there is no reason to believe that Chase Young won’t be either.

All of these players were no-brainer prospects, all for different reasons, and all of them have found phenomenal success at the next level. The Bosa brothers were dominant technicians who have a successful athletic pedigree, despite not being the most “athletic” players out there. Bradley Chubb was a powerful force who was equally as good in both the run game and as a pass-rusher. Myles Garrett is one of those “once-in-a-generation” athletes who had incredible traits despite not being as “refined” as either of the Bosa’s and was compared to Julius Peppers. Young has that same gifted frame and traits as a pass-rusher and has a legitimate case for the number one overall selection in the 2020 NFL Draft.