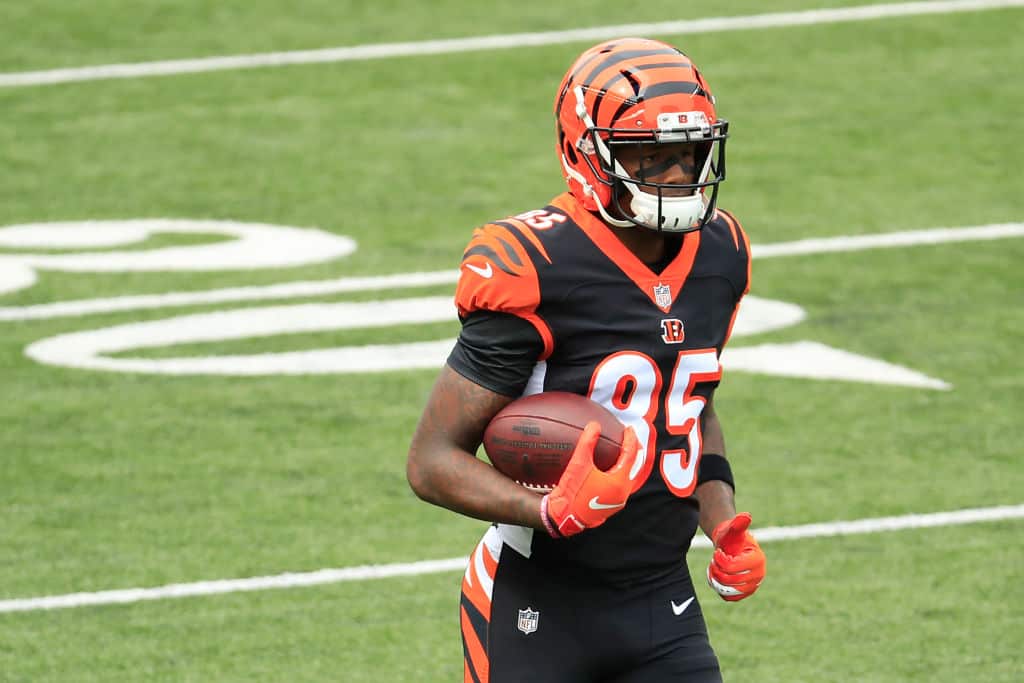 CINCINNATI, OHIO - SEPTEMBER 13: Wide receiver Tee Higgins #85 of the Cincinnati Bengals warms up before playing against the Los Angeles Chargers at Paul Brown Stadium on September 13, 2020 in Cincinnati, Ohio. (Photo by Andy Lyons/Getty Images)
What's in this article? Click to show
Tee Higgins has a chance to become Cincinnati’s top target
A.J. Green’s continued struggles
Week 3 brought an opportunity for Higgins to make an impact

In 2011, the Cincinnati Bengals decided to rebuild their offense. After drafting A.J. Green fourth overall and Andy Dalton in the second round, the two combined forces as the cornerstones of the offense over their nine-year span. In 2020, the picks flipped with a quarterback in the first round and a receiver in the second. After three poor outings from Green, it’s time for Tee Higgins to step up and start his ascension to becoming the WR1 in Cincinnati.

After playing 15 snaps in Week 1 against Los Angeles, Higgins tripled his playing time in Week 2. Recording 60 snaps, beating out the likes of former first-round pick John Ross, the former Clemson product immediately made an impact. Week 3 saw him play an even bigger part in the offense with nine targets, six receptions, and two touchdowns.

For Burrow, he’ll need to build a connection early with one of the talented receivers. With other targets struggling, Week 3 could become the moment where Higgins started to go from just a second-round pick to the Bengals WR1.

Tee Higgins has a chance to become Cincinnati’s top target

Early expectations have not yet been met

When drafted out of “Wide Receiver U” in April, the Bengals knew they’d be getting an intermediate target to add to an underachieving arsenal. As PFN’s Tony Pauline’s pointed out, it’s his hands and coordination in traffic that made him a fringe first-rounder.

“Explosive game-changing receiver with terrific size and speed. Fluidly releases off the line of scrimmage, quickly gets to top speed, and displays himself as a solid vertical threat,” Pauline wrote. “Possesses terrific hand-eye coordination and focus, extends his hands, and plucks the ball from midair. Uses his frame to shield away defenders, nicely adjusts to the errant throw, and wins out in battles.”

Week 2 was promising for the Bengals’ aerial attack and the budding connection of Higgins and Burrow. One look at his first catch showed the potential of multiple highlight moments in the duo’s future.

On second-and-14, Higgins saw the needle threaded between a pair of Browns’ defenders. It was a perfectly timed throw for Burrow to release in coverage and a quality snag from Higgins. That reception would put Cincinnati in field goal range just before the start of halftime.

“He (Burrow) can move,” Higgins said. “You’re gonna get a lot of scramble drills in-game situations, so we just got to go out there and practice. And you really can’t really just work on it. This is something you’ve got to have instinct. You see Joe’s scrambling, you’ve got to go make a play.”

Higgins was bound to crawl his way up the depth chart eventually. Sure, Tyler Boyd’s recent success likely makes him the team’s top target in 2020. However, Higgins likely was brought in as the eventual replacement for Green after two injury-ridden seasons.

Father time might be catching up to Green after a slow start to begin the new decade. In Week 1, the 32-year-old could have been the hero with a late touchdown grab. Instead, he was penalized with an offensive pass interference call that ultimately cost Cincinnati their first win. Four days later, Green was targeted a team-high 13 times. He finished with just three catches for 29 yards.

“He was playing well at the beginning of the game,” Burrow said on the lack of connection. “I missed some throws to A.J. again. I’m just going to have to fix that. I can’t keep missing throws to A.J. when he gets open like he does.”

Sure, Burrow will have to improve when Green gets open. What happens when he flat out drops the pass? Three balls hit his hands before falling to the ground. Two more were catchable if not for quality coverage.

Green is closing in on every receiving record in Bengals’ history. He’s four touchdowns away from becoming the all-time leading scorer and just under 1,800 yards shy of beating Chad Johnson in receiving yards. One of those goals could be met by the season’s end.

It also allows Higgins to learn under the like of one the last decade’s top pass-catchers.

“He definitely has been a great mentor,” Higgins said of Green. “Just basically telling me the ends and out of the position, how I can beat the defender in front of me. How I can come out the top of my routes on certain coverages.”

Week 3 brought an opportunity for Higgins to make an impact

There wasn’t a winner when the clock struck zero in overtime at Lincoln Financial Field. If the Bengals could take anything away from the 23-23 tie against the Eagles, it’s that Tee Higgins is starting to blossom.

Much like in the 2000s when fans saw Carson Palmer and Chad Johnson connecting, #9 to #85 was alive and well once more. Higgins’ was targeted nine times, hauling in a season-best five catches for 40 yards. However, perhaps more importantly, he was effective in the red zone. In the second quarter, Burrow found a wide-open Higgins towards the back of the endzone for a one-yard touchdown. In the third, the Clemson product registered another touchdown thanks to busted coverage from Philadelphia. That second touchdown would give Cincinnati a 17-16 lead with 17 minutes remaining in regulation.

Perhaps the biggest surprise of the day came early when the team elected to leave John Ross inactive. The former ninth overall pick has been playing for a new contract but has yet to make an impact in a “prove it” year. Add in Higgins’ snap count over the past two weeks and it’s clear which direction Taylor could be headed with his receiving core.

Tyler Boyd will soon become the leading receiver after finishing with 10 catches for 125 yards. Teams still will be covering Green thanks to his veteran presence on a limited roster. That likely leaves Higgins seeing weaker coverage and could see him transform into a competent second option. However, in the red zone, Week 3 demonstrated that even as the second or third option on the team he could be an x-factor.

Cincinnati’s offensive line woes will have Burrow looking lost at times, but having a check-down option usually helps a young quarterback develop faster, so the eight yards per reception average for Higgins in this game should not be a concern. The connection is growing between the rookies, giving fans of the orange and black a chance to relive the glory days and bring promise for the organization’s future.