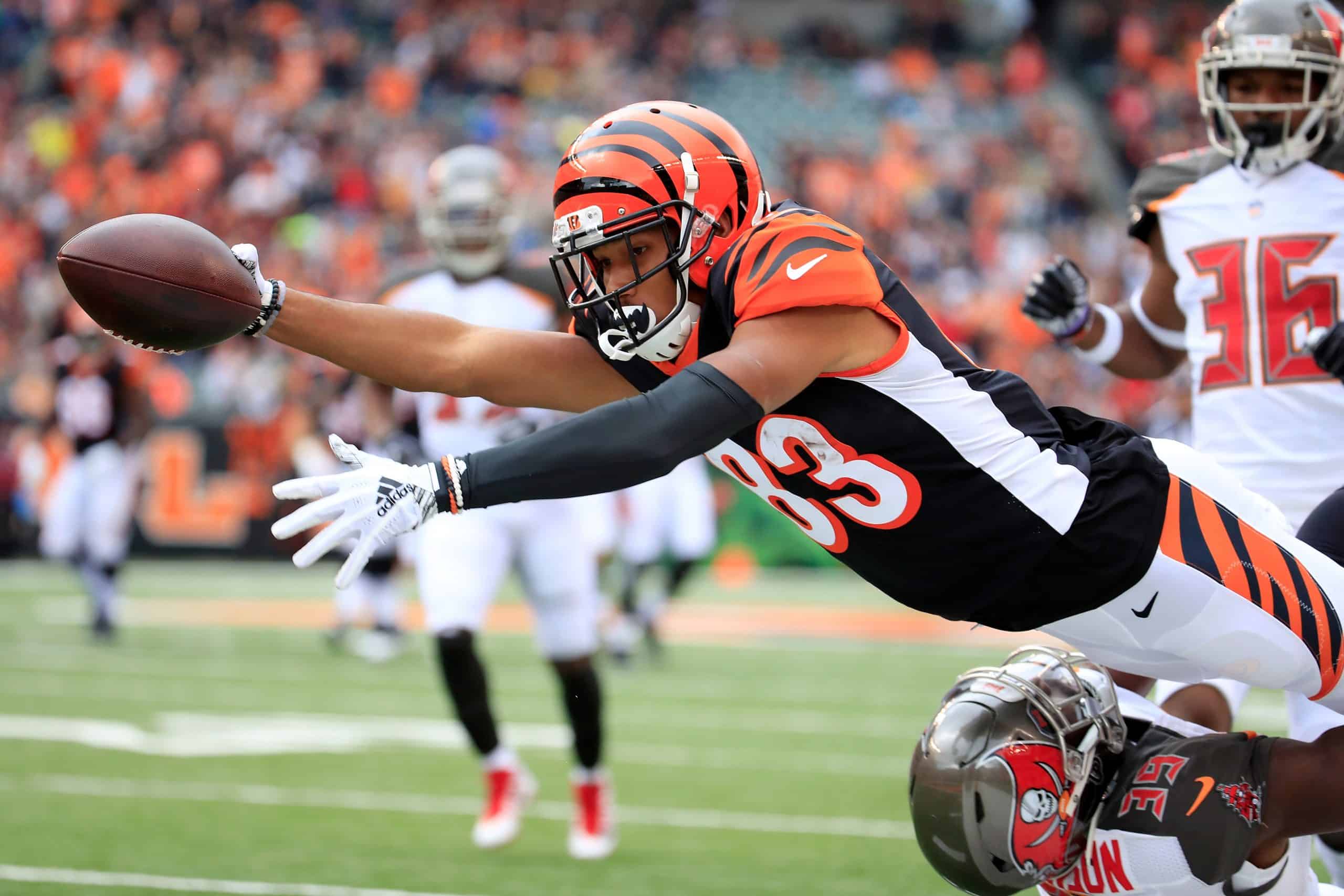 CINCINNATI, OH - OCTOBER 28: Tyler Boyd #83 of the Cincinnati Bengals dives over Isaiah Johnson #39 of the Tampa Bay Buccaneers in an attempt to reach the end zone during the first quarter at Paul Brown Stadium on October 28, 2018 in Cincinnati, Ohio. Boyd was knocked out of bounds just short of the goal line. (Photo by Andy Lyons/Getty Images)
What's in this article? Click to show
Three Bengals players to watch against the Eagles in Week 3
QB Joe Burrow
DT Geno Atkins
WR Tyler Boyd

Too little, too late seems to be the theme of the season thus far for the Cincinnati Bengals. They sit at 0-2 despite showing some reasons for optimism late in both games. Week 3 sees the Bengals face off with a fellow 0-2 team in the Philadelphia Eagles, and they have a good chance of registering their first win against another struggling team.

The Bengals have a host of issues to sift through to get back on the right track, though suspect offensive line play and incompetent run defense are among the problems most exposed right now. However, when there are issues surrounding the team, that is when individuals most need to step up and make a name for themselves. Here are three players the Bengals need to step up this week as they look the get their first win of the season.

Three Bengals players to watch against the Eagles in Week 3

This selection isn’t much of a surprise. Burrow has been a player many have turned their attention to since he was selected by the Bengals at No. 1 overall in the 2020 NFL Draft, having put together one of the best individual seasons we’ve ever seen out of a college football player.

Burrow himself has recorded a pair of solid individual performances in his first two NFL games, despite giving himself a grade of ‘D’ for the first one. Aside from a few small mistakes, Burrow has looked accurate and poised for the most part.

In the Bengals’ most recent loss, Burrow completed 37-of-61 passes for 316 yards and three touchdowns with no interceptions. That total number of passing attempts in the most by a rookie quarterback since 2001, and makes him the first rookie since 1950 with 60 or more pass attempts and zero interceptions in a single game.

Burrow has the chance to become great at the NFL level quickly, and even more importantly, the Bengals have a chance to start consistently winning games if their offensive line can pull themselves together and give him time to succeed.

The Bengals’ defensive effort last week was poor enough to the point they almost looked like they didn’t even want to tackle. Now, while it is worth considering that Nick Chubb is one of the most formidable rushers in the league to go up against, the Bengals simply need to do better in this area if they don’t want to leave the offense needing to bail them out more times than not. That change starts upfront in what should be the strength of this team.

Atkins is a player they could potentially get back for this week’s matchup, as the eight-time Pro Bowler has missed the past two consecutive games with a shoulder injury.

“We’ll see. I think there’s a chance,” Bengals head coach Zac Taylor told reporters when asked about Atkins’ potential return. “You can’t make that prediction. We’re still 10 days out from a game. We’ll continue to monitor him this week and see how it goes.”

Atkins is a huge part of what makes that defensive line a strength of this roster. If the Bengals can get him back on the field against a woeful Eagles offensive line then Atkins and his companions on the line could wreak havoc for Carson Wentz and Miles Sanders in Week 3.

Burrow and wide receiver A.J. Green didn’t get the type of chemistry going that some would have hoped for so far, but he’s certainly been hitting it off in the air with Boyd.

Aside from one drop in the endzone that he should have had, Boyd was solid in his Week 2 showing, reeling in seven of eight targets for 72 yards and a touchdown. And how about that toe-tap? With a solid game together in the books now, look for Boyd to be a factor once more this week.