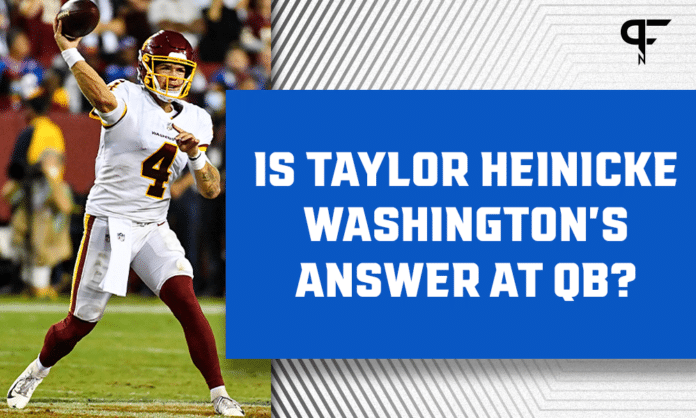 Taylor Heinicke might not be the Washington Football Team's QB of the future, but should he start over Ryan Fitzpatrick after his return?

By Dalton Miller
September 17, 2021
What's in this article? Click to show
Why Washington fans love Taylor Heinicke
Five throws telling a story
Can Washington lean on Heinicke as their QB for 2021?

QB Taylor Heinicke and the Washington Football Team offense played well against the New York Giants on Thursday Night Football. Heinicke was efficient — he took what the defense gave him. From a purely passing perspective, he stood toe to toe with Daniel Jones, but the numbers give us a conflicting message, depending on what you’re looking at. Can Washington compete with Heinicke under center for the rest of 2021?

Most fans of the franchise adore Heinicke. He brings the same type of excitement to the game that spurned “Minshew Mania.”

He’s an underdog. In 2015, the Minnesota Vikings signed him as an undrafted free agent out of Old Dominion. He stuck around as a reserve quarterback for Minnesota until September 11, 2017, when he was waived/injured.

Eventually, after brief stops in both New England and Houston, he landed in Carolina in 2018 with Ron Rivera and Scott Turner. That’s when he made his first and only start in Carolina. It was an uninspiring 3-interception outing in which he suffered an elbow injury and landed on IR. He was part of their final roster cuts in 2019.

Washington fans, however, love him because of the plucky performance he put on in last year’s playoff matchup against the eventual Super Bowl champions. He’s the underwhelming physical talent that was unheralded coming out of ODU that almost got the job done in a playoff game. Yet, could Heinicke be the answer for Washington, even when Ryan Fitzpatrick returns?

Heinicke threw the ball 46 times against the Giants on Thursday. Even so, there wasn’t much that fell outside the realm of expected outcomes. However, five passes throughout the game tell a story, both of hope and horror.

Heinicke dropped back on a play-action pass early in the second quarter and delivered what I believe to be his version of a strike to Terry McLaurin.

Side note: McLaurin still doesn’t get the attention he deserves. He might be the most underrated star receiver in the league.

Now, this was a far throw. Heinicke threw this ball from between the hashes at the 36, and McLaurin caught the ball close to the sideline at the 10-yard line. It was a satisfactory completion, and McLaurin did a great job attacking James Bradberry’s blind spot to separate.

The ball is placed well, allowing McLaurin to track it back toward the line of scrimmage and away from the threats coming from the inside. However, Heinicke’s lack of arm strength is evident here. Heinicke waits until he sees McLaurin uncover and Bradberry speed turn because if he throws it before Bradberry declares his leverage, he could drive and intercept the pass.

Overall, it’s a positive play, but it did provide insight into Heinicke’s limitation — his arm strength.

The next play displayed all the positives surrounding Heinicke’s game. Despite having only a few career starts, he made a very veteran play to give the Football Team their first touchdown.

The Giants showed zone coverage, and Washington dials up an outstanding play call that Heinicke and McLaurin run to perfection. Washington aligns in a 2×2 set in 13 personnel. Two tight ends are in-line to the boundary. Heinicke is in shotgun, and the back is beside him to the field side. Logan Thomas is aligned in the slot on the right with McLaurin out wide.

The Giants pivot to Cover 3 post-snap, which the play call seems to anticipate. Thomas runs a 5-yard stop route that occupies the slot defender. It also occupies the linebacker to the field side, who is responsible for that area of the zone. The slot is probably reading No. 2. But if Thomas runs any out-breaking route, it would free up the linebacker to key directly on McLaurin and possibly make a play on the ball. The addition of McLaurin’s post route makes for a nice Cover 3 coverage beater.

But Heinicke is the one that makes this play work.

On the snap, he does a great job initially holding the single-high safety on the left hash. He looks left initially, sticks his foot back in rhythm, and knows Bradberry doesn’t have a chance.

Don’t let anyone tell you that ball was thrown behind, either. That was leveraged away from the middle of the field, and McLaurin created enough separation to allow that throw. Heinicke was keeping the pass away from trouble over the middle.

On 2nd and 3, the Giants showed a two-high shell with both safeties comfortably out of frame. Heinicke tried to write a check his right arm couldn’t cash.

Washington ran a vertical concept on the offense’s right side, with both outside and slot receivers pressing directly north. With the slight outside release from Adam Humphries, the spacing between him and McLaurin was condensed. Heinicke doesn’t have the release quickness or velocity to make the throw he attempted.

On a bang-bang play, Washington was bailed out by Bradberry getting to Humphries a hair before the ball did.

The Ricky Seals-Jones touchdown pass was outstanding. There was a bit of frantic movement in the pocket for a split second, but Heinicke reset and delivered an absolute peach to the back corner of the end zone for a touchdown.

The Football Team ran another vertical concept against a two-high shell, and this time Thomas kept the vertical route up the seam, keeping the safety occupied. From there, it was all about choosing a matchup Heinicke liked most on the outside.

He picked a good one. Seals-Jones is 6-foot-5. The defender, Adoree’ Jackson, is 5-foot-10. Heinicke put it high and outside where only Seals-Jones could catch it.

This one is unforgivable, sadly. Now, I’m not sure why they got cute and decided to throw on 2nd and 7 with 2:22 left in the game while up by a point. That’s some curious play-calling. However, that does not excuse Heinicke’s decision to put the ball at risk.

Humphries goes in jet motion, and his defender follows him. That should cue to Heinicke that the Giants are most likely in man coverage. McLaurin is aligned in a reduced split on the right side to the short side of the field. He runs a rub route on the linebacker, which frees up an almost guaranteed completion to Antonio Gibson coming out of the backfield on a swing.

Instead, Heinicke makes a terrible decision and forces a pass to McLaurin, who is drifting downfield after avoiding contact with the linebacker. Bradberry proves why he’s one of the top cornerbacks in the NFL as he jumps it for an interception.

Can Washington lean on Heinicke as their QB for 2021?

Washington can survive with Heinicke. Yet, they can’t ask him to continuously put up 30+ points. And he probably won’t be able to bring them back from any significant deficits.

No, Washington’s vaunted defense has to start playing better. By they, I mean the pass-rush duo that claimed they wanted to break the sack record.

Heinicke can manage a game. He can drive the bus. He’s an outstanding backup quarterback who can spot start when necessary. What he doesn’t do is stop Washington from trying to do everything in their power to find their franchise QB in the offseason.

The team also seems to respond to him, and the coaching staff obviously trusts him. Heinicke’s 35.8 QBR in the contest feels dirty. He played better than that on Thursday Night Football. I think even when (if) Fitzpatrick returns, this is Heinicke’s job for the rest of 2021.

Because at the end of the day, Washington has to look at the Los Angeles Chargers and wonder, “What if?”