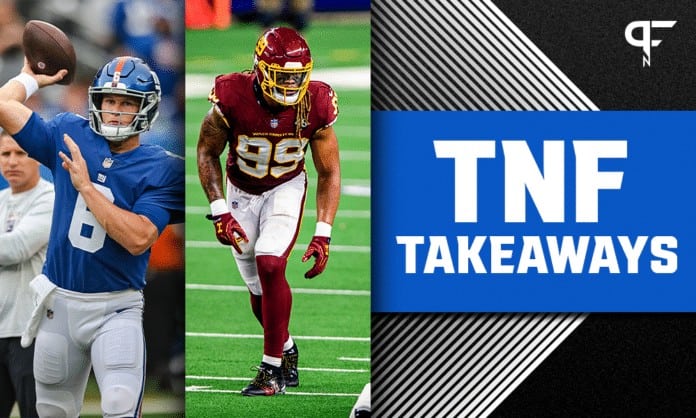 Giants vs. Washington did not disappoint on Thursday Night Football, but it was the Washington Football Team that left with the victory.

The Giants vs. Washington Thursday Night Football game had it all. Dropped wide-open touchdown passes, star players shining, others dimming, and, like any instant classic, a wild ending. So, what were the key observations from the New York Giants and Washington Football Team divisional bout?

Observations from the Giants vs. Washington game

Curses may not be real, but how else would you explain the Giants?

The Giants are cursed

In a game that featured five lead changes, including three in the final quarter, Washington technically beat New York 30-29.

But the truth is, the Giants beat themselves.

A series of disastrous plays doomed the Giants: a dropped touchdown pass, a touchdown run overturned by a questionable holding call, and, most damaging, an offsides penalty in what should have been the final play of the game.

WFT kicker Dustin Hopkins pushed a 48-yard field goal, and the Giants thought they survived. But Dexter Lawrence was in the neutral zone, giving Hopkins a second chance.

He made the most of it, sending through a 43-yarder to drive the stake into New York’s heart.

Yet, that wasn’t the only time New York shot themselves in the foot. Darius Slayton dropped a sure touchdown, and Giants offensive coordinator Jason Garrett did not take a shot at the end zone when they had the ball inside the 20 with two minutes left on the clock.

New York’s decision to settle for a field goal cost them big time.

Taylor Heinicke came up big in the biggest moments

The Washington Football Team has something in Taylor Heinicke.

He’s not always pretty. But he’s effective — and fearless.

That is a BOLD play call 😱#NYGvsWAS

Heinicke’s accuracy Thursday, to put it kindly, wasn’t great. His late pick was nearly fatal. Even his completions were often off-target. But when he was good, he was absolutely great.

Making just his third NFL start with Ryan Fitzpatrick out for weeks due to a hip injury, Heinicke led WFT on two different drives that put Washington ahead in the final five minutes.

First, he needed just two throws to take Washington 75 yards for a go-ahead touchdown midway through the fourth quarter. Then, he ground out enough yards to give Hopkins a chance to win it.

It was the best Heinicke looked all night, even if his stat line suggests he was elite the entire game. In truth, Heinicke came out wild. Many of his passes sailed, and he only got on track when Washington started targeting James Bradberry, who was left on an island during their first touchdown drive.

Bradberry had trouble with Terry McLaurin for much of the night, including in the fourth quarter, when he was forced to hold the dynamic receiver on third down. Bradberry did pick off Heinicke late, but instead of changing the game’s outcome, it simply set up more drama.

We might have seen the best of what Daniel Jones has to offer Thursday night — particularly in the second half.

The New York Giants’ embattled third-year quarterback was impactful early with his legs and late with his arm in the Giants’ loss.

Jones should have had the most dynamic scoring play of the game, rumbling 58 yards for a would-be touchdown in the first half. However, the score was negated very late in the run by a dubious holding call on C.J. Board.

That was the extent of New York’s explosive offensive plays early on, but after the break, Jones really got it going.

He led the Giants on five straight scoring drives, not including a half-ending kneel down. He moved the chains against relentless pressure and dropped a beautiful 33-yard touchdown pass into Darius Slayton’s breadbasket.

Jones finished the night 22-of-32 for 249 yards and a touchdown. He also rushed for 95 yards on 9 carries, as Garrett dialed up read options with success.

But Jones deserved even better. Both Kenny Golladay and Slayton dropped deep passes, including a would-be touchdown to Slayton on a totally blown WFT coverage in the fourth quarter. Still, the pass should have been better, considering how wide-open Slayton was.

From the very first snap, Chase Young, Jonathan Allen, Montez Sweat, and Daron Payne were in the offensive backfield. Jones deserves credit for hanging in there, especially after Allen suplexed him for a sack in the first half.

Washington’s defense finished with 4 sacks and a bunch of negative plays. One of those dynamic plays took points off the board. Young abused OT Nate Solder on a third-down sack in the first quarter, knocking the Giants out of field goal range.

But New York’s much-maligned o-line got its act together after halftime, providing Jones enough time to make his progressions and find the open receiver.

Saquon Barkley is still causing all kinds of heartburn for fantasy football managers. After a 10-carry 2021 debut, the Giants running back had 15 touches for 69 yards and no touchdowns in his second game back from reconstructive knee surgery.

Barkley got off to a great start, busting loose on a 41-yard run on the Giants’ second possession. Nevertheless, an early workload was not predictive of what was to come. He was not effective when he got the rock. After that long run, his next 7 carries netted 0 yards.

Kenny Golladay not earning his paycheck

The Giants are paying Kenny Golladay like a No. 1 receiver. But he’s been a distant second to Sterling Shepard through two weeks.

After catching 4 balls for 64 yards in the opener, Golladay finished with 3 receptions for 38 yards on 8 targets — a stat line depressed by a couple of ugly third-quarter drops. That’s not what the Giants had in mind when they gave him a four-year, $72 million deal in free agency.

On the other hand, Shepard finished with 9 catches for 94 yards — despite making a few million less per year than Golladay, whom NFL Network cameras caught screaming at Jones on the sidelines after a failed late drive.