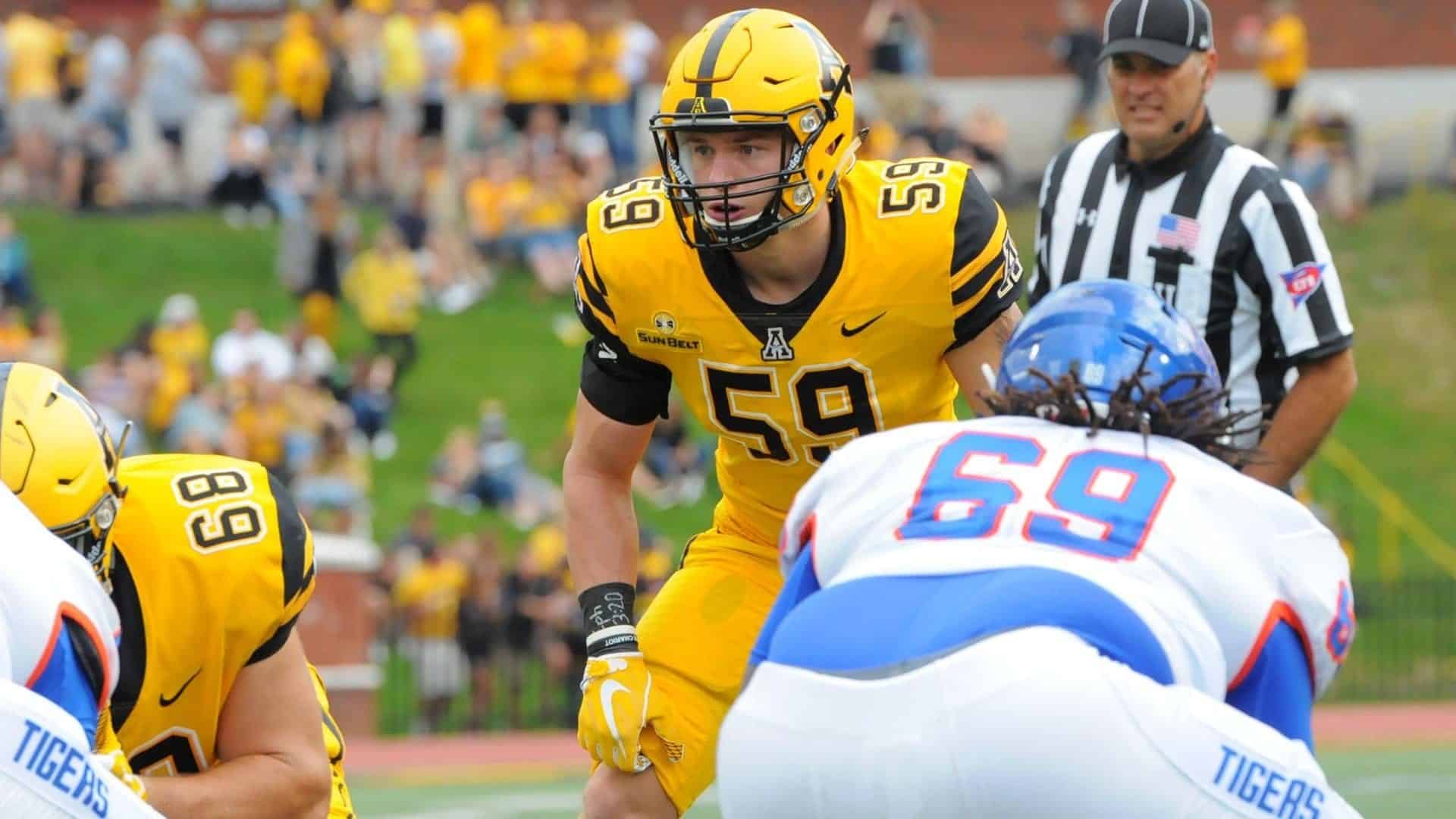 Saturday’s matchup between the Appalachian State Mountaineers (3-0) and the Coastal Carolina Chanticleers (3-1) will feature two formidable heavyweights battling for supremacy in the Sun Belt Conference. Though both teams are on a three-game winning streaks, Appalachian State enters the contest as heavy favorites.

In what figures to be a high-scoring affair, there are four defensive players (and a running back) that should be on NFL Draft radars within the next couple of months.

I’ve highlighted players from both schools that figure to impact Saturday’s conference clash, effectively boosting their draft stock for the upcoming 2020 NFL Draft.

After spending his freshman year at Presbyterian College in 2017, Marable wasted little time making an impact at his new school last season, and was named Coastal Carolina’s Offensive Player of the Year in 2018. Marable rushed for 731 yards on just 118 carries, finding the end zone six times. He also added 15 receptions for 180 yards and two scores through the air.

A 2019 Phil Steele Preseason Sun Belt All-Conference third team selection, the versatile tailback is off to a dashing start to his junior campaign.

Through four games, Marable has 406 yards and four touchdowns on 76 carries. With 157 receiving yards to his name, he is already positioned to surpass his 2018 totals — perhaps as early as this week.

Though merely a junior, Marable is likely to draw some NFL appeal by season’s end. He’s currently on pace to lead the Sun Belt Conference in rushing, and his rapidly developing receiving skills and special teams ability will entice teams at the next level.

At 5-foot-10, 190 pounds, Marable will need to add 8-10 pounds to his frame to garner significant draft buzz, but the talent is there to mold him into a versatile threat out of the backfield.

Johnson has taken somewhat of an irregular path to playing time.

For one, he was a highly coveted defensive lineman coming out of high school. He ultimately chose to attend Clemson over a slew of other schools looking to acquire his services.

After redshirting as a freshman in 2015, Johnson played sparingly for the Tigers as a redshirt freshman the following season. In three games, he registered 5 tackles in 46 snaps.

He played in eight games in 2017, this time racking up 9 tackles and 2 sacks. His first collegiate sack came against Louisville — and his second came in the ACC Championship game against the University of Miami.

The 6-foot-4, 280-pound interior pass rusher instantly became a team captain in his first season at Coastal Carolina, tallying 24 tackles, 5 tackles for loss, 3 sacks, and a blocked field goal attempt in his first extended action at the collegiate level.

He has 16 tackles and 1.5 sacks in four games for the Chanticleers this season.

At 280 pounds, Johnson is considered to be severely undersized for an NFL defensive tackle. He’ll likely need to add 15 pounds to his frame in order to pique interest from NFL teams — or He could ultimately end up staying pat, and transitioning to defensive end at the next level. As it stands, Johnson is projected to be a late round pick in the 2020 NFL Draft.

Claybourne is no stranger to adversity.

He’d spent his first two seasons at Lackawanna College in Pennsylvania and received a medical redshirt in his first season at Coastal Carolina, after missing the final seven games of the 2017 season. It wasn’t until the 2018 season that his luck began to turn.

Named to the 2019 Phil Steele Preseason Sun Belt All-Conference fourth team going into his final season, expectations were high for the Chanticleers’ defensive leader. He’s responded with 22 tackles and a pass breakup through four games.

At 5-foot-11, 195 pounds, Claybourne fits the mold of a nickel cornerback at the next level. His quick-twitch ability, change of direction, and versatility will warrant attention from scouts at Coastal Carolina’s pro day — but some may look at his lack of game experience and label him as a project. I have Claybourne graded as a priority free agent, with a chance to elevate himself into late-round consideration.

Fehr acts as the heartbeat of one of the Sun Belt’s top defensive units. As the middle linebacker, he essentially is.

Named to the preseason watchlist for the Bronco Nagurski Award, an award given to the top defender in the country, the standout linebacker is coming off a season in which he amassed 86 tackles and 5.5 sacks.

He currently has 28 tackles and a fumble recovery heading into Saturday’s Sun Belt showdown.

At 6-foot-3, 230 pounds, Fehr is considered to be vastly undersized for an NFL middle linebacker. Teams will likely be looking to mold him into a sideline-to-sideline weakside linebacker at the next level. The transition would benefit Fehr greatly, as it keeps him clear of offensive lineman, allowing his tantalizing athleticism to make plays all over the field.

After spending his first two seasons a role player on defense and special teams maven, Davis-Gaither burst onto the national scene as a junior.

The rangy outside linebacker accounted for a team-leading 105 tackles, 1.5 sacks, 7 pass breakups, and 2 forced fumbles last season, earning second-team All-Conference honors for his efforts. He finished the season tied for 8th nationally among non-defensive backs, with an astounding 8 pass breakups.

Davis-Gaither wasted little time proving that last year was no fluke, racking up 22 tackles, a sack, 2 pass breakups and an interception through three games.

While he may not fit the mold of a traditional downhill thumper at 6-foot-2, 215 pounds, Davis-Gaither’s coverage acumen, range, and athleticism should translate rather seamlessly to today’s NFL. In an era where spread offenses and passing attacks rank supreme, players like Davis-Gaither have never been in higher demand.

Like Fehr, the undersized linebacker is making an early case for a Senior Bowl bid. If he can continue his upward trajectory, it’s conceivable to think that he’ll hear his name called in the mid-rounds of the 2020 NFL Draft.