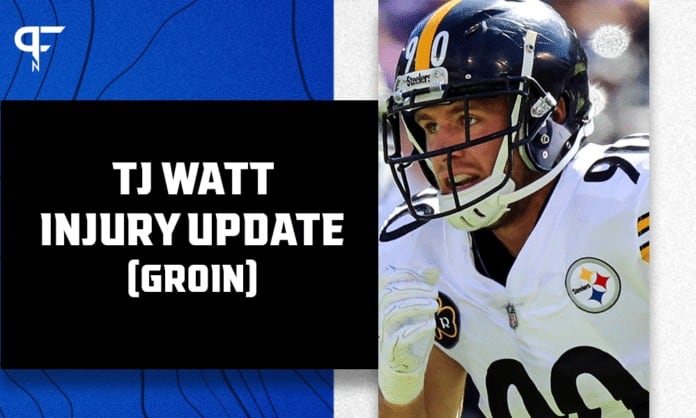 T.J. Watt left the Pittsburgh Steelers game against the Las Vegas Raiders with a groin injury. He has been ruled out and will not return.

T.J. Watt left the Steelers game against the Las Vegas Raiders with a groin injury, and he has been announced as out for the rest of the contest. T.J. has been far less injury-prone throughout his career than his older brother, J.J. Watt. This current groin injury does not seem dissimilar from his only other injury on record. When could the Steelers have him back?

T.J. Watt out with a groin injury

Watt already had a sack, a QB hit, and a forced fumble on his résumé for the day prior to his injury. He was having a day against rookie right tackle Alex Leatherwood, who struggled with Watt’s explosion off the edge.

Watt already had 3 sacks on the year and was generally wreaking havoc on opposing offensive lines through less than five quarters of football.

Things didn’t go as smoothly on defense in the Steelers’ last defensive drive. The Raiders were able to take 6:23 off the clock as part of a 13-play drive to end the half. Still, Pittsburgh held Las Vegas to a field goal.

However, Watt signed a record-breaking deal for a reason — the Steelers need the star pass rusher. By making nearly $28 million per year, Watt took over as the highest-paid defensive player of all time.

Pittsburgh lost two cornerbacks in free agency, putting more pressure on the pass rush to elevate the defense. They signed Melvin Ingram, who was very good in Week 1. They also have Cameron Heyward, who is one of the best pure technicians in the league at defensive tackle. But being able to generate pressure from multiple spots is imperative to the Steelers’ defensive success.

There is minimal injury history that should concern fans. Only another groin injury all the way back in 2017 pops up. In that instance, Watt missed only one game. That is the only missed game of his NFL career so far.