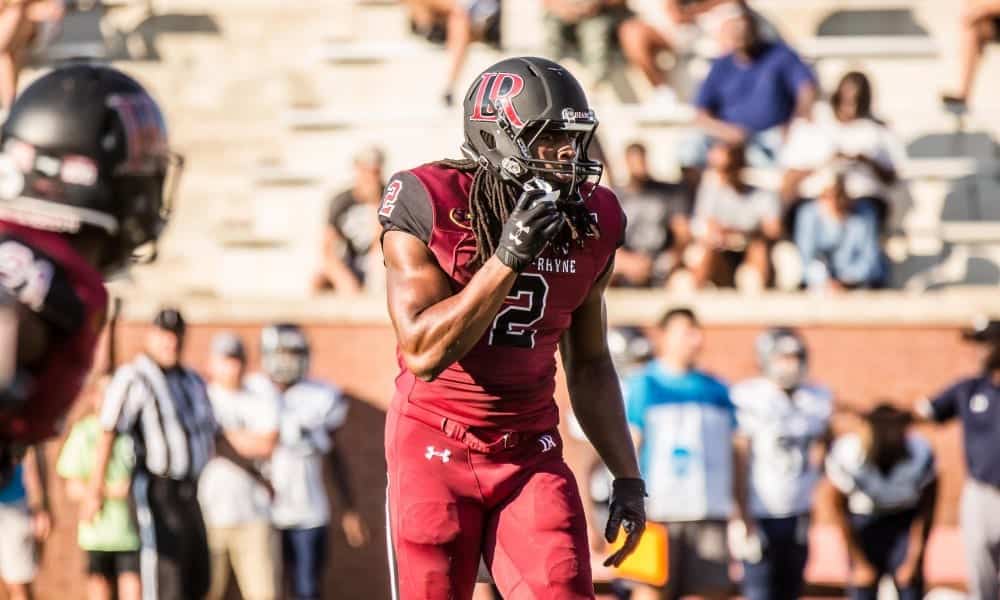 Heading into last year’s college football season, not only was LSU safety Grant Delpit the highest-rated draft-eligible player at the position for the 2020 Draft, but he was also one of the highest regarded prospects overall. His 2018 tape was elite, and he seemed destined to be a top-10 selection in April’s draft. However, Delpit wasn’t very good in 2019. NFL scouts have expressed concern with his inability to tackle. We saw similar concerns surrounding Delpit’s teammate Greedy Williams in the 2019 Draft, which ultimately led to his draft-day fall. Unfortunately, Delpit could face a similar fate. While Delpit’s draft stock seems to be on the decline, there is still a lot of promise for the 2020 safety class, led by a group of small school prospects.

Before we take a look at the group of small school safety prospects who are seeing their draft stock soar, let’s take a look at the “big three” when it comes to the 2020 safety group. The group consists of the above mentioned Delpit, Minnesota’s Antoine Winfield Jr, and Alabama’s Xavier McKinney. Due to a poor 2019 campaign for Delpit, that left room for another safety from the SEC to become the draft community’s highest-rated player at the position. That player is McKinney, and he is the only safety that is certain to be a first-round selection in the 2020 Draft.

McKinney has the range to play single-high safety and has the versatility to be an enforcer against the run. The flavor of the month is Winfield Jr., who possesses outrageous versatility and insane ball skills. These three players are all very good prospects, but are there better values at the position in the 2020 Draft? If an NFL team wants to get their hands on one of the three top-players at the position, they have two options.

The first is to pony up a top-40 selection to get one of them. This is just an old-fashioned case of supply and demand. The second option is to bank on finding a better value in late-round two or the early-round three range. It just so happens that there is, in fact, a group of small school safety prospects that could have tremendous value.

If you would have heard the name Jeremy Chinn a few months ago, not many would have known who he was. Today, he is the hottest prospects eligible for the 2020 NFL Draft. At the NFL Scouting Combine, Chinn displayed a marvelous athletic profile, led by an impressive 41-inch vertical jump and a jaw-dropping 4.46 40-yard dash. He was also a top performer in the 2020 Reese’s Senior Bowl in Mobile, Alabama. On top of all of that, Chinn was the biggest safety at the combine, possessing size that is reminiscent of former Seattle Seahawks’ Pro Bowl standout Kam Chancellor.

In addition to his impressive size and length, one of Chinn’s best traits is his tantalizing ball skills. He secured 13 interceptions during his collegiate career. Another attractive quality for Chinn is his physicality, which allows him to bring down ball carriers with ease. The combination of size and explosiveness that Chinn brings to the table is rare. More strengths in Chinn’s game include his extraordinary fluidity, unparalleled athleticism, and his ability to lay the lumber.

In the clip below, you will get a glimpse of the speed, burst, and play-making ability that Chinn brings to the table:

If he played at Alabama or LSU, he would be a sure-fire first-round selection, but since he played his college ball at a small Division 1-AA school, he is likely to be around late in round two of the draft. For some lucky NFL team, this small-school draft prospect will pay huge dividends.

Like Chinn, Kyle Dugger was remarkable at the NFL Scouting Combine and the Senior Bowl. In Indianapolis at the combine, Dugger posted an impressive 42-inch vertical, which was the best of all defensive backs in attendance. His 4.50 40-yard dash is adequate, but he plays much faster on tape. In his career at Lenoir-Rhyne, Dugger accounted for 237 tackles, 10 interceptions, 36 passes defended, six forced fumbles, six fumble recoveries, and six punt return touchdowns. To say that Dugger makes plays would be quite the understatement.

His versatility and athleticism were on full display at the Senior Bowl. His best trait is his physicality, allowing him to excel in run support. He is literally a do-it-all safety that possesses the ability to hit, cover, and make game-changing plays.

When you watch Dugger’s tape, you will notice under-the-radar ball skills. The clip below will showcase that, as well as Dugger’s ability to play center field:

When the dust settles, Dugger should be a mid-second round draft pick. Keep an eye on teams such as the Cleveland Browns and Tampa Bay Buccaneers, as both have expressed interest in the small school prospect.

SMU safety Rodney Clemons might not be in the same class as Chinn or Dugger, but he is certainly another small school draft prospect falling under the radar. Clemons, a four-year starter for the Mustangs, posted 204 tackles, 27 passes defended, two sacks, and seven interceptions during his college career. At the NFL Combine, Clemons ran an unimpressive 4.71 40-yard dash, but this is one of those cases where it’s better to trust the tape than the stopwatch.

Clemons is a great athlete, as he was a star on the basketball court in high school before he ever stepped foot on a football field. His biggest strengths are his ball skills, ability to contribute in run support, and his leadership. He was named a team captain in 2019 for the Mustangs. He isn’t the best athlete and struggles with his tight hips, but that doesn’t stop him from being a very productive player.

If Clemons isn’t on your radar, you better get him on there fast. He is going to be a steal on the third day of the 2020 Draft.