Should you move on from Zeke Elliott in fantasy leagues?

With Zeke Elliott about to enter his fifth year in the NFL, what value does he hold for fantasy owners in dynasty leagues?

Since arriving in the NFL as a 21-year old, Ezekiel Elliott has been one of the most reliable backs for fantasy football owners, be that redraft or dynasty leagues. Zeke has finished among the top 10 running backs in fantasy points in all four seasons he has been in the NFL, including 2017 when he played in just ten games. The key for Elliott has always been about volume, having had over 350 touches in three of his four seasons.

However, with Elliott having now accumulated over 1,150 carries and 1,350 touches, the hits are starting to rack up for the Dallas Cowboys lead-back. It is hard to quibble with a player that has finished in the top 20, but when you start to dig into the numbers, a potential downturn in fortunes looms in the future. Let’s take a look at the numbers behind Elliott’s recent performances, both his and the area that makes a running back tick, the offensive line.

When you look at his fantasy point totals for the past four seasons, the idea that Elliott’s performances are simply average may cause you to do a double-take. In non-PPR leagues, Elliott is averaging over 15 points per game, and in PPR formats, that number jumps over 20 points per game.

In the last four years, he has scored double-digit touchdowns twice and nine touchdowns in each of the other two years. Additionally, he has topped 1,000 rushing yards in three seasons, including rushing for 1,357 yards in 2019, and was only prevented doing it in 2017 because his season was cut short.

There are the positives laid out plain and simple for all to see, but as usual, not everything in life is positive. Let’s take a look at Elliott’s Fantasy Point Differential (FPD) in each of his four seasons in the league. 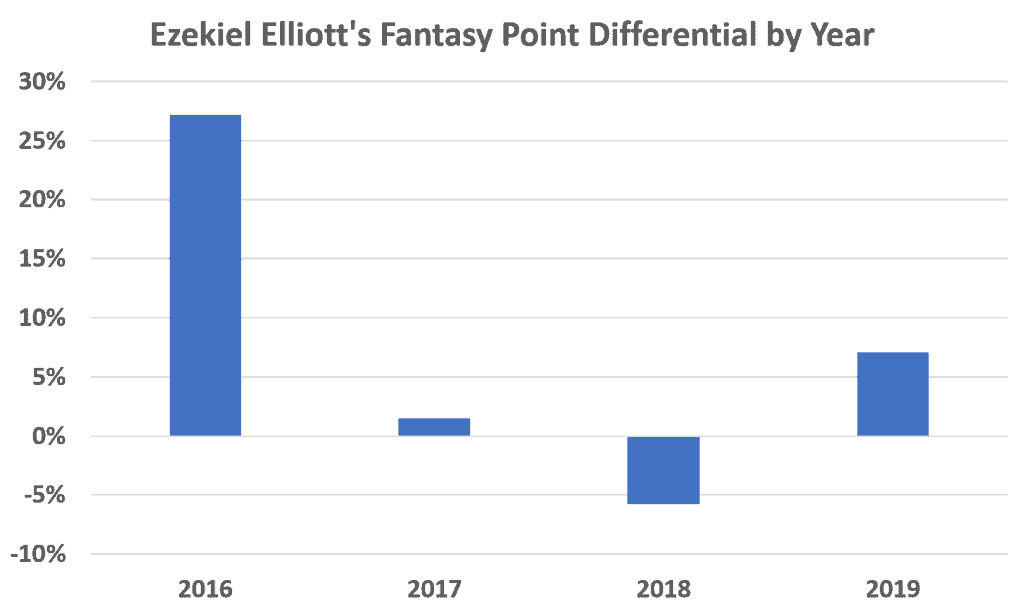 As you can see from the graph above, Elliott has not produced a season where he has excelled against his Expected Fantasy Points since his rookie season. Last season, his FPD of 7% was a promising sign that perhaps 2018 was just a rough year, but there is another aspect to consider. Even so, an FPD of 7% is nothing to shout from the rooftops about, especially when the likes of Aaron Jones, Derrick Henry, Mark Ingram, and Christian McCaffrey all returned an FPD of at least 19.

During these four seasons, Elliott’s offensive line has ranked in the top-four three times. The one year he did not have one of the best four offensive lines? 2018, his only season with a negative FPD. The biggest difference we can observe in his offensive line in 2018 compared to the other three? Joe Looney replaced long-time Cowboys’ center Travis Frederick while Frederick battled Guillain-Barré syndrome. Well, following Frederick’s retirement during this past offseason, Elliott is facing the prospect of playing with a new center in 2020.

Do we also need to worry about Elliott’s touches?

It may seem crazy to be discussing concerns over a player who had 355 touches and 18.8 carries per game in 2019. However, when we are talking about a back who has averaged over 20 carries per game in his first three seasons, it is worth noting. Elliott also had the second-lowest numbers of his career in terms of yards per attempt (4.5) and yards per touch (5.0).

It is especially worth noting that threat to his carries when his backup performed admirably when given the opportunity last season. Playing in 15 of the Cowboys 16 games, Tony Pollard racked up 101 touches and 86 carries, averaging 5.3 yards per attempt and 5.6 yards per touch. Both of those numbers were superior to Elliott’s and reflected in Pollard’s FPD of 12%.

With Elliott on a long-term deal, that has significant guaranteed money remaining in the next two years, it would seem logical that we continue to see Elliott’s touches remain relatively low on a per-game basis compared to earlier in his career.

Does that make Elliott a player to sell?

Elliott is still a very good player and there should be no doubt about that. Additionally, despite his per-game numbers being down somewhat last season, his 301 carries still rank fifth in the NFL overall in the last four years. While I would expect Elliott’s numbers to drop a little more in 2020, to expect him to suddenly see less than 250 carries next season is unrealistic. Elliott is still going to be a very good back and is worthy of RB1 consideration right now.

The concern comes in whether a player who has performed distinctly average in the past three seasons, now has a new piece in the center of his offensive line, and performed below average the last time he had a different center, is still worthy of top-five consideration in dynasty leagues. That is his current price in a start-up draft and is where he is generally valued by most analysts. Therefore, you should not be selling Elliott for pennies on the dollar, but there is the potential for a deal to be made.

Elliott is entering his fifth year in the NFL, and for running backs, the second-contract years are when we can see an immediate drop-off, which was demonstrated by the superb work of Luke Neuendorf on Twitter. In the graphs contained in the tweet below, we can see that running back production peaks in the fourth year of their career, before dropping off gradually through years five through seven, with a rapid decline from the eighth year onwards.

Part 2 – Player Longevity
To nobody’s surprise, QB is king in this department.

I took the top 24 POSITIONAL finishes from 2000-2019, leading to a sample of 480 players at each position. Then, I graphed the number of top 24 finishes verse age, resulting in the graphs below: pic.twitter.com/R7J09wtLBY

Therefore, given what we have seen above and his performances over the last three years, now might be the time to get ahead of the gun with Elliott. If you could turn Elliott into a young back such as Josh Jacobs or Miles Sanders, combined with a young receiver such as Jalen Reagor, Michael Gallup, or Justin Jefferson, it is possible to remain competitive in the short-term while also turning resources and attention to the future as well.

Lynn Bowden Fantasy Outlook: Should you start or sit him in Week 15?

Is Kareem Hunt playing today vs. the Ravens?

Lynn Bowden Fantasy Outlook: Should you start or sit him in Week 15?