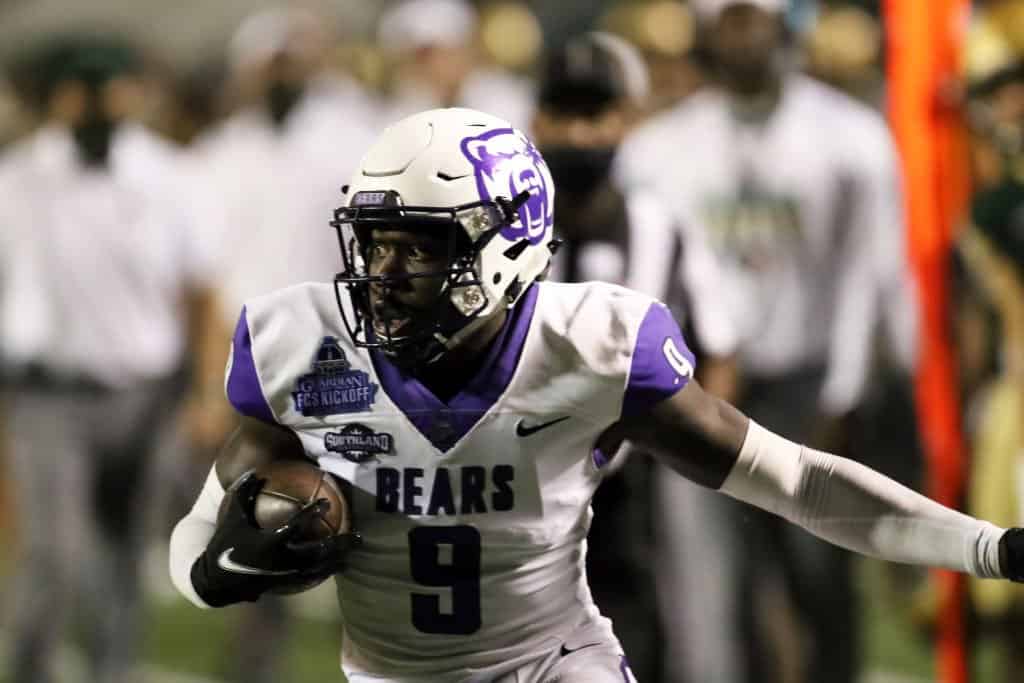 The 2020 season is obviously a different type of season. Major conferences are delaying their starts, games are being pushed back on a weekly basis, and teams are not fielding full squads due to the issues at hand — yet the scouting process moves forward. The weekly college football schedule has been a fraction of what it usually is, and that will be reflected in this week’s NFL draft stock risers and sliders column.

ASU went into Kansas State as decided underdogs — but like a number of teams from the Sun Belt Conference, they came out victorious. Adams helped lead the way, as the big-bodied receiver finished the day with eight receptions for 98 yards and three touchdowns. Adams manhandled a talented Kansas State secondary that lines up several draftable prospects.

The senior has terrific size and times much faster than he plays. He also possesses solid hands, and if Adams builds on his K-State performance, there’s a good chance his name could be called in the late rounds of the draft.

Baker was another Sun Belt receiver who impressed despite South Alabama suffering a heartbreaking loss as they broke in its new stadium. Baker, who is graded as a priority free agent by several scouts, totaled seven receptions for 129 yards and one TD, averaging 18.4 yards per catch.

Baker has the physical skills to play at the next level, but as I said during my South Alabama writeup, he needs to be more consistent on the field. Saturday was a good start for the senior.

Fitzpatrick makes it a trifecta of receivers whose NFL draft stock is on the rise after his performance against Western Kentucky. And while Fitzpatrick will be facing tougher competition later this season, one must consider where he was a year ago.

Fitzpatrick watched his play regress after a dominant freshman campaign, and there were rumors he was entering the 2020 NFL Draft. Fitzpatrick made the right decision and returned for his senior campaign, and he caught four passes for 110 yards and one score, including a 70-yard strike, in the season opener. There’s still a lot of season left, but if Fitzpatrick is able to build on this performance and remind scouts of his brilliance from 2017, he’s destined to be selected in the 2021 NFL Draft.

Few, if any, had Sims on the scouting radar before the season began, but that quickly changed after Saturday. The Michigan transfer, who was a backup a year ago, had a great performance during the Yellow Jackets’ victory over Florida State. He tallied five tackles and broke up two passes, several of which came during the game’s critical moments and against the Seminoles’ top receiver, Tamorrion Terry. Only a redshirt sophomore, Sims has the size, tenacity and seemingly the ball skills to play at the next level and potentially develop into an early pick.

With so few FCS/I-AA schools playing this fall, it’s going to be difficult to find a small-school prospect to highlight each week in our NFL Draft Stock Report. Despite that, this one was easy. Though he’s slightly built, Rochell is a sensational athlete with a developing game. He’s displayed solid ball skills throughout his career and also has potential as a return specialist.

His stat line this season is nothing outstanding after two games, as Rochell has three tackles and one forced fumble with no pass breakups or interceptions. Then again, opponents refuse to throw his way, so Rochell is not seeing the ball much. Rochell was graded by scouts as a late-round pick entering the season, but recent whispers say he could end up on Day 2 of the 2021 NFL Draft.

Many have graded Purdy as a potential early-round pick, but I went against the grain this summer and stamped Purdy as a sixth-round prospect who plays sandlot football, and that’s exactly what I saw during the Cyclones’ loss to Louisiana. Purdy completed just 16 of 35 passes for 145 yards and never got the ISU offense moving. And while Purdy can be an electrifying signal caller on the college field, his talents and lack of arm strength don’t translate well to the next level.