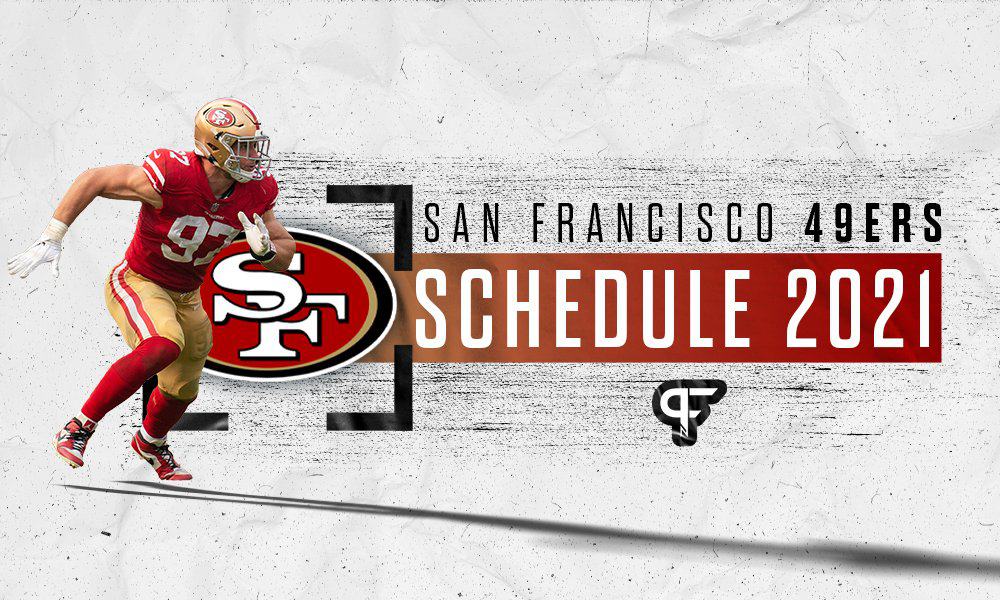 What is the San Francisco 49ers’ 2021 NFL schedule, how many primetime games do they play, and who are the toughest and easiest opponents on their schedule this season?

With the weakest projected schedule according to Vegas win totals, could the 49ers be set for a good season in 2021? The storyline all year for the 49ers will revolve around the QB situation, but could their schedule see them get right back in the playoff race in 2021?

The 49ers will play four games on their 2021 schedule against teams projected to win 10 or more games. Three of those games will come at home, with two of the four being against the Los Angeles Rams.

The good news for the 49ers is that in the past two years they are 4-0 against the Rams. Kyle Shanahan appears to have Sean McVay’s number, which could be crucial given these two teams are projected to be fighting for the NFC West crown in 2021.

The other two games see the 49ers host the Green Bay Packers and the Indianapolis Colts. The game against the Colts cannot be overlooked. The Colts have won the last four games between the two franchises, but they have not played each other since 2017. Therefore, the form book is really out the window. What this game has the potential to present is two QBs in Jimmy Garoppolo and Carson Wentz fighting for their NFL career. That certainly could make for an intriguing matchup.

The Packers’ game is intriguing given the situation surrounding Aaron Rodgers. San Francisco had comprehensively beaten the Packers twice in the 2019 season by a combined 74 points to 28. However, Green Bay got revenge against a Nick Mullens-led 49ers’ team last season. This matchup will also see Shanahan take on one of his disciples in Matt LaFleur.

The 49ers’ 2021 schedule sees them play seven games against teams projected to win seven games or fewer. Five of those games will be on the road against the Detroit Lions, Chicago Bears, Jacksonville Jaguars, Philadelphia Eagles, and Cincinnati Bengals.

That combination of games will see three new head coaches and two others potentially fighting to save their job. In addition, the 49ers could find themselves facing two rookie QBs in Trevor Lawrence and Justin Fields, as well as two second-year QBs in Jalen Hurts and Joe Burrow.

Meanwhile, the two home games see the Atlanta Falcons and Houston Texans head into San Francisco. That is another two new head coaches the 49ers will face in the 2021 season. These seven games present an incredible opportunity for the 49ers to go 7-0 and lay down a really solid base for their run at the NFC West.

In the last two years, we have seen the 49ers in the Super Bowl followed by a last-place finish in the NFC West. The strength of the 49ers’ 2021 schedule gives them a very real opportunity to produce a season similar to their 13-3 showing in 2019.

As always, the NFC West will provide a stern test, but the 49ers have the talent to succeed. The Vegas projected win totals suggest the 49ers are set for a big season, but can they ignore the media distraction and bring it all together this season?