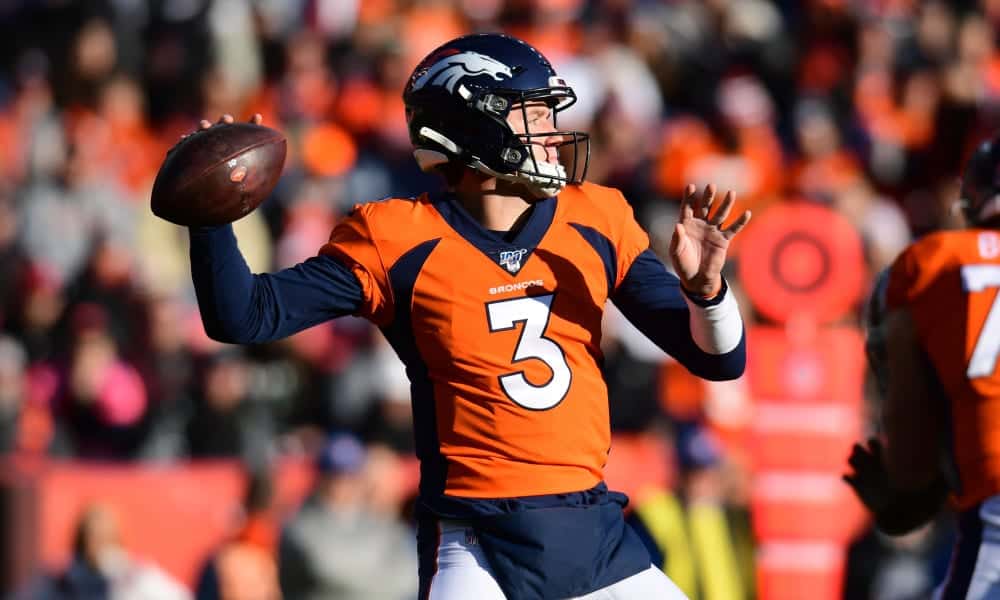 The Denver Broncos enter the 2020 season with a position room of quarterbacks that give the team the best collection of talent they’ve had at the position since Peyton Manning retired at the end of their Super Bowl-winning 2015 campaign. That said, what should the Broncos and general manager John Elway expect from their young quarterback room in 2020?

The hype is quickly building throughout Broncos Country in regards to second-year Broncos quarterback Drew Lock.

Thanks to Elway’s offseason overhaul of the Broncos offense, the national media has started to take notice. Analysts like Colin Cowherd have proclaimed Lock as, “this year’s ‘pop guy'” and has argued the Broncos’ roster is talented enough to compete with the Kansas City Chiefs for the AFC West crown.

That’s a lot to ask of a 23-year-old kid who has played a mere five games in the National Football League up until now and wasn’t even able to practice for a considerable part of his rookie season in the league.

However, Lock is more than up to the challenge. The confidence level and swagger he possesses were palpable even last season, not only in his own play but in the play of his teammates as well. From the moment he entered the starting lineup, the Broncos had a different aura about them as they rallied behind the inexperienced quarterback, and the numbers reflect just that.

Before Lock entered the lineup, the Broncos were 3-8, averaging an ugly 15.9 points per game and scoring more than 20 points in just 27.3% of their outings. They had crossed the mark of 175 passing yards just five times (45.5%), their quarterbacks had been sacked an average of 3.3 times per game and had a collective touchdown-to-interception ratio of 9:7. Denver was also converting just 27.7% of their third-down attempts, good for the worst rate in the league.

Once Lock entered the lineup, those numbers improved drastically across the board. The Broncos went 4-1 down the stretch, scored 5.5 more points a game. They also scored more than 20 points and eclipsed 175 passing yards in 60% of their games, as Lock was sacked a total of five times (one per game) and posted a touchdown-to-interception ratio of 7:3. They also became the 14th-best team on third down, converting 41.0% of their tries.

Remember, Lock made all those improvements with a pretty bare cupboard. Behind Pro-Bowl wide receiver Courtland Sutton, the Broncos’ leader in receptions was No. 2 running back Royce Freeman. If you focus exclusively on wide receivers, Emmanuel Sanders finished second on the team in receptions, yards, and touchdowns, despite spending more time in red and gold than he did in orange and blue last year.

Now, working in his favor, Lock has a tantalizing array of weapons that would make any signal-caller salivate like a rabid dog. During free agency, Elway brought in Melvin Gordon to pair with Phillip Lindsay in the backfield and added Graham Glasgow to improve the porous offensive line.

Then, in the draft, Elway doubled-down on cementing the interior of Denver’s line with Lloyd Cushenberry, and gave Lock some pass-catchers in the form of Jerry Jeudy, K.J. Hamler, Albert Okwuegbunam and Tyrie Cleveland.

With Joe Flacco and Brandon Allen headed elsewhere, the Broncos had to invest in another backup quarterback, targeting Jeff Driskel for the job.

Despite being just two seasons removed from college, Driskel is fairly experienced, with eight starts across two seasons and two different teams on his resumé already. However, it is worth mentioning that those eight starts led to a pretty dismal record of 1-7.

Driskel’s other stats from his eight starting performances aren’t that impressive either. Last season, with the Detroit Lions, Driskel posted an even touchdown-to-interception ratio of 1:1 and finished with a passer rating of 75.3, which puts him in the same ballpark as Josh McCown and Devlin “Duck” Hodges.

Elway’s decision to sign Driskel to a two-year five-million-dollar contract to be Lock’s backup seemed like an acceptable one at first but looks much worse now that the dust has settled. If Elway had been more patient to sign a backup, the Broncos 2020 quarterbacks could be an even stronger group than they already are.

Jameis Winston, Colt McCoy, Blaine Gabbert, and Brian Hoyer have all had more impressive careers and all signed for less annually than what the Broncos are paying Driskel. That’s not even taking into account Andy Dalton, who signed for just $500,000 more annually than Driskel, and Cam Newton, who’s still job hunting.

Broncos Country has to hope Lock doesn’t suffer another freak injury this season because if he does, their days of winning are over with Driskel under center.

As far as practice squad quarterbacks are concerned, it’s hard to do much better than Brett Rypien. That’s not to say he’s a stud by any means, but he’s more-than-acceptable for the role of the scout team quarterback.

Although lacking gaudy or even above-average physical traits he finished his college career as the Mountain-West’s all-time leader in yards and completions thanks to his high football IQ. One day, he might develop into an adequate backup to Lock, but for now, it’s best he stays on the practice squad.

In last year’s preseason, his first experience in the NFL, the Boise State product went 27-for-44 for 207 yards, 1 touchdown, and 2 interceptions. If the Broncos are concerned about what this global pandemic could do to their roster, and more importantly their quarterback depth chart, they may want to invest in a better insurance plan, but otherwise, Rypien will do just fine.

Undrafted free agent Riley Neal isn’t on the roster for much more than to compete with Rypien for the scout-team quarterback job, and even in that regard, should be viewed as a sizable underdog.

Neal spent the first four years of his college career at Ball State before transferring to Vanderbilt last season in an effort to improve his NFL candidacy.

That plan didn’t quite work out, as he completed fewer than 60% of his passes and threw for less than 160 yards per game while posting a touchdown-to-interception ratio of 9:5 and taking 19 sacks.

It would be relatively stunning if Neal provides the 2020 Broncos quarterbacks room with anything more than a camp arm.