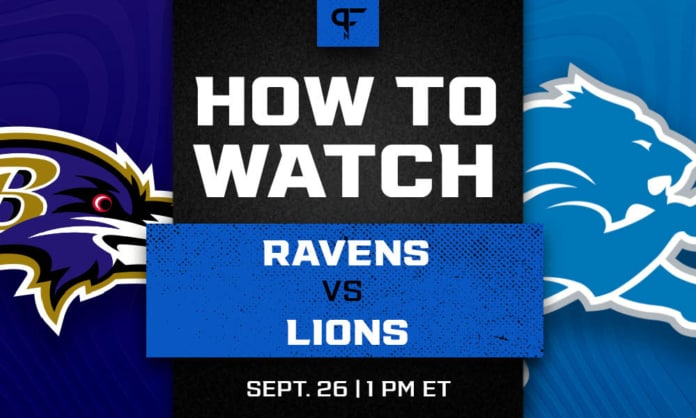 What are the latest lines, odds, and predictions ahead of the Ravens vs. Lions matchup, and on what channel can you watch the game?

Sunday’s Baltimore Ravens vs. Detroit Lions game features two teams coming off primetime matchups. Let’s look at the current lines and NFL odds, a prediction for the game, the TV channel, and how to live stream the Ravens vs. Lions Week 3 NFL game.

Baltimore Ravens vs. Detroit Lions prediction and odds for Week 3

The Ravens need their defense to step up in Week 3

To no one’s surprise, Baltimore’s offense has come out of the gate hot, scoring 63 points through the first two weeks. The club is averaging 443.5 yards per game offensively, with both the passing and running game producing results. This has come despite concerns about their offensive line and injuries to their RB group.

However, Baltimore’s defense has proven to be a major problem. They have allowed a total of 68 points and an average of 448 yards per game. The Ravens have historically fielded strong defenses, but they currently rank in the bottom five in both points and yards allowed.

Things will not necessarily get easier this week against the Lions. Through two weeks, Detroit has averaged 387 yards per game and scored a total of 50 points. Nevertheless, with the Lions expected to be one of the worst teams in the league, the Ravens’ defense will look to get back on track this week.

The Lions will try to upset the odds vs. the Ravens

While little was expected of the Lions this season, they have caused their opponents some cause for concern through the first two weeks. Their comeback in Week 1 had the 49ers worried, and they stayed with the Packers through the first half of Week 2.

But after ultimately losing to Green Bay by 18 points, it is no surprise many predictions have the Lions losing this game vs. the Ravens. Still, Detroit played better in Week 2 than the final score may indicate. The Lions led the Packers in most offensive categories, but turnovers cost them.

Against Lamar Jackson and the Ravens, the Lions cannot afford to hand over extra possessions. They need to control the clock and keep the ball out of Jackson’s hands. If they can do that, they can pressure Baltimore’s offense and force mistakes.

Realistically, a lot has to go right for the Lions if they are to upset the odds this week vs. the Ravens. However, the same could have been said for the Raiders in Week 1 before they upset this same Baltimore squad in an overtime win.

There’s also a chance this could be a letdown spot for Baltimore. This game is sandwiched between a huge home opener against the Chiefs last week and a Week 4 contest at the Denver Broncos. The Ravens could be caught looking ahead to a potential 3-0 opponent in Week 4 and overlook an 0-2 opponent in the Lions.

Yet, if there’s one coach you would trust to ensure that doesn’t happen, it would be John Harbaugh. The long-time Ravens coach is a master at getting his team to focus, and he knows a loss this week could leave Baltimore staring down the barrel of a 1-3 start. The Ravens should be too much for the Lions to handle, but this game might be closer than the lines and odds suggest, at least through the first half or so.

How to watch Ravens vs. Lions this week