T.J. Watt and Bud Dupree may have created the most dominant defensive duo in the sport. With the help of RAS, we can see why.

By Nicholas McGee
September 25, 2020
What's in this article? Click to show
Watt & Dupree shine in pre-draft testing
Watt gets off the line of scrimmage quickly
Dupree wins inside and out
A game-changing play gives Pittsburgh the edge

T.J. Watt and Bud Dupree each recorded elite Relative Athletic Scores (RAS) coming into the NFL. The Pittsburgh Steelers’ willingness to bet on their athleticism continues to be vindicated, with the edge-rushing duo key to an excellent start to the season. Watt is one of the league’s premier edge rushers and has been worthy of Defensive Player of the Year consideration for each of the past two seasons, while Dupree was franchise tagged by the Steelers in the offseason after a breakout 2019 that saw him record 11.5 sacks.

They have each picked up where they left off to start the 2020 campaign, combining for 27 pressures through two games, per CBS Sports; Dupree having the slight edge in that department with 14 to Watt’s 13. Their ability to wreak havoc up front has been crucial for the Steelers. The athletic traits that were evident when they each came out of college allow a defense that was arguably the best in the NFL in 2019 to excel again and provide a foundation from which Pittsburgh hopes to build a Super Bowl run. 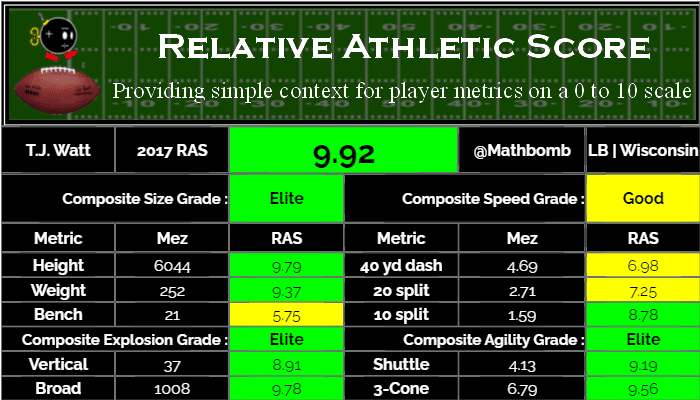 The Steelers selected Watt with the 30th overall pick in 2017 after receiving a RAS of 9.92 out of 10 for his efforts at that year’s Combine. Watt earned elite composite grades for his size, explosion, and agility.

While he fell short of receiving an elite composite grade for his performance in the 40-yard dash, his 10-yard split of 1.59 seconds reflected the short-area burst the former Wisconsin Badger has at his disposal.

Related | Steelers’ T.J. Watt one of the top edge rushers in PFN’s 2020 rankings

Dupree went 22nd overall to the Steelers in 2015 after athletic showings at the Combine and his pro day that resulted in his RAS of 9.47. 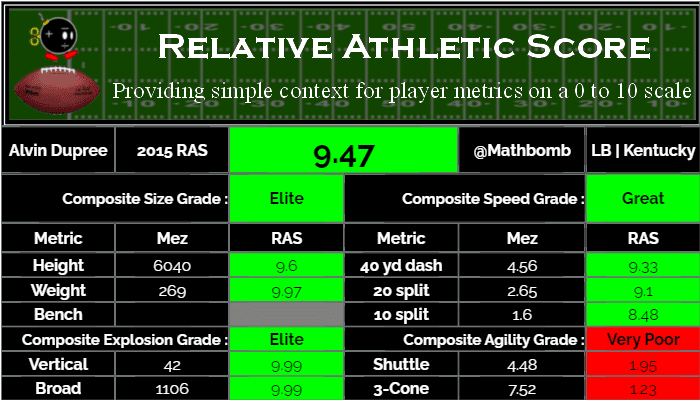 He did not impress in the drills that measure agility. Still, Dupree finished his two workouts with elite composite grades for his size and explosion and outperformed Watt’s display two years earlier with an excellent composite speed grade.

Their incredible athleticism has shone through in the opening two weeks of the season, with the Denver Broncos the latest team to struggle to contain the dynamic pass-rushing pair.

Watt gets off the line of scrimmage quickly

Watt had 2.5 sacks against the Broncos after being shut out against the New York Giants. His half sack was split with star defensive lineman Cameron Heyward, with Watt displaying his flexibility to bend around the edge and drag Jeff Driskel down despite a failed attempt at a rip move.

The same burst and bend were evident late in the second quarter as Watt succeeded with the rip move to get to Driskel again, taking advantage of short-setting right tackle Elijah Wilkinson to record the sack.

Short-area speed and lower-body flexibility are traits Watt relies on heavily to succeed. He supplements them with excellent hand-usage, which is something Dupree also uses consistently to disrupt the passing game.

Dupree wins inside and out

Dupree doesn’t have the same level of bend as Watt but overcame that on a critical pressure on third down with the Broncos in the red zone in the third quarter. He displayed quickness in his hands to beat Garett Bolles – despite the disadvantage of having a wider path to the quarterback – to force Driskel into a backfoot off-target throw to Melvin Gordon.

The burst Dupree boasts also allows him to win to the inside. He did that on several occasions versus Denver, displaying power in his hands alongside his speed to shove guard Dalton Risner to one side on a deep incompletion from Driskel in the second quarter.

Risner was later on the receiving end of more impressive work from Dupree, who utilized the swipe move to pressure Driskel and force an incomplete downfield throw from the Broncos backup.

As their respective RAS performances indicated, Dupree is a little more of a straight-line athlete and must find different ways to win as a result. However, throughout last season and in the early part of this year, he and Watt have each been devastatingly effective, and, as Drew Lock found out to his detriment, they are a nightmare to deal with when working in tandem.

Driskel was called into action following a sack and forced fumble by Dupree on which Lock suffered a sprained AC joint that will keep him out for several weeks.

Related | Pittsburgh Steelers: T.J. Watt is the next legendary defender

Dupree, who ran a stunt with Heyward, made use of his incredible closing speed to knock the ball free after Watt had dipped around the edge to cause the initial pressure and force Lock from the pocket.

Watt and Dupree had a decisive impact on the Steelers’ victory over the Broncos as they combined to make Denver turn to an inferior quarterback who – despite his best efforts – was not able to inspire a late comeback.

The way they have started the season suggests they will have a critical influence on other games this campaign, with the Steelers’ contrasting strategies as to how they build their offense and defense paying dividends.

Pittsburgh has not valued athleticism highly on offense, as evidenced by their selection of wide receiver Diontae Johnson in the third round last year, but it is clearly something they look for in their pass-rushing linebackers.

The Steelers bet on both Watt and Dupree converting their physical gifts into consistent production. It took a little longer for Dupree to reward their faith in him, but Pittsburgh now has two edge rushers who have the athleticism and the pass rush moves to create constant chaos in opposing backfields and make life much easier for the Steelers’ talented secondary.

Pittsburgh’s primary challenge in the AFC is likely to come from one quarterback in Patrick Mahomes, who is rapidly becoming the king of the comeback, and another in Lamar Jackson, who is adept at negating pressure with his dual-threat skill set.

However, with Ben Roethlisberger healthy, the Steelers have an offense capable of keeping pace with the attacks of the Kansas City Chiefs and the Baltimore Ravens.

As long as Pittsburgh keeps piling on the points and Watt and Dupree make game-changing plays, the Steelers will have the formula to return to supremacy in the AFC. They owe much of that to their decision to hitch their wagon to the tremendous athletic traits of their star pass rushers.