Steelers WR Diontae Johnson might not have the most outstanding athletic tools, but he's still a realistic break out candidate.

Pittsburgh Steelers WR Diontae Johnson did not test like a player capable of enjoying a successful NFL career. However, after an extremely encouraging rookie campaign, he enters the 2020 season ready for a breakout year. Despite Johnson’s lackluster testing, the Steelers did not hesitate to select him with the 66th overall pick in the third round.

That decision is on the way to being vindicated following a rookie year that saw Johnson finish with 680 yards and five touchdowns on 59 receptions, along with another score on a punt return.

With Pittsburgh set for a major upgrade at the quarterback position in 2020, there is little reason why Johnson cannot make the leap and become a key contributor for a team many expect to contend for a deep run in the postseason. 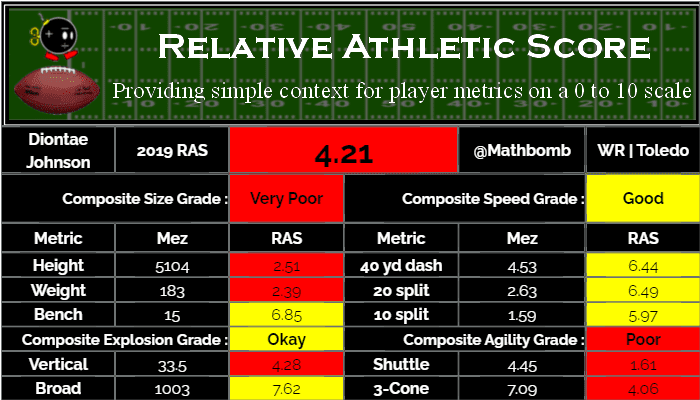 Johnson received a poor Relative Athletic Score (RAS) of 4.21 out of 10 for his efforts across the combine and his Pro Day last year.

Measuring as an undersized receiver, he was underwhelming in the agility drills and did not perform much better in the areas of the workout that test explosiveness.

The former Toledo wideout fared best in the 40-yard dash and the burst he demonstrated over the first 10 yards of that drill has translated to the field.

Johnson’s ability to surge off the line was evident on his final touchdown of the 2019 season, which came in a Week 16 loss to the New York Jets.

He was the quickest Steelers receiver in reacting to the snap and showed the acceleration to gain significant separation from a flat-footed cornerback, giving Johnson the simple task of hauling in a perfect deep ball from Mason Rudolph.

Though Johnson is clearly quick enough to beat corners downfield, he did not rely on his speed to excel as a rookie. Instead, he leaned on route-running skills that appear extremely refined for a player of his inexperience.

Johnson is an astute route-runner

Johnson averaged 11.5 yards per reception as a rookie, with that impressive number owing largely to his intelligent approach to his routes, which shone through on a 30-yard reception from the Steelers’ win over the Los Angeles Rams.

Working against Troy Hill, Johnson showed the sink in his hips to gear down as he broke infield, his quickness in doing so creating separation from Hill that he maximized by astutely shuffling towards the sideline before catching the ball to give him extra room to pick up yardage after the catch.

The same awareness evident on that play was apparent on this 11-yard third-down reception from the Week 15 loss to the Buffalo Bills, as Johnson recognized the need to work back to the ball after fighting off physical coverage from Levi Wallace.

Arguably the best play of Johnson’s rookie season came later in that same game when Johnson married neat footwork with excellent hand usage to beat All-Pro corner Tre’Davious White, who was then on the receiving end of a vicious stiff arm after an agile move in the open field from the Steelers receiver.

Though Johnson committed a fumble the Steelers recovered at the end of the play, that 29-yard reception demonstrated upside in earning yardage after the catch that was not entirely reflected by the numbers.

Upside after the catch

Johnson finished the 2019 season averaging 5.1 yards after catch per reception, according to the NFL’s Next Gen Stats, well adrift of league-leading rookies A.J. Brown (8.8) and Deebo Samuel (8.5).

Related: The top 25 wide receivers in the NFL

Yet Johnson displayed the elusiveness in the open field to suggest he can be among the NFL’s best in that area of the game, using moves that belied his poor performance in the agility drills to make defenders miss.

He put such moves on two members of one of the NFL’s top defenses in the Week 3 loss to the San Francisco 49ers, Johnson evading both Richard Sherman and Jaquiski Tartt on a third-down play to get to the sticks and keep the drive alive.

Minus Ben Roethlisberger, the Steelers offense could not do enough to secure postseason football for Pittsburgh even with a strong first season from their third-round pick.

But with Roethlisberger back in the fold and Juju Smith-Schuster also back healthy for the 2020 campaign, Pittsburgh’s passing game is one that is expected to take off again.

Key to their success in doing that will be Roethlisberger’s rapport with Johnson. Roethlisberger obviously cannot lean solely on Smith-Schuster and, while they did not have enough time to establish a connection last year, what Johnson put on tape while the six-time Pro Bowler was on the sideline suggests the Steelers quarterback should have already have plenty of trust in his potential number two target.

In his route-running and his promise after the catch, Johnson has so far shone in the two areas in which it is necessary to excel if a receiver is going overcome athletic shortcomings and enjoy a successful NFL career.

He now belatedly gets the chance to play with a quarterback blessed with the experience and the skill set to help him take that next step. Johnson’s testing numbers were far from elite but, in 2020, he is perfectly positioned to play a crucial part in the Steelers’ return to the upper echelon of the NFL.