Is Matthew Stafford playing tonight vs. the Cardinals?

The Pittsburgh Steelers went 8-8 in 2019, but can they build on a strong finish and outperform the sportsbooks' projected season win total for them in 2020?

After losing quarterback Ben Roethlisberger in Week 2 of the 2019 season, finishing with an 8-8 record should be considered a successful year for the Steelers. With Roethlisberger returning under center this season, the Steelers will have a great shot to top their projected win total in 2020.

The talent on the Steelers in undeniable, and after two straight seasons without playoff football, the entire organization will be desperate to get back where they believe they belong. However, with a tough AFC North that contains three teams that may very well be hitting the upward part of their success curve in 2020, the Steelers will need that talent they have across the board to step up in the big moments.

In this article, we will break down their offseason moves and examine whether the Steelers have a shot to win nine or more games for the sixth time in the last seven years.

It was a relatively quiet offseason for the Steelers as they return many of their starters from 2019. The biggest additions came in the form of four big men at tight end, left guard, full back, and defensive tackle. The Steelers will be looking for Eric Ebron to provide them with veteran consistency and become a dominant threat in the red zone.

Stefen Wisnewski should step in as an immediate starter at left tackle, with Derek Watt replacing longtime fullback Roosevelt Nix. They will hopefully be able to provide some muscle to an offense that ranked in the bottom-10 in both the run and pass game. On the defensive side of the ball, the Steelers traded a fifth-round pick for former Baltimore Ravens defensive tackle Chris Wormley. Wormley will come into a defensive line that ranked third in the league against the run last season.

The losses for the Steelers are relatively small, as they tied up their biggest potential free agent in Bud Dupree with the franchise tag for 2020. Offensively they have replaced their only two major losses in Ramon Foster and Nix with like-for-like pieces. Defensively, they have done the same with nose tackle Javon Hargrave, whose loss should be covered by the trade for Wormley. The emergence of Devin Bush as a playmaker has allowed the Steelers to let Mark Barron walk this past offseason, in what is arguably the most high-profile name leaving this roster.

The addition of Wormley will be the only real difference in this defense in terms of the starters on Day 1. The Steelers defense was among the best in the league against both the pass and run, while leading the league in turnovers, meaning that major changes were not called for.

The Steelers traded away their first-round pick in the 2020 NFL Draft in return for the arrival of Minkah Fitzpatrick, leaving their draft class looking a little light at first glance. With two years left on his contract, Fitzpatrick essentially gives the Steelers a first-round pick who can contribute immediately as we saw with his five interceptions and two fumble recoveries in 2019.

The Steelers also invested a third-round pick defensively with the acquisition of pass rusher Alex Highsmith. Highsmith is highly unlikely to be an opening day starter in 2020 but should provide depth behind the combination of TJ Watt and Bud Dupree. His superb motor and pass rush skills should allow the Steelers to have a constant threat from the outside regardless of which combination of those three are on the field.

The addition of Ebron should give the Steelers a talented second pair of hands at the position alongside Vance McDonald. However, the biggest offensive addition this year should be the return of long-time quarterback Ben Roethlisberger. After missing the majority of 2019 with an elbow injury, Roethlisberger will be itching to get back on the field in 2020.

The Steelers are known for their ability to uncover wide receiver talent in the draft over the past decade or so. In the second round of the 2020 NFL Draft, they added Notre Dame wide receiver Chase Claypool, who should provide depth behind their talented receiving trio.

In the fourth round, they invested in further depth at the running back position in Anthony McFarland. McFarland scored nine touchdowns and averaged 5.6 yards per touch in his final season at Maryland. He should start 2020 in a depth role but could have an opportunity to make an impact as the season wears on. When he sees the field he has the talent to be an X-factor in the NFL like he was in college. 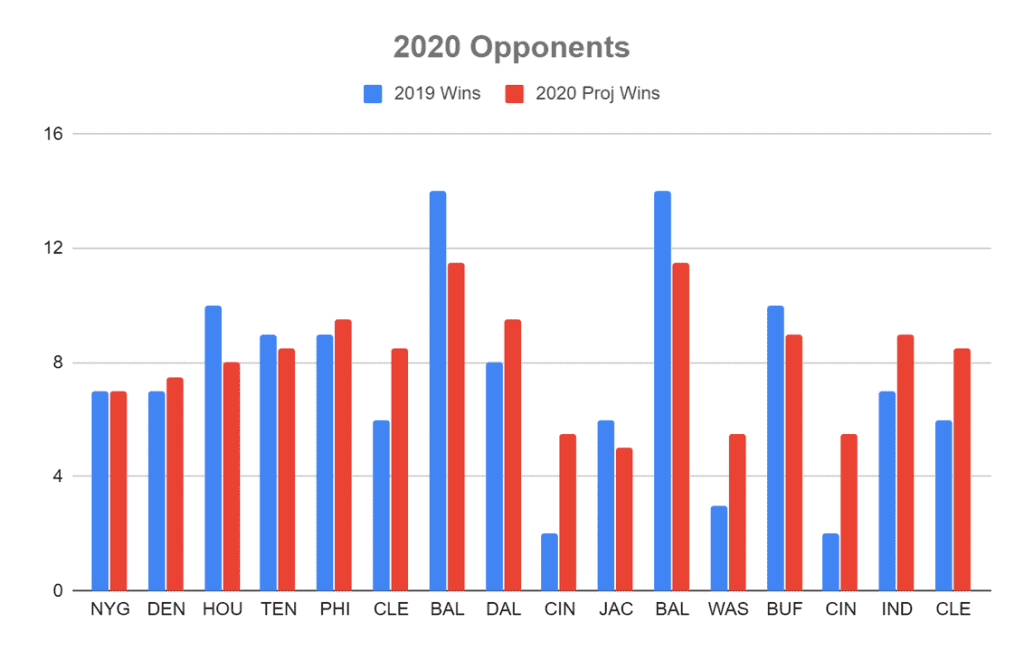 The Steelers have a somewhat mixed schedule in 2020 affecting their season win total. Of their 16 games, 10 will come against teams that won eight or fewer games in 2019. However, some of those teams are expected to improve in 2020, with nine of their opponents projected to win more than eight games in 2020.

Their schedule has a somewhat soft start with a trip to the Giants and then the Broncos at home. However, from Week 3 until their bye in Week 8, the schedule is an arduous task with all six opponents projected to win at least eight games. If they can get through that stretch then the second half of the schedule is somewhat softer, with six of their games coming against opponents that finished under .500 in 2019.

The Steelers schedule is somewhat friendly in that they only have two spots where they are at a disadvantage. However, both of those spots come against the Joe Burrow-led Cincinnati Bengals, who many expect to have another tough year in 2020. While that could make two potentially simple games tougher, it also lessens the blow of the disadvantage of facing a team coming off their bye or when on back-to-back road games.

Meanwhile, the Steelers have two spots on their schedule where they are at an advantage, and they both come against teams that should provide them a serious test. In Week 5, they will get the advantage of facing the Philadelphia Eagles on the second of back-to-back road games for the Eagles. However, that advantage is somewhat negated by the Steelers and Eagles playing in the same state, making this close to a home game for the Eagles.

The other big point of advantage for the Steelers comes against the Dallas Cowboys coming out of their bye week. The Cowboys game finishes off a run of six games against teams projected to win eight or more games in 2020, so having that off the back of a bye should give the Steelers an optimal opportunity to come out of a tough game with a victory.

The Steelers are a fascinating team entering 2020. Coming off the back of an 8-8 season in which they were carried largely by their defense, they have a real chance to make a statement in the AFC North in 2020. My colleague Cole Thompson believes that given the high likelihood that their defense regresses in 2020, they will struggle to even match their win total of eight from last season, projecting them to have a 7-9 record in 2020.

However, while it is true that their record in 2019 was on the back of a stunning and potentially unrepeatable defensive performance, their offense should be able to step up in 2020. Last time we saw Roethlisberger healthy he led the NFL in passing yards for the season with 5,129 in 2018. The fact this team managed to achieve an 8-8 season with the incompetence on offense we saw in 2019 was close to a miracle.

Therefore, while their defense will likely take a step or two further back next season, their offense should be able to step up into the spotlight. Dionte Johnson graded as the 12th best receiver in the league according to Pro Football Network’s Offensive Share Metric, despite playing with bad quarterback play. Having Roethlisberger on the field should also help elevate a running game that had to face stacked boxes plenty in 2019, as teams did not respect the quarterback play.

With expectations of offensive improvements in 2020, nine wins feel like a floor for what the Steelers should achieve. Therefore, with a projected upside on those nine wins in my model, I will lay a unit on the Steelers to top that season win total in 2020.

Is Matthew Stafford playing tonight vs. the Cardinals?