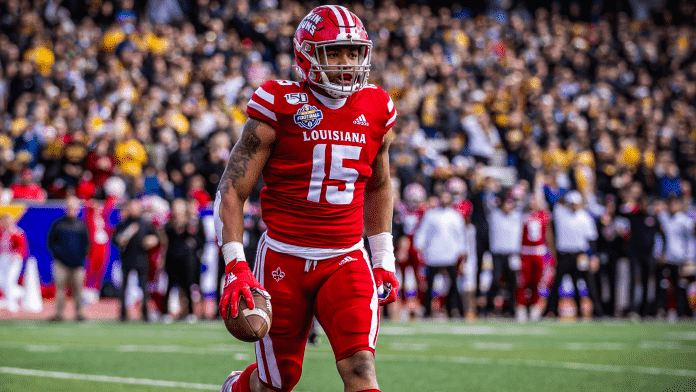 He doesn't get the recongition he deserves, but if he keeps up his level of play, Ragin' Cajun RB Elijah Mitchell will get it soon enough.

Mitchell, who spent the majority of his collegiate career camouflaged in a backfield timeshare, is proving himself to be one of the nation’s premier running backs. With little tread on the tires and a three-down skill set, Mitchell is poised to garner national attention en route to a historic season.

When Elijah Mitchell first arrived on Louisiana-Lafayette’s campus in 2017, the two-star running back was merely an afterthought. Despite rushing for 1,903 yards and 28 touchdowns as a senior in just eight games for Erath High School, Mitchell was hardly in high demand among recruiting circles.

The Louisiana native ultimately decided to remain local and attend the University of Louisiana at Lafayette — just over a half-hour drive from Erath High School.

Although he initially sat behind fellow freshman Trey Ragas and senior Darius Hoggins on the depth chart, Mitchell saw action in five games as a freshman. While he missed the second half of the season with a foot injury, Mitchell finished fifth on the team in rushing yards (273) and tied for third in rushing touchdowns (four).

Mitchell wouldn’t have to wait long for a breakout performance, however. In an early-season tilt with Tulsa, Mitchell carried the ball eight times for 84 yards and a touchdown while adding a 19-yard touchdown reception.

Although he began his collegiate career as a seldom-used reserve, Mitchell climbed the depth chart following a productive spring and fall camp.

Mitchell, who finished second on the Ragin’ Cajuns in carries, started 13 games as a sophomore. The 5-foot-11, 218-pound running back carried the ball 146 times for 985 yards and 13 touchdowns. He also proved to be an effective weapon in the passing game, yielding 20 receptions for 349 yards and three scores.

Three-touchdown outings against South Alabama, Texas State, and New Mexico were the catalyst behind Mitchell’s team-leading 16 touchdowns. The dual-threat runner began to garner attention in the Sun Belt for his unique running style that perfectly blends power and finesse. Due to his squatty build and a punishing running style that incited defenders to relent, Mitchell was rarely impeded by one defender.

After navigating through two injury-plagued seasons, Mitchell proved to the nation what he could accomplish with a clean bill of health. The ascending talent earned 2018 second-team All-Sun Belt Conference honors.

While Mitchell remained entrenched as the lead running back for the Ragin’ Cajuns entering his junior season, he didn’t assume the volume that typically comes with the territory. Instead, Mitchell was part of a three-person backfield that included Ragas, and Raymond Calais.

While each runner brought a diverse skill set to the backfield, Mitchell had no limitations. Whether he wore teams down between the tackles before accelerating to the second level or utilized his speed to turn the corner, teams struggled to contain the third-year running back.

Mitchell played in all 14 games (three starts), accumulating 1,147 rushing yards and 16 touchdowns on 198 carries and ten receptions for 70 yards and a touchdown as a receiver.

For perspective, Calais and Ragas finished the season with 117 and 116 carries, respectively.

Calais may have departed for the professional ranks, but the tandem of Mitchell and Ragas comprises one of the nation’s most talented backfields in 2020.

Mitchell leads the Louisiana-Lafayette rushing attack through two games, registering 24 carries for 210 yards and two touchdowns. It was Mitchell’s 16-carry, 164-yard, two-touchdown performance that propelled the nationally-ranked Ragin’ Cajuns to an overtime victory over Georgia State.

The talented runner doesn’t get the national recognition that his play warrants, but there is little doubt that he is among college football’s elite. If Mitchell continues his upward trajectory and remains injury-free the rest of the way, the nation will have a new name to get acquainted with leading up to the pre-draft process.