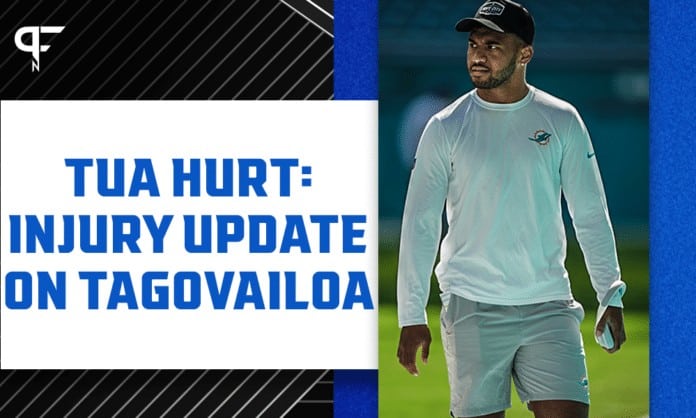 Tua Tagovailoa left the Dolphins-Bills game in the first quarter on a cart with an injury. Veteran quarterback Jacoby Brissett replaced him.

Miami Dolphins quarterback Tua Tagovailoa left Sunday’s Dolphins-Bills game in the first quarter with a rib injury. He was carted into the locker room after taking a hellacious shot from Bills defensive end A.J. Epenesa on a failed fourth-down conversion.

Tua gets hit hard and is injured on the play.

Hoping the #Dolphins QB is OK.

According to NFL Network’s Tom Pelissero, Tua suffered bruised ribs. X-rays were negative, but Pelissero reported he is in a lot of pain and will receive an MRI tomorrow. Jacoby Brissett was Miami’s quarterback for the remainder of the game as Tua remained in the locker room for further evaluation.

Tua got hurt on a failed fourth-down attempt on the Dolphins’ second offensive series. He was looking and throwing right, but right tackle Jesse Davis totally whiffed on Epenesa coming from the edge.

As a result, Tua took a direct shot to the torso during his incomplete pass. He tried to walk off under his own power before falling to his knees, prompting the Dolphins’ medical staff to evaluate him. He ultimately was able to leave the field under his own power but got a ride straight to the locker room.

This is the second injury of Tua’s NFL career and the fourth straight year he’s been hurt. He missed a game in 2020 with a thumb injury the year after dislocating his hip in his final game at Alabama. He also has had surgery on both ankles in the last four years.

Brissett signed a one-year, $5 million contract with the Dolphins in the offseason after spending the previous five seasons with the Patriots and Colts. Entering the game, he had completed 59.6% of his passes for 6,459 yards, 31 touchdowns, and 13 touchdowns.

Brissett, who signed with the Dolphins because he believed he would have a real chance to see the field in 2021, played in Miami’s opener as a short-yardage runner, but the Dolphins’ entire offense, at least for the time being, is now in his hands. He is the only other quarterback on the Dolphins’ active roster.