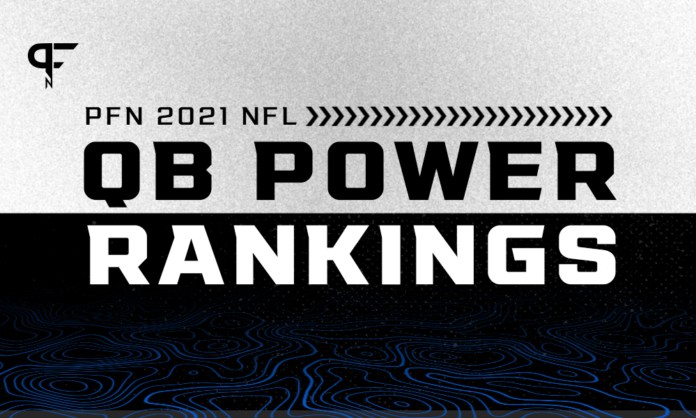 After a spectacular performance, Lamar Jackson plays just okay in Week 6, losing his grip atop the QB Power Rankings. Who replaces him?

Who on the back end finds themselves on the cusp of breaking into the top half?

Teddy Bridgewater has been uncharacteristically inaccurate and loose with the football the last two weeks. Consequently, the Broncos have suffered losses in each contest. The once 3-0 Broncos have now lost three straight, and it’s partly to do with Bridgewater’s erratic play with or without time in the pocket. He hasn’t looked the same since suffering a concussion in Week 4.

Ben Roethlisberger gets a boost in the QB Power Rankings as the Pittsburgh Steelers’ offense appears to be finding its identity. While the team’s newfound mentality puts less weight on the big guy’s shoulders, a run-first game plan allows Roethlisberger to do what he’s doing well right now — completing shorter passes. On Sunday, Big Ben was 19 of 19 on throws of 9 yards or less.

After a week off, Jimmy Garoppolo returns to PFN’s QB Power Rankings. While the quarterback has some injury concerns of his own, the previous starter, Trey Lance, appears to be heading the sidelines for at least a couple of weeks. Sorry 49ers fans. If it’s any consolation, Lance would’ve been ranked lower than 19th.

Hopefully, Bridgewater’s play following a concussion does not indicate what’s to come for Daniel Jones. Because Jones looked nothing like the quarterback I saw in Weeks 1-4. One week after stumbling to the sideline, Jones looked dazed and confused against the Rams’ defense. I’m no team doctor, but another week off would have served him well.

For as well as the defending Super Bowl champions played Thursday night, Jalen Hurts kept the Eagles in the game. Despite continued woes in the passing game, Hurts more than makes up for those inconsistencies with his athletic nature. He’s the only quarterback in NFL history to gain 30+ yards on the ground in each of his first 10 starts.

First off, the drops killed Sam Darnold’s stat line. However, even if you count all 7 of them as caught, Darnold still would’ve completed fewer than 60% of his throws on Sunday. All of a sudden, Darnold’s first read isn’t there, and he’s getting happy feet. It seems like forever since we were talking so highly of him.

With that said, the Lions’ struggles are not all because of Goff. But it’s no coincidence either. The guy has never been a winner. He’s always been a complementary game manager. The Lions are not good enough to allow him to thrive within that role.

With each passing week, Trevor Lawrence furthers his standing among the QB Power Rankings. Slowly but surely, he’s refined himself as an NFL passer. During Sunday’s win, Lawrence showcased elite arm talent with deep-ball placement and tight-window throws on the move. Not to mention, he’s improved his decision-making, leading to fewer turnovers.

I can’t say enough about Mac Jones’ poise and professionalism. After throwing a dreadful interception against the Dallas Cowboys, he targeted that very same defensive back on the ensuing drive for a long touchdown pass. Most youngsters would lose confidence. Jones let it go. Still, the Patriots continue to lose football games, as is the case for most first-year quarterback-led teams in 2021.

Tua Tagovailoa returned to the starting lineup and completed over 70% of his throws for more than 300 yards, 2 touchdowns, and 1 (ugly) interception. With that sort of production against a lowly Jaguars team, you’d assumed the Dolphins handed their upstate rivals their 21st straight loss. But that wasn’t the case because the Dolphins have graver concerns than Tua.

Time may be up for Taylor Heinicke, as journeyman Ryan Fitzpatrick nears his return to the practice field. Every quarterback that’s faced the Kansas City Chiefs’ defense has prospered. However, Heinicke led the Washington Football Team offense to 13 points. At this point, Heinicke has been way too inconsistent to warrant playing over Fitzpatrick.

While Matt Ryan rose during the bye week, Jameis Winston dropped. If he doesn’t go off against a bad Seahawks defense with no Russell Wilson to save them, I’ll consider dropping him further — especially if he continues giving up red-zone snaps to Taysom Hill.

First of all, Geno Smith is no Russell Wilson. If it wasn’t obvious by now, the Seahawks are a terrible team who are only relevant because Wilson is under center. With that said, Smith was admirable in his first start in a long time. Despite being heavily pressured, he led the offense back from a 14-point deficit in prime time to force overtime. But instead of completing the comeback, he fumbled it away.

Justin Fields set career highs in completions, attempts, and rushing yards on Sunday as the first-year signal-caller let it rip — albeit in spurts. Still, the numbers weren’t all that impressive as the Chicago Bears lost another game. I know he’s been under a lot of pressure behind his offensive line, but he leaves the pocket too early and too often.

Of all the quarterbacks who were on a bye in Week 6, none deserved the time off as much as Zach Wilson. During that time, I hope the rookie was sharpening his mechanics, watching game film, and then rewatching the game film. To say there’s a lot of room for improvement is an understatement.

Davis Mills returns to the QB Power Rankings cellar after another subpar performance. To put up only 3 points in nearly 35 minutes of possessing the football — just a week after playing lights out against the Patriots — is embarrassing. I know we expected the Houston Texans to be bad. But Sunday was as bad as it gets for Mills and company.