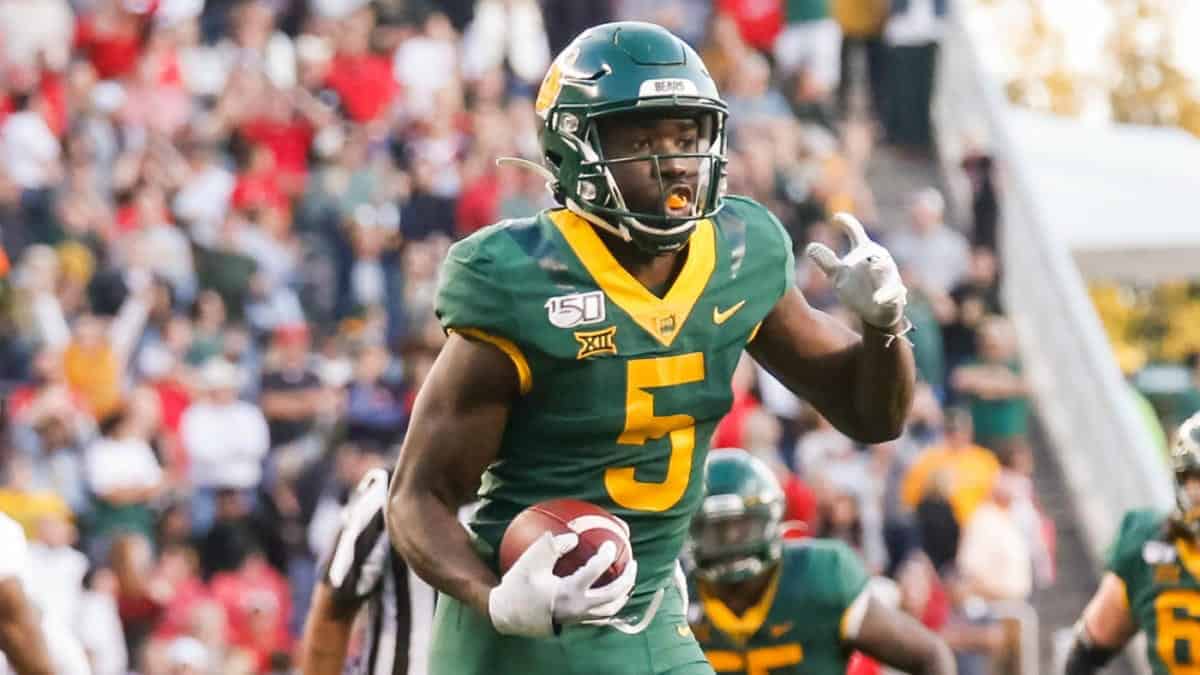 For Eagles fans, a heartbreaking end to the season only amplified the holes of the roster; holes that severely limited the team’s ceiling. Speed on the perimeter, competent play from the back seven, and depth across the roster all needed addressing heading into the offseason.

Frankly, executive vice president and general manager Howie Roseman has done a tremendous job. Acquiring Darius Slay, Javon Hargrave, and Nickell Robey-Coleman boosted a defense that struggled away from home last year. Doing so without giving up major assets or incredulous amounts of cap space is even more impressive. It is easy to see the improvements that have been made, but what else can be done? Let’s take a look at this Philadelphia Eagles 7-round NFL mock draft.

On the offensive side of the ball, Carson Wentz leads a unit that struggled mightily at times last year. Miles Sanders emerged as a bright spot, but inconsistent offensive line play and sickening receiver play tanked any serious chances this team had at competing. The best tight end duo in the league is back again, and a fresh bill of health could help the receiving corps, but that doesn’t mean Philadelphia should ignore this phase of the game come the draft.

Depth across the offensive line is of greater importance after the departures of Jason Peters and Halapoulivaati Vaitai. A lack of athleticism on the outside has been detrimental to the Eagles’ passing attack, in both physical performance and schematic diversity. Giving more weapons to Doug Pederson can have a massive residual effect on the offense.

The departures of Malcolm Jenkins, Nigel Bradham, and Ronald Darby are surely sad to see, but Eagles fans are likely to appreciate the recent upswing in talent. Cornerback remains a need, but to a much lower degree than one might have presumed earlier in the offseason. Philadelphia won’t have the chance to acquire blue-chip pass-rushing talent without a trade, so they will likely settle for rotational edge rushers if deemed necessary. Linebacker and safety remain rather large voids on the depth chart, as free agent departures weakened an already-damaged cast of characters.

Subsequently, it makes sense to separate these needs into tiers, where they can be interchangeable, yet still provide some semblance of order. Tier one needs are paramount to be addressed, tier two needs demand consideration, and tier three needs would appreciate the upgrade, but don’t require the attention of the prior tiers.

Denzel Mims had quality tape before his combine-driven rise to the first-round conversation, but his athletic numbers are incredible and only support his stock. With Philadelphia’s need for speed on the perimeter, Mims’ 4.38 40-yard dash time fits right in. He is explosive and agile enough to continue developing upon his route tree. At the catch point, it is criminal not to point out his innate ability to make a highlight grab. After Alshon Jeffery’s regression and JJ Arcega-Whiteside’s less than impressive rookie year, Mims can step right in on the outside and help the Eagles’ offense.

Furthermore, Mims can make an impact at any level of the field as a result of his athleticism and route-running skills. He is a playmaker who can draw safety attention to open up other facets of the offense. Mims may seem like just another name in this stacked wide receiver class, but his fit in Philadelphia makes a lot of sense, and the athletic upside may be too much to pass on. For these reasons, I selected Mims over Justin Jefferson, Jeff Gladney, and Jalen Reagor.

If it were up to me, Ashytn Davis would not be available at 53. He is easily a top-40 prospect and arguably the best safety in this class. While the Eagles’ roster lost its strong safety, rather than its free safety, neither were spectacular last season. Both spots can use improvement. Davis is primarily a single-high safety but has the intangibles and versatility to make an impact in multiple ways. He is excellent in both man and zone coverage, and won’t back down against the run. His ability to take adequate angles and pursue ball carriers towards the sidelines is impressive. Additionally, Davis is a ballhawk who can create turnovers at the next level.

The safety position is one of need for Philadelphia, but acquiring the best player available is more profitable than reaching for a need. Davis may not be a perfect fit as long as Rodney McLeod is around, but it is a selection sure to pay off, even if its dividends are not immediate. The remodeling of the Eagles secondary can continue here with a player they are lucky to see fall. The best player available, Davis, was chosen over the likes of Zack Baun, Logan Wilson, and Matt Hennessy.

Cameron Dantzler is a somewhat polarizing prospect as his testing would make his success at the next level an outlier. However, he still has his fair share of supporters, like PFN’s own Nick Farabaugh, who broke down the Dantzler risk recently. Dantzler can play the run well and dominate receivers with poor release skills. He’s a feisty defensive back who can force turnovers and optimize his strength both on and off the line of scrimmage. Put him on the outside with Slay, while Robey-Coleman patrols the slot, and you instantly have one of the better cornerback groups the league has to offer. He is aggressive and plays with a high motor, something that many cornerback prospects cannot say. This intangible feature may put him over the top. Therefore, he is the pick at 103 rather than Rashard Lawrence, Jordyn Brooks, or AJ Dillon.

Although his stock has fallen significantly since the apex of his hype pre-Senior Bowl, Nick Harris is still worthy of a selection, especially as late as the fourth round. He is quick and versatile in what you can ask him to do, as he succeeds as a puller and zone blocker. He is not elite in any facet of his blocking, but his technique is proper and his footwork is even better, compensating for poor natural strength. He can still finish and is a smart player overall, so most long term concerns are not death sentences. With Jason Kelce’s age and regression, it makes sense to look for his replacement. Harris can also see playing time at left guard if asked to play right away. Therefore, Harris makes more sense than prospects like Solomon Kindley, Anthony McFarland, and Hunter Bryant.

Khaleke Hudson is far from an elite linebacker prospect, but his athleticism and versatility could be tremendous for a defense that struggled over the middle of the field last year. He can cover better than most linebacker prospects, but there has also been talk of a transition to strong safety as well. Hudson can be trusted as a coverage linebacker in nickel sets on later downs, though his down-to-down consistency as a run defender is not apparent yet. One would like to see his mental processing improve before granting him large shares of playing time, but the Eagles’ situation at off-ball linebacker and strong safety are rather dire at this point. He may already be an upgrade, even if his median projection is not all that high. His ability to be an immediate boost to the defense would help more than Dane Jackson, Anthony Gordon, or Brandon Jones.

One pick later, Philadelphia can once again boost the depth of their offensive line. Losing Peters and Vaitai hurts, but selecting a prospect that can play on both sides of the line can help mitigate those losses. He is not great as a pass blocker or run blocker, but his grip strength and anchor both stand out. He remains malleable and a reasonably-high upside selection, especially this late in the draft. Hakeem Adeniji is worth adding, even if he remains depth for his entire Eagles tenure. I like him over guys like Troy Dye, Anfernee Jennings, and Thaddeus Moss.

Boston Scott made some plays down the stretch but is not built to be the best backup option at running back. Sewo Olonilua can bring a more powerful threat to the run game, with size and physicality to match his speed. Once he gets going, he is tough to bring down. The Colorado back is not great on third down, but Miles Sanders is more than adequate on passing downs. This selection adds another dimension to a run game that already saw some success last year. Thus, Olonilua is the pick over Antonio Gibson, Lavert Hill, or Ben Bredeson.

The final pick of this seven-round mock draft comes from one of the best defenses in the PAC12. Utah’s Julian Blackmon is a versatile asset that has seen snaps as a boundary cornerback, slot cornerback, and free safety. He has shown some chops in coverage, but his tendency to evade contact and play soft certainly hurt his pro projection. He can provide depth at multiple spots and is not a liability in coverage, and after last year, Eagles fans may be grateful for that. His ceiling is not too high, but as a sixth-rounder, he makes more sense than Tanner Muse, Calvin Throckmorton, and Kendall Coleman.