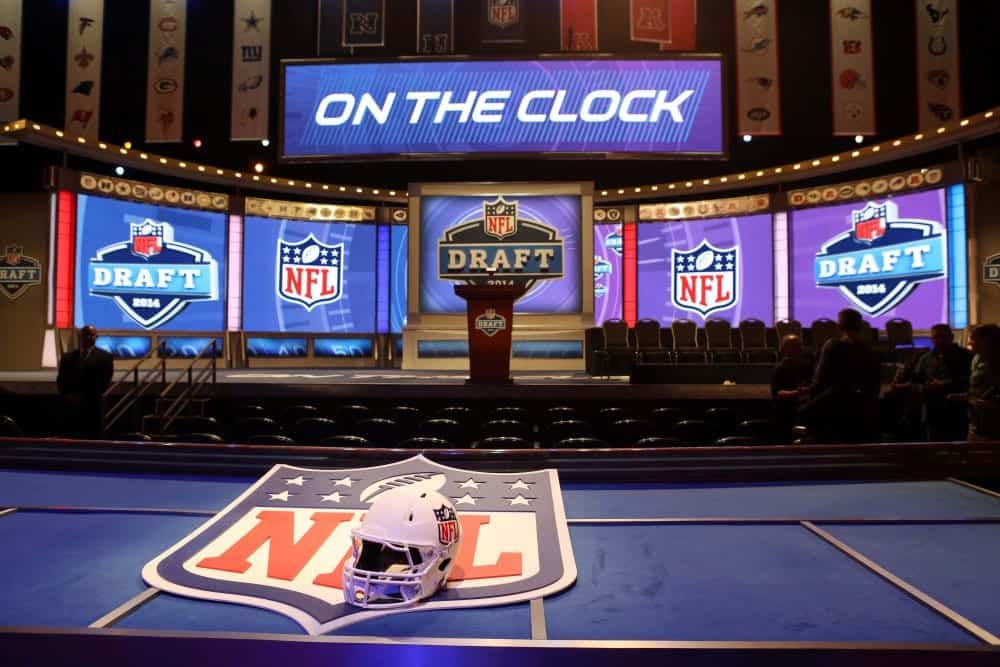 The 2019 NFL season has been arguably one of the worst in recent memory for many teams and their fans. Players who have played at an elite level in prior years have not lived up to expectation, per PFN OSM. Many teams at the bottom of the NFL are patiently waiting for their 2020 NFL draft order to be revealed, hoping to obtain the top prospect playing the most important position in football – quarterback.

On the surface, some teams have appeared to be on the “Tank for Tua” bandwagon. But after suffering a season-ending hip injury last week, it’s assumed Tua Tagovailoa’s stock in the draft has dramatically dropped. Joe Burrow of LSU, currently third in college football passer rating, has taken over as the presumed QB1 in the 2020 NFL draft class.

However, in today’s NFL, some would argue that obtaining the number one quarterback in the draft is not as franchise-changing (or franchise-saving) as it is portrayed to be. Yes, there is always the chance the next QB1 will turn out to be the next Peyton Manning, but stars can be found, and have been found, in later rounds too. Such was the case with Tom Brady, who was selected in the 6th round of the 2000 NFL draft.

Other active quarterbacks, including many league MVPs, have also fared well without the QB1 status. Drew Brees was the second quarterback taken, behind Michael Vick (first overall), in the second round of the 2001 NFL draft. Aaron Rodgers was a late first-round draft pick in 2005, second behind Alex Smith (first overall). Russell Wilson wasn’t selected until the third round in 2012, behind several top prospects including Andrew Luck (first overall). The list goes on.

In fact, over the past 30 years, only two quarterbacks taken first in their draft class (overall or otherwise) have led their teams to Super Bowl victories – Peyton Manning and Eli Manning.

Two also happens to be the number of undrafted quarterbacks to win a Super Bowl– Kurt Warner and Steve Young. So, using PFN OSM, I will try to answer the following question: is it worth taking the first quarterback off the boards in the 2020 NFL draft? Does it really make a difference?

Excluding Cam Newton and Eli Manning, who have only qualified for PFN OSM grades in two games each this season, the weekly average PFN OSM for active quarterbacks taken first in their respective draft classes are shown below. 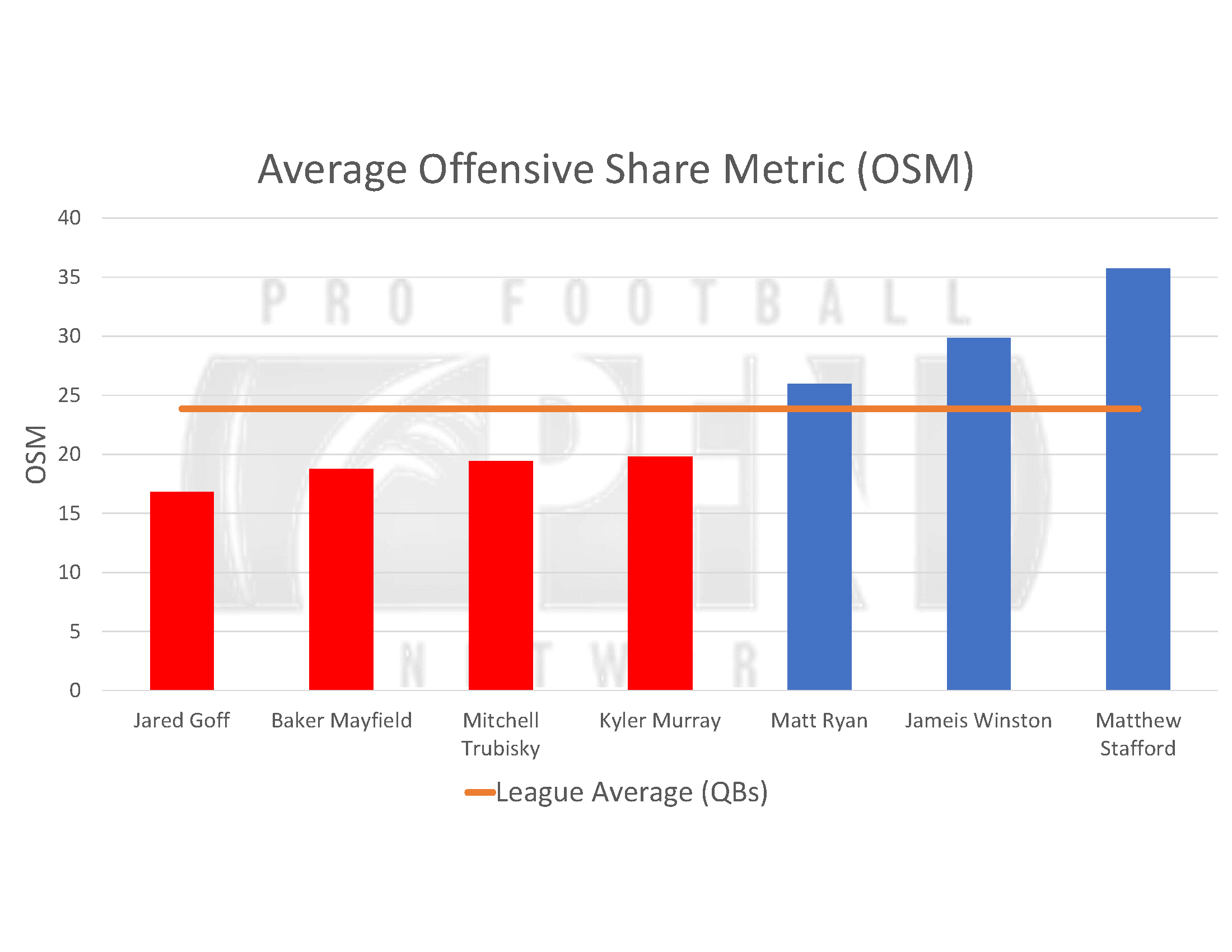 Since PFN OSM is a measurement of an individual’s contributions within a team’s offense, perhaps a team’s tendency to rely on the running game more often would result in a lower PFN OSM. But that is not the case with any of these teams. All of them are passing the ball more often than the league average. 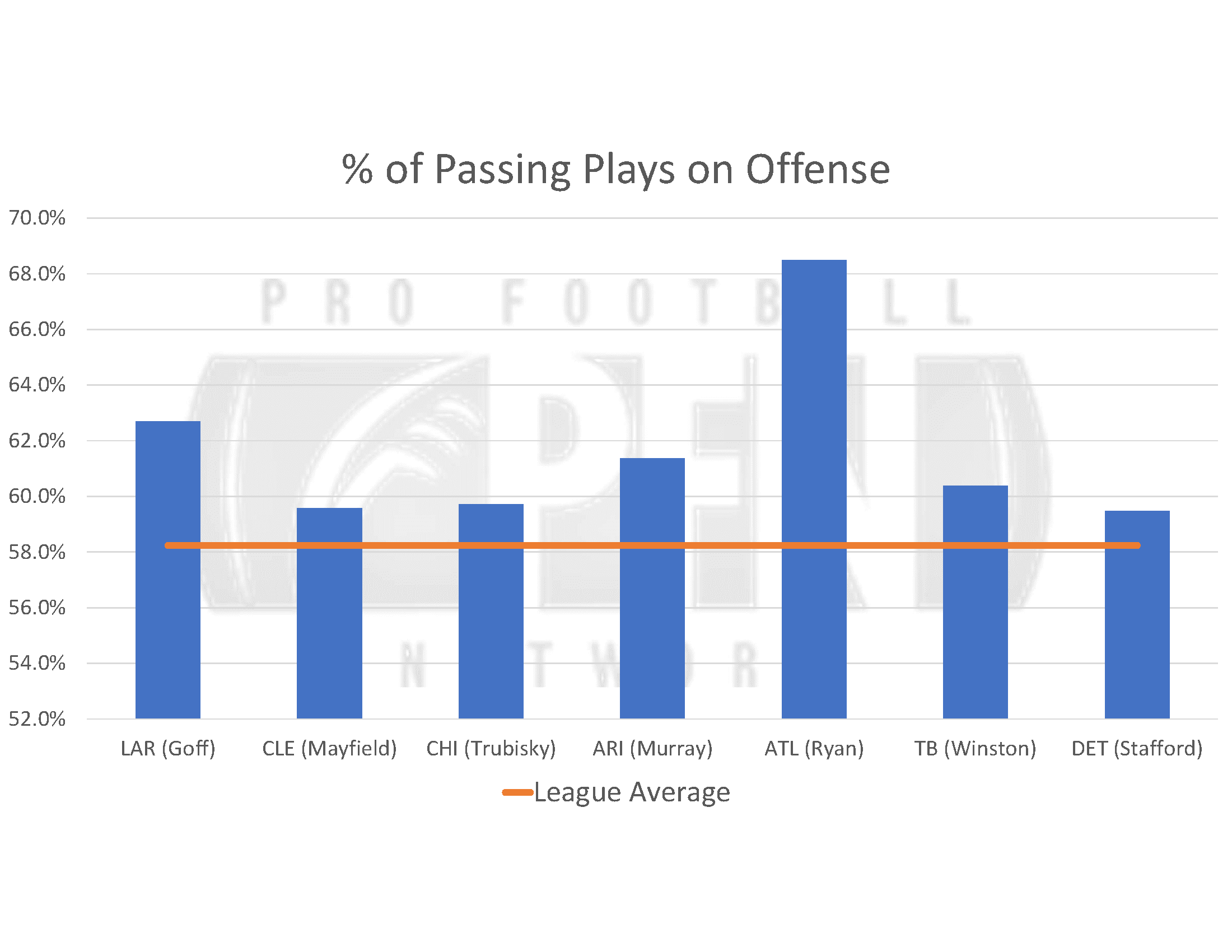 However, the distance of the pass play does matter.

There are two factors in yardage gained – the distance the ball is thrown prior to completion and the distance obtained by the receiver after completion. It makes sense that quarterbacks who throw farther downfield would have a higher PFN OSM, as they’re contributing more to the team’s production. 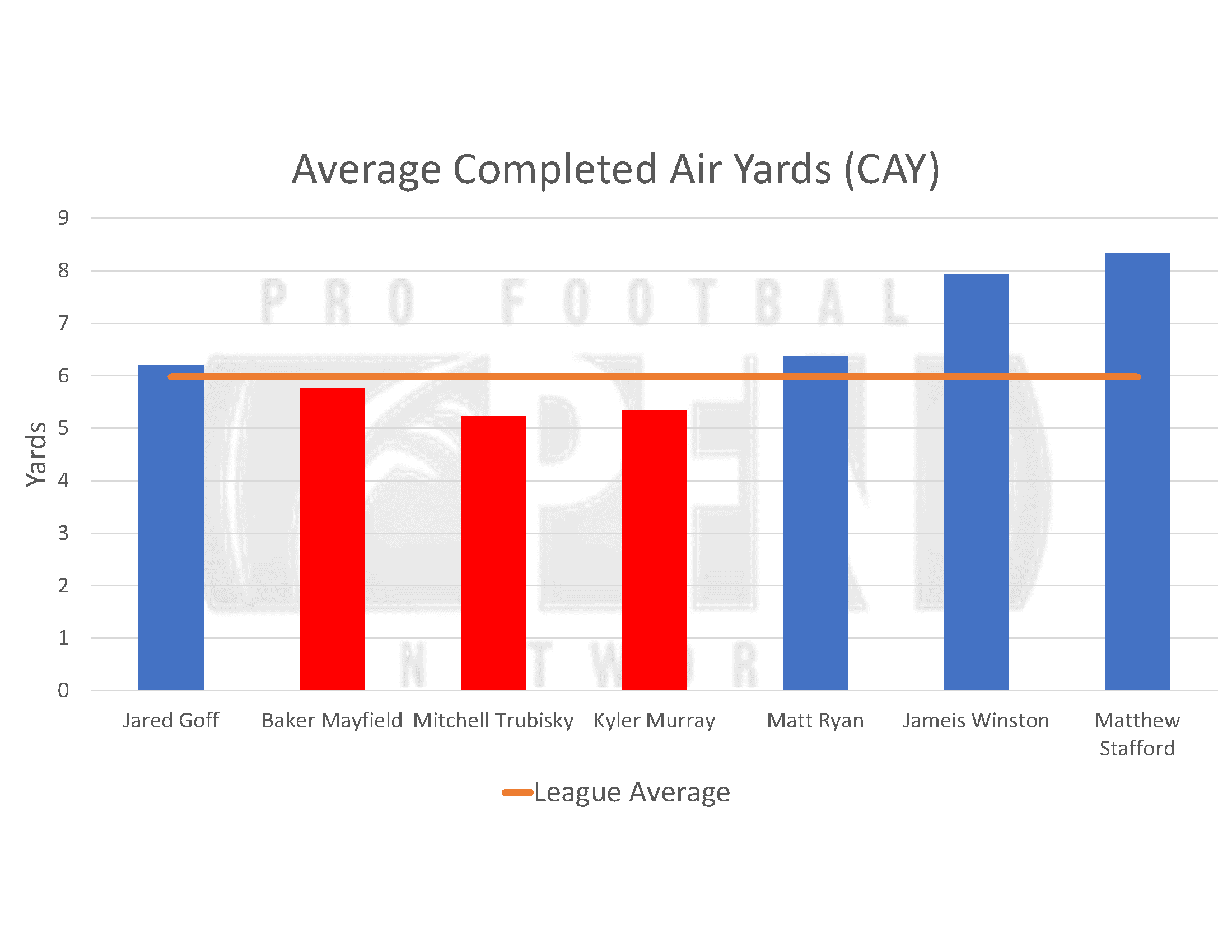 Get the first down, first.

Obtaining first downs allows an offense to control the time of possession, move the ball downfield, and most importantly, score. So, when a quarterback throws beyond the first down marker, the offense can be more productive – thus, a higher PFN OSM.

Consider the chart below, which shows the average yards per attempt beyond the first down marker. Most quarterbacks are throwing short of the stick. 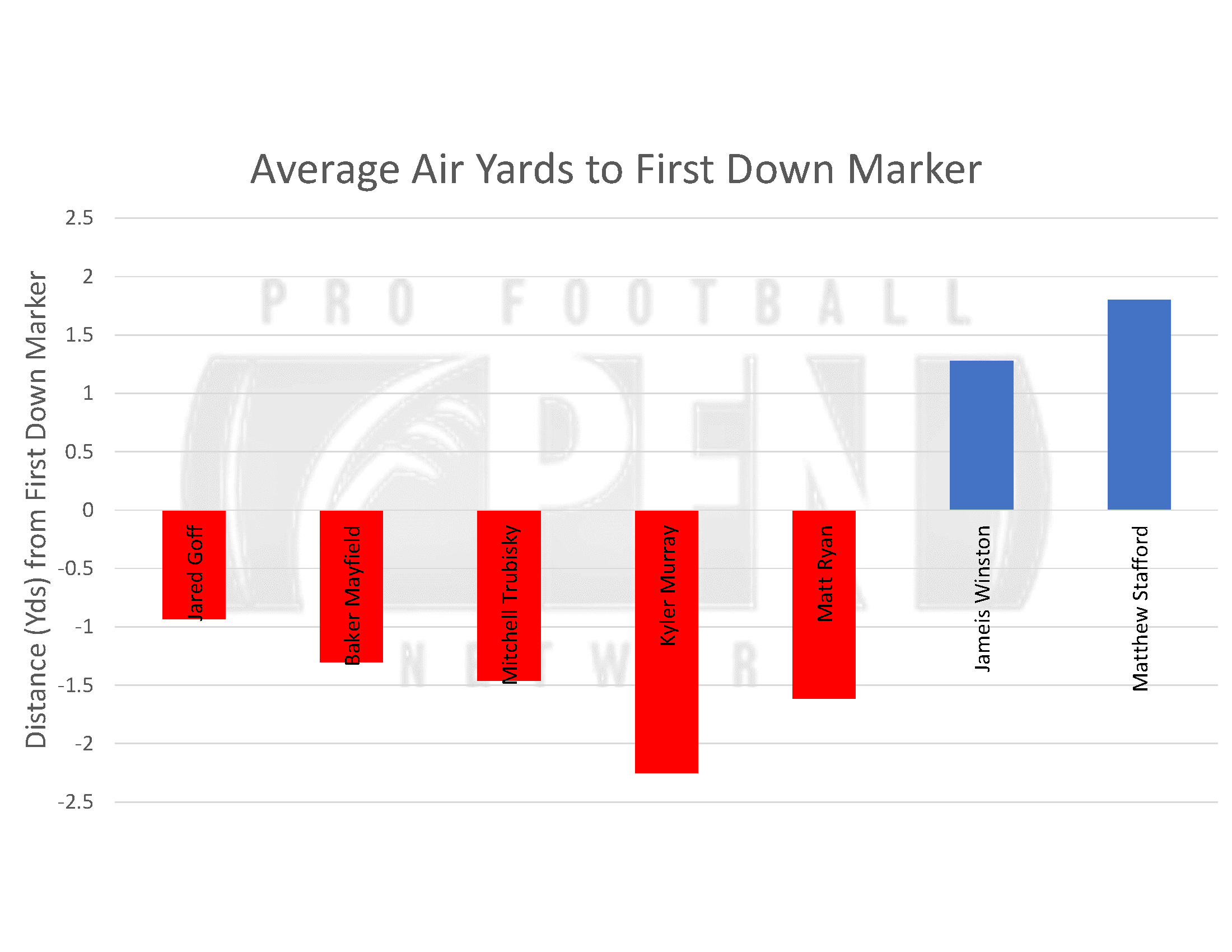 What does that mean, besides a lower PFN OSM? That the team is relying more heavily on other skill positions to obtain the first down than they are the quarterback.

Most of that is play design. We see a lot more slot receivers being utilized now than we did even a few years ago.  We’ve also seen more screen plays and shovel passes recently. But how often have we seen champions, like Tom Brady, consistently complete throws one yard beyond the sticks to keep a drive going? 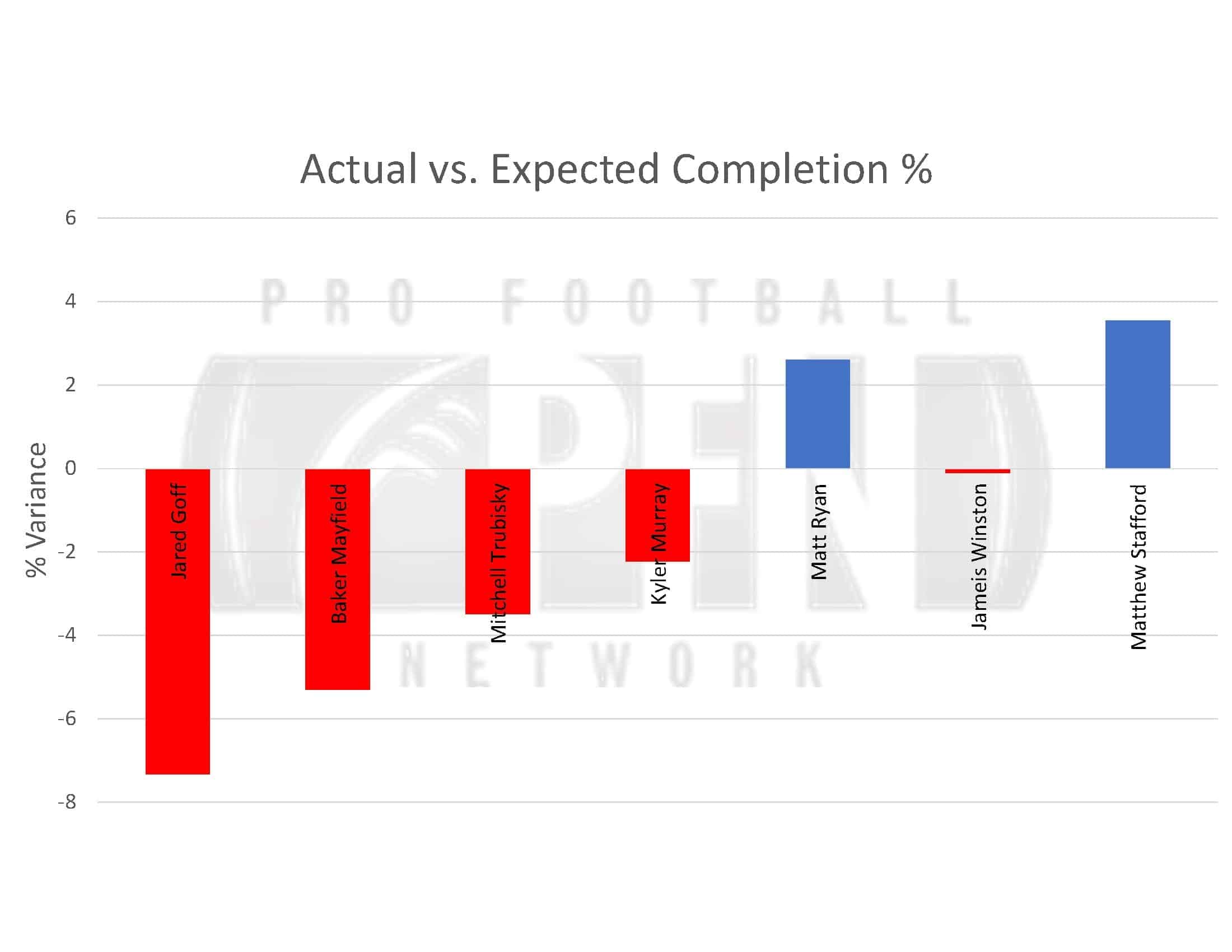 Quarterback accuracy is a factor here, but so is the pass protection from the offensive line, as well as the skills of the receivers being thrown to. A quarterback with poor accuracy, extra time in the pocket and lots of drops by his receivers will have a negative variance (Mayfield). A quarterback with higher accuracy, little time in the pocket and pass-catchers with good hands will have a positive variance (Stafford).

It’s somewhat surprising that Jared Goff – the quarterback with the lowest PFN OSM, who relies on his skill players to reach the first down marker and has the lowest expected completion variance – is the only one to have led his team to a winning record so far, this season. Regardless, the chance that any of these quarterbacks make it to the Super Bowl this year is dwindling.

Should you take the first QB off the boards in the 2020 NFL draft?

So, according to PFN OSM, is it worth it to draft the top-rated prospective NFL quarterback? Maybe. Odds are in favor of a top quarterback being more successful than a quarterback taken anywhere else.  Of the fifty-three Super Bowls played, fifteen have been won by a 1st overall pick.