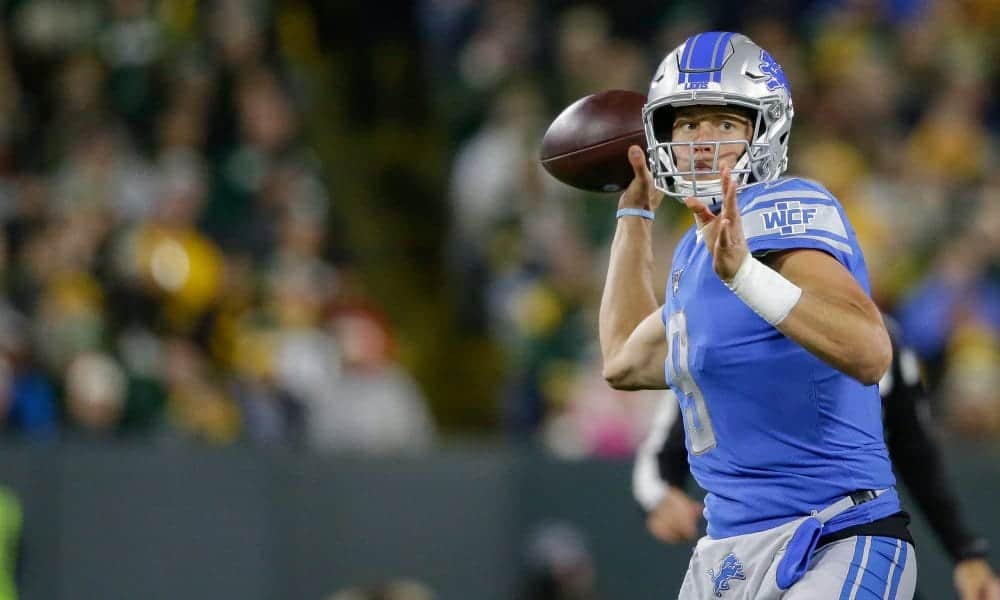 Photo Credit: Jeffrey Phelps (AP)
What's in this article? Click to show
The Good
The Bad
The Surprising

The NFL season is at the midway point. As always, it’s been a season of surprises and disappointments. Some players have elevated their teams to new highs. Others have struggled to prove they’re worth the value of their big contracts. Everybody loves to rank players, and here at Pro Football Network, we’re no different. What better place to start than with the most important position in sports? Here are our OSM midseason quarterback rankings.

The Most Valuable Player award in the NFL is primarily a quarterback award. Unless another skill player has a once in a generation performance, it’s unlikely that they stand a chance to take home the sport’s highest individual accolade.

What defines an MVP caliber performance? Arguments always rage as to what constitutes greatness from the quarterback position. Is it passing yards or passer rating? Does throwing 50+ touchdowns in a season automatically enter you into the MVP race?

All these are important, but they don’t fully paint the picture of an individual’s contribution to their team’s performance. For our midseason quarterback rankings, I’ll be using our Offensive Share Metric to provide an accurate picture of the good, the bad, and the downright surprising performances so far.

OSM determines how much of a team’s performance can be attributed to an individual. While most statistical analysis focuses purely on team performance, such as passing yards and completion percentage, where the statistics are the total of a combination of the efforts of multiple players, OSM isolates just the factors that an individual can control. As such, it gives an accurate indicator of an individual player’s contribution to their team.

OSM is graded out of 100, although it is near impossible to achieve this score. A grade of 40 or over can be considered an “elite” performance.

There isn’t much of a chance that Matthew Stafford lands the MVP award at this year’s NFL honors ceremony. However, he leads the way in our midseason quarterback rankings.

Since signing a then NFL record contract in 2017, Stafford has been trying to prove he’s worth it. No other quarterback has done more to help their team performance so far this season than him. The problem for Stafford is that the Detroit Lions are currently 3-4-1, and that isn’t a record that lends itself to indicating quarterback success.

Despite this, Stafford has twice posted elite graded games this year and consistently features in the top 10 quarterback performances.

In the Week 4 defeat to the Kansas City Chiefs, he had a grade of 42.90. Stafford put the Lions in a position to win with a nine-play, 79 yards, touchdown drive. Unfortunately, the Lions defense couldn’t hold firm, and the Chiefs took the win.

This has been the issue with the Lions this season. For all Stafford’s efforts, the Lions defense has been abysmal, and they’re losing games that they should be winning.

As well as leading our OSM rankings, Stafford also features highly on most statistical leaderboards as per NFL Next Gen Stats. He ranks 4th in passing yards (2499), 2nd in touchdowns thrown (19), and 5th in passer rating (106).

The Lions may be having an average season, but there is nothing average about the play of their quarterback.

Another NFL season, another Russell Wilson for MVP conversation. It feels like every year there is a discussion about Wilson’s status as an elite quarterback in the league. If the Seattle Seahawks are winning, it’s because of a good defense. If they’re losing, it all falls on Wilson. Let’s end that narrative right now.

Year in, year out, Wilson is one of the best quarterbacks in the league. His position in our OSM midseason quarterback rankings is a testament to his performance this year. The Seahawks are 7-2 in one of the toughest divisions in football this year.

Wilson’s standout game of the season, so far, came against a divisional opponent in the Los Angeles Rams. He threw three touchdowns, including the game-winner in the fourth quarter, on his way to an elite grade of 41.46.

Like Stafford before him, Wilson has regularly featured in the weekly OSM top 10 quarterback rankings.

Wilson leads the league in passer rating (118.2), and touchdown throws (22), and ranks 3rd in passing yards (2505). What’s been more impressive is how much of that yardage has come from Wilson himself. Whereas some quarterback figures are driven up by yards after the catch (YAC), he ranks towards the bottom of YAC per completion.

The Cleveland Browns were the darlings of the NFL pre-season. With big-name acquisitions such as Odell Beckham Jr and a multitude of high draft picks, they were all primed for success. That success would be delivered in the form of quarterback, Baker Mayfield, fresh off of a franchise-altering rookie campaign.

Alas, the Browns have been BAD this season. So has Baker.

Only Jacoby Brissett (17.49), Luke Falk (14.46), and Josh Rosen (9.86) have worse overall OSM scores as we collate our midseason quarterback rankings. Both Brissett and Falk are essentially back up quarterbacks that have been called into action due to retirement and injury respectively.

Mayfield is meant to be the leader and savior of the Browns franchise and right now, he isn’t.

“But Baker has more passing yards than Lamar Jackson, Jimmy Garoppolo, and Josh Allen” I hear you cry. That may be true, but over half of Mayfield’s passing yards have come after the catch. He isn’t responsible for that production.

Mayfield does lead the league in one statistical category this season, interceptions. Only Jameis Winston has thrown as many passes to the opposition, and none of Winston’s were as embarrassing as the Mayfield’s shovel pass to a New England Patriot in their 27-13 loss in Foxboro.

Goff signed a four year, $134 million contract extension in September. It’s a good job for him that he signed it before the season, as it may not be on the table after his performance this season. Goff ranks 35th in our midseason quarterback rankings.

Like Mayfield, Goff is an active demonstration of why passing yards isn’t the most effective metric to determine a quarterback’s success. He ranks in the top 10 for passing yards with 2367. However, 1147 of those have come from YAC. Cooper Kupp’s touchdown against the Cincinnati Bengals is a perfect demonstration of how the wide receivers can make a quarterback look good on paper.

This is further highlighted when you delve into Goff’s completion statistics. His completion percentage is just 61.1%, good enough (or bad enough if you prefer) for just the 29th ranked quarterback. Like Mayfield, his performance against expectation for completing passes is way down against his actual performance. His -5.5% differential is the third-worst, with just Cam Newton and Josh Rosen worse.

The Rams currently sit third in the NFC West after a 2018 campaign that saw them reach the Super Bowl. Goff got paid off the back of that season. The Rams need their quarterback to perform better over the second half of the year if they’re to achieve those heights again.

As I sat and wrote this analysis of our OSM midseason quarterback rankings, I originally intended to break it down to the good, the bad, and the ugly. Those bad performances from the likes of Mayfield and Goff could quite easily have fallen into the category of ugly, as well as bad. The original categories didn’t allow me to elaborate on the more surprising stories that arose from the OSM grades. Some of the more surprising grades fall somewhere between the good and the bad.

Grades like those of Aaron Rodgers and Tom Brady, for example.

Rodgers, by most opinions on the game, is having an MVP caliber season. The Packers are 7-2, and on course for their best season for a while. After a defensive slug-fest to open the season against the Chicago Bears, Rodgers appears to be clicking in Matt LeFleur’s offensive system and the Packers are putting up 20+ points in every game since. He ranks 5th in the league for passing yards and his 17 touchdowns are the 4th best in the league.

His completion percentage, differential, air yards per completion, and the average depth of target are all middling. His YAC numbers are second in the league. Put simply, Rodgers isn’t the main reason that the Packers are successful.

The same can be said for Brady. Although the Patriots are cruising at 8-1, and Brady is 2nd in the league in passing yards, he only has an OSM grade of 22.41. It adds credence to the argument that the Patriots season has been built on the strength of their defense. It also confirms the argument that Brady has relied more on the talents of his receivers than on his own talents as he reaches the twilight of his career.

Minshew Mania and the Jackson conundrum

Brady may be in the twilight of his career, but some quarterbacks are just getting started. One of the more surprising stories of the 2019 NFL season has been the emergence of Gardner Minshew as a cult figure and leader of the Jacksonville Jaguars.

The OSM quarterback rankings tell a different tale and back up the decision to start Nick Foles for the Jaguars’ next game against the Colts. Minshew ranks last of the qualifying rookie quarterbacks, with an OSM grade of 20.01. It has been decreasing ever since his standout opening weekend performance, where he received a nearly elite grade of 38.93. The 2285 passing yards are more a testament to the performance of wide receivers like D.J. Chark, rather than to Minshew himself.

Finally, one of the more surprising stories of the 2019 NFL season has been the Baltimore Ravens. More specifically, the performances of Lamar Jackson and the offensive explosion. This was further intensified when they became the first team to defeat the Patriots in 2019.

Jackson has been one of the more polarizing quarterbacks in the NFL. Not just this season, but in his young NFL career. The question of is he a quarterback or isn’t he, follows him wherever he goes.

He appeared to answer that question in Week 1 with a dominant performance with his arm. Jackson was our number one ranked quarterback, with a phenomenal OSM grade of 59.12.

It was, however, a one-off performance. His overall grade for the season is 23.09, good but not as spectacular as you might think.

This is because OSM doesn’t take in to account the rushing traits that Jackson brings to the quarterback position. Despite his obvious throwing improvement from the last season, he remains a more potent threat as a rushing quarterback. The Ravens have built a potent rushing game in order to best utilize Jackson’s traits.

You can find a full list of the midseason quarterback rankings, right here, alongside all positional OSM data.