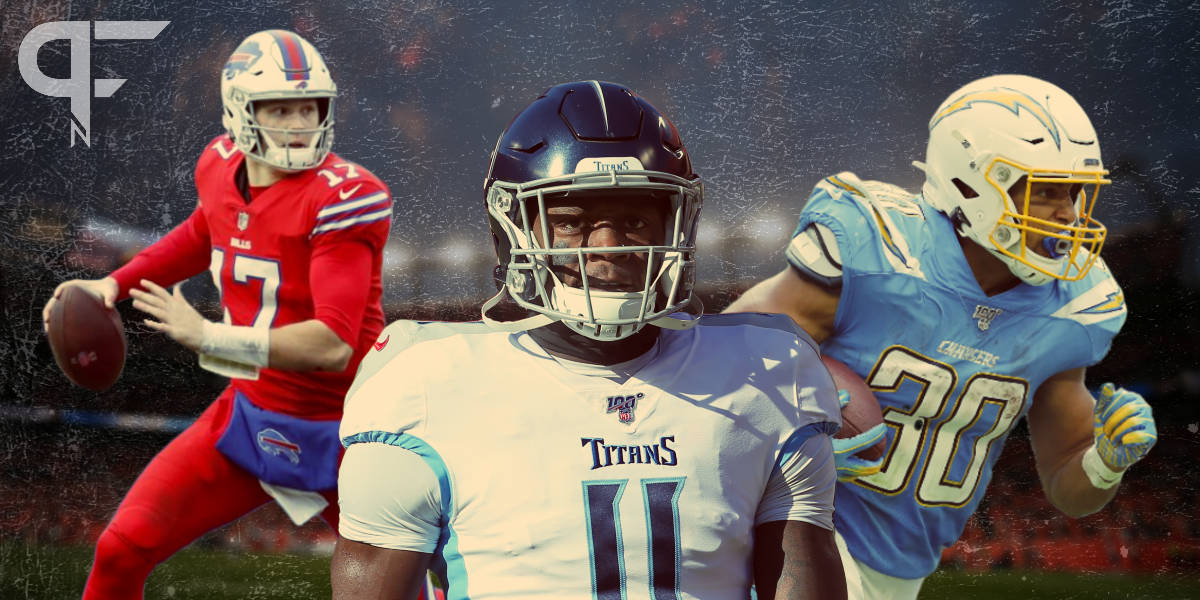 The longer we have in between games, the more time there is to allow views on players to change as they become more narrative-driven rather than what we are watching on the field. There is no longer break than the offseason, and by the time drafts roll around, we see several players being undervalued as well as several overvalued fantasy football players heading into 2020.

The offseason is great for reevaluating players’ situations and deep-diving into stats. However, it can also lead players down a rabbit hole of trying to use stats to direct the narrative into the one they like the best rather than what we actually saw on the field. In this list, I am going to cover some players who I think are being overvalued as we approach the start of the NFL season. Yes, they will all have had stretches where they were great weekly options, but I believe the risk given their ADP outweighs the upside.

This one is going to upset some people as there is a very vocal group that absolutely loves Josh Allen for various reasons. Everything from Allen’s massive arm strength to his rushing upside is used as an example of why he is the next best fantasy quarterback that has the “Konami Code” on his side.

Yes, I will agree that his floor is increased due to his rushing ability. He had nine rushing touchdowns in 2019, five of them coming from inside the 5-yard line. We talk about Allen being a detriment to both Devin Singletary and Zack Moss due to this, but what if Moss was brought in to reduce the need for Allen to score when their running backs couldn’t? For a quarterback who never passed for over 270 yards in a game, that is a scary thought.

Allen’s ADP of QB7 is too steep to pay for someone who finished inside the top 12 in just seven weeks last year, with only two finishes inside of the top 6. Yes, they added Stefon Diggs in the offseason, but I don’t think Allen is an accomplished enough passer to take advantage of this addition. Any regression in his touchdowns, which is volatile to begin with, makes me want to pass on him for someone like Carson Wentz, who is going as QB11.

As far as overvalued or fades go, this is a softer fade than other players I talk about. I like Austin Ekeler. I think he has a lot of talent, and his Instagram pictures make me want to put down the seventh slice of pizza. I am just worried about the lack of passing work he could see this year with Philip Rivers now a member of the Indianapolis Colts.

Ekeler was targeted 108 times in 2019, second only to Christian McCaffrey’s 142. There is no way Ekeler will come close to this in 2020. Jason Moore of the Fantasy Footballers put out a stat that since 2000, of the 25 running backs who have seen 100 or more targets and played in at least 11 games, the average drop off was 25 targets. Fourteen of those running backs lost more than 20, and 11 of those players lost more than 40 targets. Given the change at quarterback with Tyrod Taylor and all reports of this being a split with Justin Jackson, Joshua Kelley, and Ekeler. I have enough concerns to be willing to pass on Ekeler unless the value is too good.

I have Ekeler with 165 carries and 81 targets in my projections. If he can outperform his 3.9 yards per carry when he is the primary back and find the end zone, Ekeler can be a solid RB2. The problem for me is there are a lot of “ifs” for someone who requires this level of draft capital.

Adam Gase. The New York Jets. Do I have to say much else? We all know Gase does not like Bell. They drafted La’Mical Perine and brought in the man Father Time forgot in Frank Gore. It is just hard to get excited about Bell, who was for years one of the best backs in the league and fantasy football.

Usually, I would be ecstatic landing a player who just had 245 rushing attempts; however, when those resulted in only 789 yards (3.2 average), I am less optimistic. Thanks to his receiving upside, Bell finished as an RB2 or better 66% of the time. Bell still is a very talented running back but is handcuffed to a terrible coach. Why select Bell when you could choose players like Melvin Gordon, James Conner, D’Andre Swift, or even Mark Ingram, who are all going after him in ADP. Until his situation changes, Bell remains an overvalued fantasy football player in 2020 for me.

I love A.J. Brown, the player. I think he is an unbelievable talent that can blossom into an elite NFL wide receiver. WR13 though? Nope, I don’t see it happening in 2020. Unless he is hyper-efficient, Brown is being overvalued in fantasy football.

The Tennessee Titans have been below 59 plays per game in both 2018 and 2019. Unless there has been some massive change in philosophy, I see no real reason for a significant uptick, especially in the passing volume. Last year, the Titans’ 51.21% passing play percentage was 30th in the NFL. Even if we think the Titans run more plays and boost the total to 60.5, using last year’s splits, that’s 493 attempts. Also, if Brown sees the same 20% target share, that’s only 98.7 targets. For a team’s WR1, that is dangerously low to rely on unless he is unbelievable with every reception.

A.J. Brown’s eight catches of 40 yards or more are the highest we have seen in the last 15 years. Combined with his reliance on touchdowns for weekly fantasy points, I have a hard time drafting him as my team’s WR1. I’d much rather look at players like Robert Woods, Adam Thielen, or even D.K. Metcalf. Give me D.J. Chark if I am going for high upside as Chark will easily surpass 125 targets or more on a team who will be throwing from behind all season.

Amari Cooper is a fantastic NFL wide receiver. That doesn’t mean he is a fantastic fantasy football wide receiver. In 2019, Cooper finished as a WR1 four times. He also finished outside of the top-48 four times. Cooper won you just as many weeks as he lost you last year. Why are we drafting a boom or bust player at WR11? He might have finished as WR9 last year, but go ask someone who had him in 2019 how they felt about his season.

This season, he now has to compete with Michael Gallup and CeeDee Lamb for targets, which isn’t going to help fantasy owners trust him when plugging him into their starting lineups. Cooper is one of the most overvalued fantasy football players in 2020 across the board and will be someone who won’t be on any of my fantasy teams this year.

2019 was a tale of two seasons, and we have to figure out which side we choose to believe. There is the side where Tyler Higbee is a top fantasy tight end or that the loss of Gerald Everett leads to his fantasy dominance in that latter half of the season. I choose option B.

From Week 1 through 10, Higbee had 26 receptions on 33 targets for 212 yards and one touchdown while never going over 47 yards in a single game. Then from Week 11 through 15, Higbee saw increases across the board. During that stretch, he had 43 catches on 53 targets for 522 yards and 2 touchdowns, including four straight weeks of 100 or more yards receiving. So what changed? He wasn’t splitting targets, and the Los Angeles Rams went to a predominantly 12 personnel. 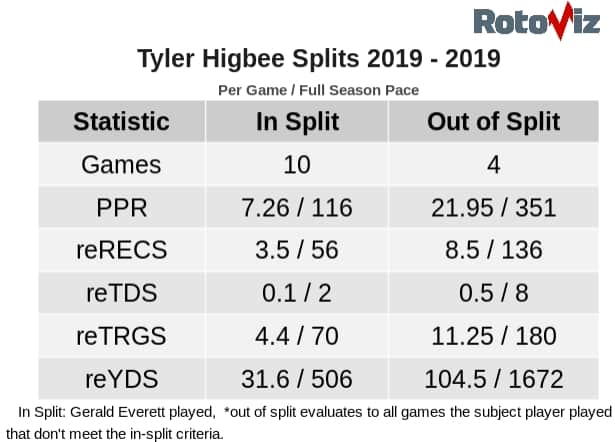 The TE7 ADP for Higbee is one of the most overvalued fantasy football players for me heading into 2020 drafts. I would actually rather have Everett at his ADP of TE29 over Higbee and get someone like Jonnu Smith or Hayden Hurst later in drafts.

If you draft Rob Gronkowski, do you know what you are even getting? Sure, the once-retired tight end could see a resurgence and return value, but there are far too many risks. Chris Godwin is going to eat up targets over the middle, and unless Gronkowski can be incredibly productive from a touchdown standpoint, I think you are looking at his ceiling where he is being drafted.

I love the image in my head of him spiking footballs in the end zone with the cannons blasting. However, unless he drastically falls to me in a draft, I will likely be watching this while he is on someone else’s starting roster. There is enough hype for his return that I bet someone reaches on him before I am willing to pull the trigger.

Be sure to follow us on Twitter: @PFN365 and @PFNDynasty to stay up to date with all things around the NFL and the 2020 fantasy football season. Also, continue to visit Pro Football Network for NFL news and in-depth analysis while also visiting our Fantasy Football section for more coverage and up-to-date rankings.