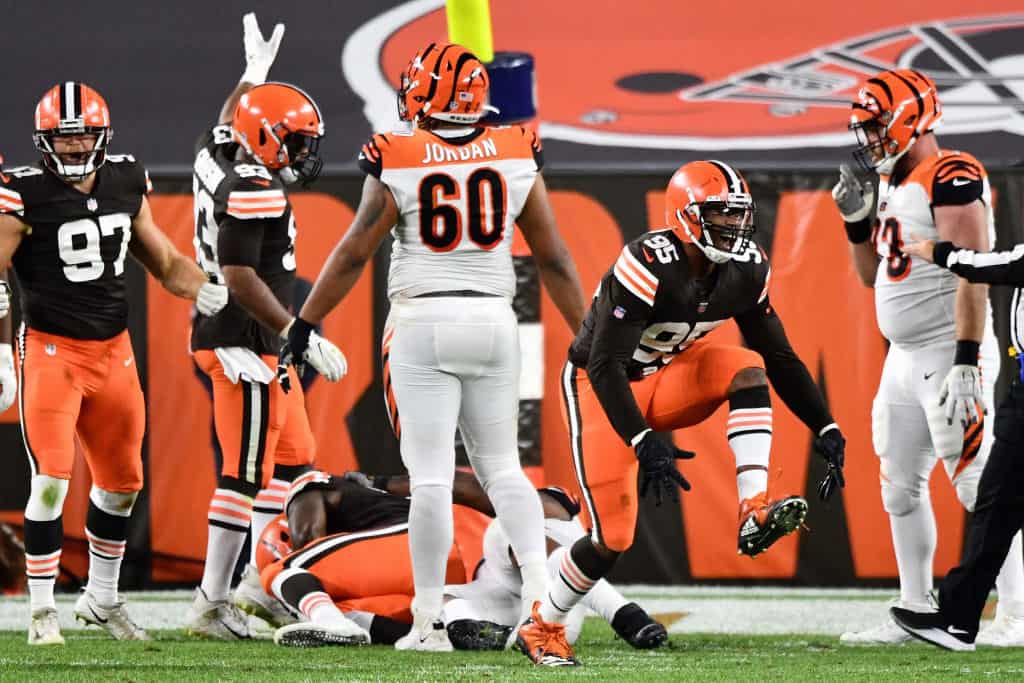 CLEVELAND, OH - SEPTEMBER 17: Myles Garrett #95 of the Cleveland Browns celebrates after sacking quarterback Joe Burrow #9 of the Cincinnati Bengals and forcing a fumble that Cleveland recovered in the third quarter at FirstEnergy Stadium on September 17, 2020 in Cleveland, Ohio. Cleveland defeated Cincinnati 35-30. (Photo by Jamie Sabau/Getty Images)
What's in this article? Click to show
Burrow battered as Browns beat the Bengals in Week 2 opener
The Browns defense was faster, stronger, and more explosive than the Bengals offensive line
RAS helps explain why the Browns were so defensively dominant
Garrett is one of the most athletic freaks to enter the NFL in recent times.
Two additional athletic specimens caused the Bengals offensive line nightmares in the Week 2 loss to the Browns

In a surprisingly entertaining Thursday Night Football clash, the Cincinnati Bengals fell to the Cleveland Browns to open Week 2 of the 2020 NFL season. It was the second straight defeat of the Joe Burrow Bengals era, but the rookie quarterback out of LSU wasn’t the problem by any stretch of the imagination. Burrow was subjected to a night of harassment and battery behind an offensive line that was simply outplayed, overpowered, and overwhelmed.

Burrow battered as Browns beat the Bengals in Week 2 opener

Burrow faced pressure all night long, with the Browns defense finding their way into the backfield with alarming ease and regularity. Although they found success off the edge, their ability to create interior pressure was even more impressive — especially in the first half.

By halftime, the Browns defense had already sacked Burrow twice for a loss of 20 yards. The defensive line alone created 10 quarterback pressures, resulting in four quarterback hits, as Kevin Stefanski’s team blitzed on 20% of their first half plays.

When Baker Mayfield took a knee to bring the Bengals and Browns Week 2 clash to its conclusion, the Browns defense had amassed a laundry list of defensive statistics.

It is a testament to Burrow’s ability that despite that onslaught, he still threw for 316 yards with a 60.7% completion percentage and three touchdowns to zero interceptions ratio. Multiple fourth-down conversions helped keep the Bengals in the game.

Burrow may be a rookie, but he already looks like he belongs in the NFL. However, if the Bengals ask him to throw 60 times a game behind that offensive line, he isn’t going to survive too long in the league.

It wasn’t just Burrow who suffered as a result of the ineptitude of the offensive line. As Nick Chubb and Kareem Hunt ran roughshod over the Bengals defense, Joe Mixon and Giovanni Bernard struggled to impose any sort of run game for Cincinnati.

While the Ravens managed to put up 111 yards at 3.7 yards per carry in their opening day win over the Browns, the Bengals could muster just 68 yards at 2.8 yards per carry in Week 2. Mixon labored to 46 yards on 16 attempts, while Burrow added 19 yards from his seven carries.

The Browns defense was faster, stronger, and more explosive than the Bengals offensive line

It was clear on the field that the Browns defensive line was simply too much for the Bengals offensive line in Week 2. They were faster, more explosive, and physically overwhelming.

When you consider the athletic profiles of the two teams in the trenches, it shouldn’t really have been a surprise that the Browns would hold a distinct advantage.

Using Relative Athletic Score (RAS), we can show just how overwhelming that athletic mismatch was. RAS uses a simple 1-10 grading scale across several athletic components, such as size and speed, to create an overall score. Of course, athleticism is no guarantee of success on the field, but it does allow us to see how a player can win one-on-one.

RAS helps explain why the Browns were so defensively dominant

Let’s start by taking the units as a whole before looking at how individual players overwhelmed the man opposite them as the Bengals and Browns went to battle in Week 2. The Bengals offensive line had an average RAS of 5.10 across their five starters, a relatively mediocre overall score. By contrast, the Browns starting front four on the defensive line had an average RAS of 8.53.

The Browns held a considerable athletic advantage over the Bengals in Week 2.

The athletic jewel in the Browns defensive crown, Myles Garrett, provides the most obvious example of how the Bengals offensive line was overwhelmed in their Thursday night defeat.

Garrett is one of the most athletic freaks to enter the NFL in recent times.

His 9.99 RAS is made up of a combination of good size, elite explosion, and elite speed. Not only is Garrett fast, but he also combines that speed with elite strength. His 33 bench press reps at the NFL Combine earned him a 9.76 score.

I had expected Garrett to go up against left tackle Jonah Williams in the Bengals and Browns Week 2 matchup, but Browns head coach Kevin Stefanski lined Garrett up predominantly against the right side of the Bengals offensive line, and he feasted on Bobby Hart and Fred Johnson all night long.

Hart has the worst athletic profile on the Bengals offensive line with a RAS of 1.59

Hart received very poor grades for both speed and agility, with a poor explosion grade. Although his size and weight ensured Hart received a great grade for size, his 22 bench press reps at his Pro Day received a score of just 3.51.

Although Johnson had a slightly higher RAS than Hart at 3.48, their athletic profiles are similar in that they lack speed, agility, explosion, and strength.

Both Johnson and Hart are the polar opposite of Garrett from an athletic standpoint, and it showed on the field. Garrett accounted for nine of the Browns quarterback pressures and three quarterback hits. Garrett easily got the better of Johnson to force the fumble that led to a Chubb touchdown, stretching the Browns lead to 28-13.

After being overwhelmed and overpowered in their Week 2 loss to the Browns, the Bengals offensive line will have to contend with one of the most athletic defenses in the NFL in Week 3. Cincinnati travels to Philadelphia to play the Eagles, and athleticism has historically been the hallmark of defensive coordinator Jim Schwartz’s units.

The Bengals will very quickly need to find answers to the questions the Browns posed to Cincinnati’s offensive line on Thursday night. Otherwise, it could be a battering for Burrow in the city of brotherly love.