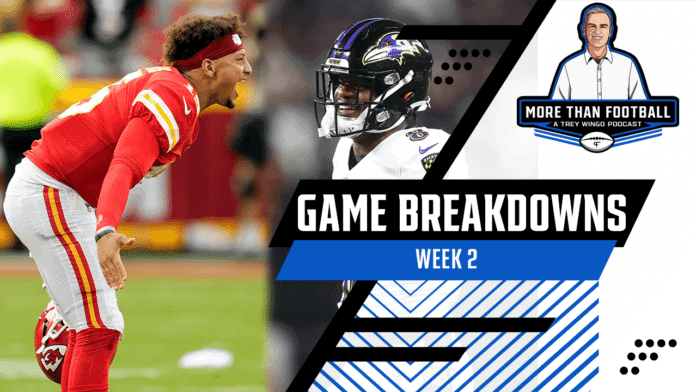 In this NFL Week 2 preview of More than Football, PFN's Trey Wingo and Brett Yarris look at some of the biggest games on the slate.

In this week’s episode of More Than Football, Pro Football Network’s Chief NFL Analyst Trey Wingo and host Brett Yarris look ahead and preview five games on the NFL’s Week 2 slate. Not only do they preview the games, but they also take a deep dive into some of the more interesting storylines. Furthermore, the two take the time to discuss the results of Thursday Night Football.

Thursday Night Football: Chase Young vs. Daniel Jones, who came out on top?

Before getting into their preview of the Week 2 slate, Trey and Brett look back at a fun Thursday Night Football NFC East clash between the New York Giants and Washington Football Team.

In what many expected to be a defensive slugfest, Daniel Jones and Taylor Heinicke went toe to toe in an offensive battle. Heinicke ultimately prevailed 30-29, but Jones still had one of the more impressive performances of his young career.

Do the Chiefs keep rolling, or do the Ravens get off the snide? Will the Dolphins stay in control of the AFC East, or do the Bills even the score? Does Jalen Hurts keep pace with his Week 1 performance against the 49ers?

After their embarrassing loss last week, can the Colts correct the course against a rejuvenated Matthew Stafford and the Rams? Dak Prescott and the Cowboys came close against Tom Brady and the defending champs. Do they get it done against the young gun Justin Herbert and the Chargers?

Trey and Brett try to answer all of those questions and more when breaking down the Week 2 NFL slate.