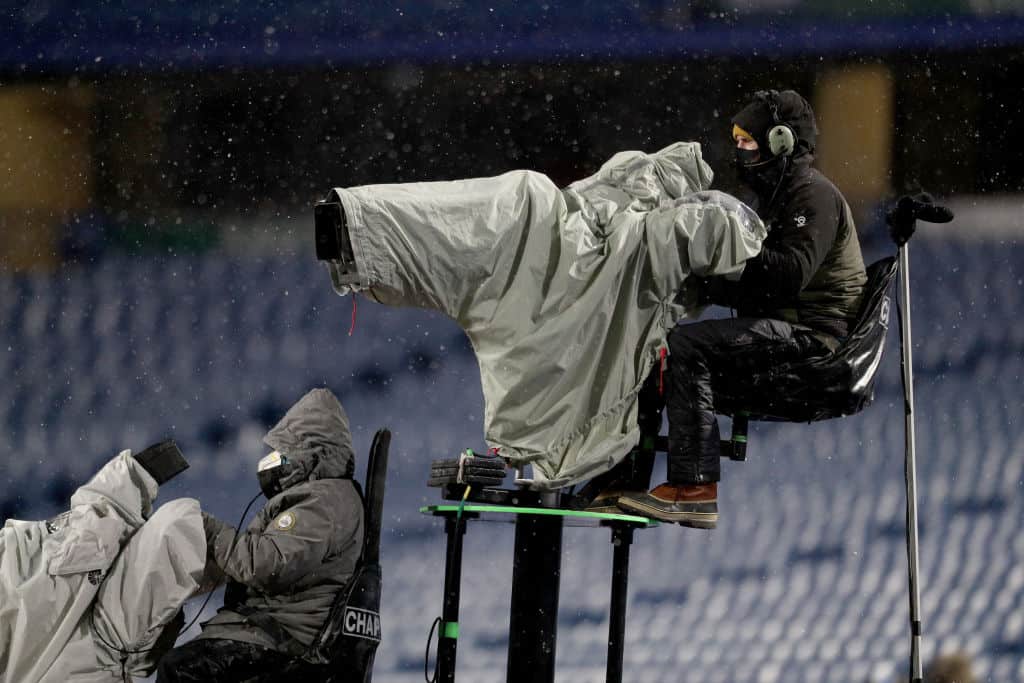 ORCHARD PARK, NEW YORK - DECEMBER 13: Snow falls on camera operators during a game between the Buffalo Bills and the Pittsburgh Steelers at Bills Stadium on December 13, 2020 in Orchard Park, New York. (Photo by Bryan Bennett/Getty Images)
What's in this article? Click to show
Are NFL ratings up or down from last season?
The NFL’s 2020 TV ratings need some context
The NFL is doing just fine in the grand scheme of things despite lower TV ratings in 2020
Want more NFL news and analysis?

While the NFL continues to expand its popularity into a more global sport, domestically, it has never been more secure. Given the unprecedented circumstances of the previous year and uncertainty surrounding the season, what impact, if any, did it have on the NFL’s TV ratings in 2020?

Are NFL ratings up or down from last season?

No one was safe from the effects of the global situation last year, especially sports. From the uncertainty of a season, changing game schedules, to a change in priorities in its viewers, numbers were down.

In 2020, the audience for the regular season NFL games dipped across all broadcast networks. This comes on the heels of two years of growth in viewership numbers.

According to Nielsen, excluding rescheduled games, the 2020 regular season averaged 15.4 million viewers either live or on the same day of the broadcast. That is a 7% drop from the previous regular season. It was the lowest average audience since 2017. When all televised games are included (rescheduled games as well), the average audience dropped to 14.9 million viewers.

Breakdown of the main broadcast networks over 2020

The 2020 Super Bowl saw its lowest TV ratings in years

Just 91.6 million people on CBS watched Super Bowl LV, according to a Nielsen report. This marked the lowest number of viewers for the game on broadcast television since 2006. When all platforms are included, like streaming services and mobile, the threshold goes to 96.4 million — the lowest number since 2007.

The game had a 38.2 American household rating and was viewed in an average of 46.2 million homes. According to the report, 68% of US homes with televisions in use were tuned to the Super Bowl LV telecast.

Even if the numbers hadn’t been down all season, the way the game played out has a large part in the NFL’s TV ratings. While from a narrative point of view, Tampa Bay against Kansas City was enticing. Yet, the game wasn’t, honestly. Largely over at halftime, and the Chiefs could not make a dent early in the second half had people tuning out.

A decline in Super Bowl TV ratings is nothing new to the NFL, though. After peaking at 114 million television viewers in 2015, the Super Bowl’s television ratings have declined in five of the past six years.

The league is a dying sport! I can hear it now. First off, sit down and put on some pants. Second, let’s throw some cold water on those fires with something called context.

The global situation disrupted every single sporting event in the US, not just the NFL’s precious TV ratings

You could combine every viewer from each game that watched these other sports and not equal the total who watched Super Bowl LV.

No one was safe from its effects in 2020, not even the companies who covered all of these sports. It seemed like every other day, a company was laying off people due to a drop in revenue. That money comes in from viewership.

Of the top 100 most-watched shows of 2020, 69 of those were NFL broadcasts. That includes every awards show, every sporting event, and even every debate from the last presidential election.

No other professional sport made it into the top 100, let alone have a 69% majority. The only spot to hit the list is the NFL’s minor league, the NCAA.

When compared to their competition, the 7% drop shows there is no competition for the NFL in views and ratings. They are the king of content in the US.

Historically, during an election year like 2020, the NFL’s TV ratings drop. After the election, we saw numbers trending back up. 2021 should continue to move the needle back up to the mean across all sports. The closer we get to normal, whatever “normal” is anymore, the more people will be tuning into their favorite team and consuming content. After all, what else is there for us to do right now?