The NFL Team of the Week in Week 2 is a who's who of NFL greats and burgeoning stars. Who made the cut after this week's action?

NFL Team of the Week for Week 2 | Offense

These were the stalwart defensive performances from Week 2. 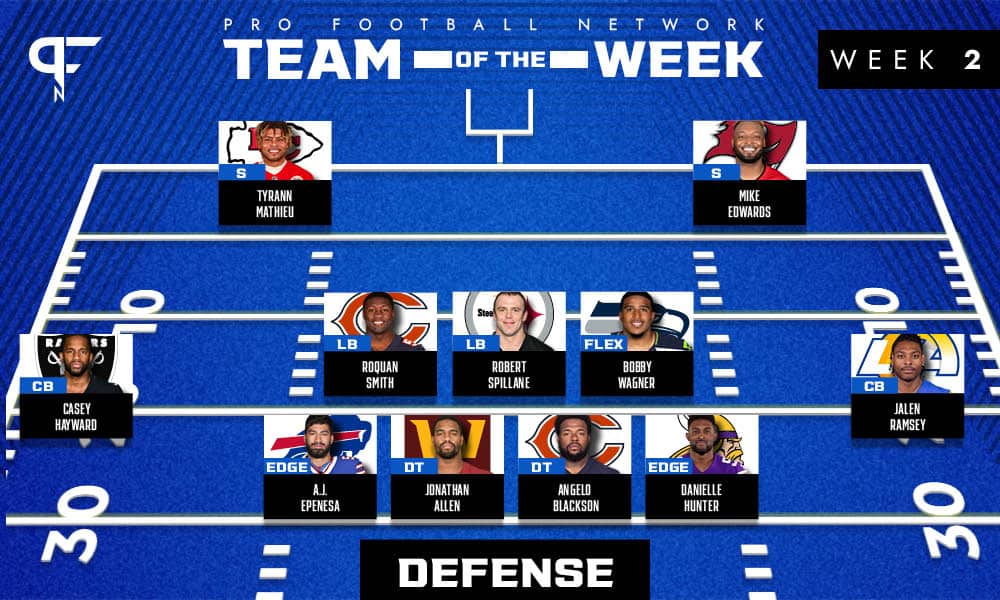 Though his teammate Gregory Rousseau got credit for 2 sacks, it was A.J. Epenesa who truly wrecked the game. Routinely speeding around the edge, Epenesa was consistenyly in the backfield against Miami. The second-year pro is well on his way to a historic season if he keeps up this pace.

It was also Epenesa’s hit that unfortunately sidelined Miami Dolphins QB Tua Tagovailoa. He didn’t get credit for the sack, but he absolutely altered the game with that hit.

You didn’t have to look far to find Jonathan Allen’s disruption on Thursday Night Football. He was in the face of Daniel Jones all night long, casually taking on double-teams and winning. Allen recorded 2 sacks, doing so on the strength of his pass-rush technique and athletic motor.

The stout interior lineman will land on our NFL Team of the Week more often with games like this. And that should frighten NFL offensive linemen.

There may not be a more athletic statistical showing for a defensive tackle than what Angelo Blackson accomplished on Sunday. The 28-year-old finished with 3 tackles, a handful of QB pressures, and an interception. Blackson was a constant presence in the face of Bengals linemen, winning easily at times while stopping Joe Mixon at the point of attack.

Welcome back, Danielle Hunter. After missing the entire 2020 season, Hunter was a force off the edge in Week 2, posting 2 sacks against the Cardinals. He chased down Kyler Murray more often than not and didn’t allow the league’s 2-week MVP out of containment much.

Hunter also pursued Arizona’s running backs off the edge, forcing them inside on seemingly every carry. Hunter is back, and it doesn’t seem like he’s lost a step at all.

Playing out of position due to Danny Trevathan’s injury, Roquan Smith put on an impressive display of athleticism and versatility against the Bengals. Smith’s highlight-reel play came when he intercepted Burrow with one hand, juked his way through defenders, and scored on a 53-yard pick-six. However, that wasn’t all the former first-round pick did in Week 2.

Smith sacked Burrow on one occasion and was a terrific blitzer when called upon. He also patrolled the middle of the field in the run game, limiting Mixon to just 3.4 yards per carry on the ground.

Sure, the Steelers didn’t get the win, and they allowed Derek Carr to throw the rock all game long. But that certainly wasn’t due to Robert Spillane’s ineffectiveness or all-around play. In fact, the Raiders may have altered their game plan because of Spillane. For most of the contest, Las Vegas didn’t even attempt to run the ball due both to the loss of Josh Jacobs and Spillane’s play.

Spillane recorded 10 total tackles, but it was where he recorded them that counted. He was constantly making plays at or around the line of scrimmage, pushing ball carriers to the boundary, and even pressuring Carr at times. It was truly an all-around performance for Spillane.

If his performance against the Steelers is any indication, age has not caught up to Casey Hayward. Routinely guarding burgeoning Pittsburgh star WR Chase Claypool, Hayward was terrific in coverage at all levels. He made multiple plays on the ball against Claypool, including 2 pass breakups on deep shots.

Hayward went down with an injury late, but if he is as healthy as he was to start the game, AFC West quarterbacks will need to know where he is on every snap.

The league’s best cornerback is hardly going to be targeted this season. That’s what makes Jalen Ramsey’s play and statistics even that much more special. Targeted less than a handful of times against the Colts, Ramsey didn’t allow a first down and recorded an interception. It’s the way he plays the game that sets him apart, and his target-to-interception ratio that will keep him at the top.

Mike Edwards ended any hope of a Falcons comeback on Sunday by returning 2 Matt Ryan interceptions for touchdowns in the fourth quarter. Edwards beautifully patrolled the middle of the field, but his play as a coverage defender is what set him apart. He was always with his receiver and always in on the play.

When he wasn’t grabbing interceptions, Edwards was posting pass breakups in what was a dominant showing, one that was beyond worthy for our NFL Team of the Week.

Talk about starting off the game with a bang. Tyrann Mathieu recorded 2 first-quarter interceptions, including a red-zone stop and a pick-six. Mathieu patrolled center field admirably all game, but his splash plays put the Chiefs on top and kept them there for the majority of the game.

You are not reading this incorrectly: Bobby Wagner recorded 20 tackles against the Titans on Sunday afternoon. He had 16 solo tackles and 4 more assists against Tennessee’s rushing attack, more often than not stuffing rush lanes and keeping contain on Derrick Henry. Seattle’s defense bent at times, but it was not Wagner doing the bending.

The future Hall of Famer is the NFL’s active combined tackle leader by more than 100 tackles, and he only increased his lead with this performance.

Which special teams players made our Week 2 NFL Team of the Week?

He didn’t kick the game-winner in the end, but for all intents and purposes, Graham Gano single-footedly gave New York a chance. While his team was largely ineffective in the red zone, it was Gano who scored a whopping 18 points. He’s set a Giants record by making 35 consecutive field goals and is now closing in on the NFL record of 41 straight (set by Mike Vanderjagt).

Is it time to start thinking about Gano as a Hall of Fame kicker?

Aside from a few splash plays, the 49ers largely kept the Eagles at bay on Sunday. Mitch Wishnowsky was crucial to that success, pinning Philadelphia inside their own 20 on three occasions while averaging 45.2 yards per punt. Of those booted inside the 20, two of them were downed inside the 7-yard line.

When you are the only return man to score a touchdown, your spot as the returner on our team of the week is pretty secure. Jamal Agnew gave life to an otherwise-defeated Jaguars team when he returned a kickoff 102 yards for a score late in the fourth. He had 2 returns on the day, but his highlight-reel touchdown was the sight to see.